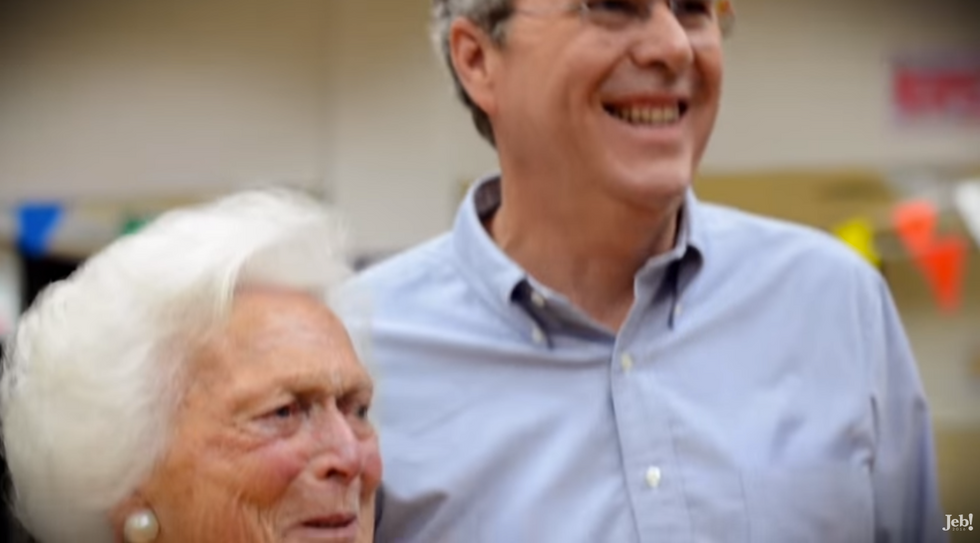 We're going to need a bigger file drawer for this latest entry under Sad Jeb Bush Is Sad, So Sad, Gahhh, We Need A Drink, That's How Sad He Is. His own mother, who has made it quite clear she doesn't care for him much and thinks he's kind of a loser (and she's not wrong!), made an ad for Jeb, and it is the least enthusiastic, lowest-energy display of reluctant obligatory love a mother has ever shown for something she birthed from her own loins:

Jeb has been a very good father, wonderful son, a hard worker. His heart is big. When push comes to shove, people are going to realize Jeb has real solutions. Rather than talking about how popular they are or how great they are. He's doing it because he sees a huge need, and it's not being filled by anybody.

Of all the people running, he seems to be the one who could solve the problems. I think he'll be a great president.

You have to watch the ad to appreciate the complete BORED NOW tone of Barbara Bush's voice throughout the entire 30 seconds she sits there reciting her scripted lines that Jeb's OK, she guesses, and he "seems" to be better than the other guys, whatever, sigh, is it cocktail hour yet?

Even her subtle dig at Donald Trump is quarter-hearted at best. The guy's been running around the country for months, getting huge laughs and applause lines for beating the crap out of Jeb and stealing his milk money and talking about what a loser he is, and Bar ... meh, she probably agrees with him, so the best defense she can offer to such cruelty toward her own child is that people will eventually realize Jeb is better, kind of. Maybe.

Also, Jeb has a note from his mom. No, we are not kidding. It is handwritten and asks American voters to please excuse Jeb from class early today and also, "please vote for Jeb," even though she didn't want him to run for president in the first place.

[contextly_sidebar id="W3uUU8xOQGXTcSHSk7ZQKCXRUDmCBLy2"]At least it's something. As far as we know, Jeb's dad -- who, it turns out, never had high expectations for the boy or considered him The Smart One -- remains undecided.