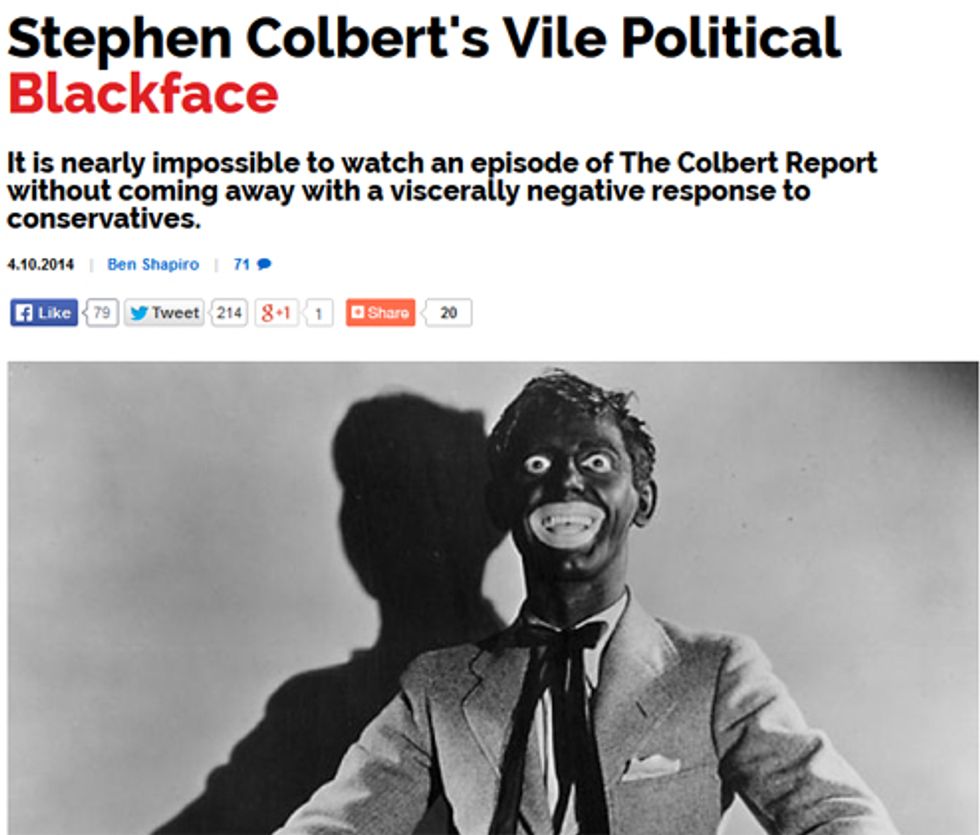 America,feculent dastardling Ben Shapiro is offended. He is very offended. His dudgeon is, in fact, quite high indeed. You see, he realized something yesterday in all the fuss over the announcement that Stephen Colbert would replace David Letterman as host of CBS's The Late Show: Liberals get all offended by blackface, which is a performance style characterized by broad, exaggerated, stereotypes of The Blacks. (By the way, The Blacks shouldn't be offended when white fratboys do blackface, because it is just a joke, and the good blacks have no truck with the grievance industry.) And yet, no one seems to be offended by the fact that for years now, Stephen Colbert has been doing exactly the same thing by pretending to be a character based on broad, exaggerated stereotypes of Conservatives. Is this not hypocrisy of the worst sort?

This routine, in which Colbert plays at conservatism in order to portray it as unendingly ugly, should be labeled for what it is: vile political blackface. When Colbert plays “Colbert,” it’s not mere mockery or satire or spoof. It’s something far nastier.

Oh dear. It looks like we are in for quite the snit.

And here is what is so unfair of Colbert's comedy -- in pretending to "agree with" fine, upstanding American patriots like Bill O'Reilly and Rush Limbaugh, Stephen Colbert "out-Archie Bunkers Archie Bunker." He presents a caricature of conservatives as racist, sexist, and ignorant, and of all people of faith as ignorant brutes who persecute gays. (The fact that Stephen Colbert is a devout Catholic who testified for immigration reform because he believes that we must care for the least of our brothers does not enter into this, thank you very much). And this, says contemptible fuckbeetle Ben Shapiro, is just not fair, and is, exactly like the old minstrel shows, an instrument of oppression:

We suppose it might be worth pointing out here that a lot of Colbert's material consists of quoting conservatives verbatim, and then pushing those ideas just a couple of notches further. But you see, in those exaggerations, Colbert is unspeakably racist against conservatives -- "Colbert’s shtick," explains Shapiro, is

based on creation of a character who doesn’t exist, but the audience is supposed to believe does exist in type. “Colbert” may not be real, but his audience thinks that Colbert’s Conservativeface resembles reality closely enough to suffice as a stand-in for conservatism. Which means that when they do encounter conservatism, they’re firmly convinced they’re looking at “Colbert-ism” in disguise.

How vile! Also, liberals are so stupid that they are incapable of telling the difference between an over-the top parody like "Colbert," and a completely serious conservative like Bill O'Reilly or Ted Nugent. It is dangerous to expose their feeble leftist minds to satire, since they cannot tell the difference between Tina Fey and Sarah Palin.

Ben Shapiro worries because Colbert's anti-conservative exaggerations make it "nearly impossible to watch an episode of The Colbert Report without coming away with a viscerally negative response to conservatives." Leaving aside the fact that we could say the same of any given 30 minutes of Fox News, we think we can think of another reason Shapiro finds Colbert so vile, and maybe something to worry about. In his testimony to Congress about the day he spent working alongside migrant farmworkers, Colbert explained, out of character, why he chose that particular issue to highlight:

I like talking about people who don’t have any power, and it seems like one of the least powerful people in the United States are migrant workers who come in and do our work, but don’t have any rights as a result. And yet, we still ask them to come here, and at the same time, ask them to leave. And that’s an interesting contradiction to me, and um… You know, “whatsoever you did for the least of my brothers,” and these seemed like the least of my brothers, right now. A lot of people are “least brothers” right now, with the economy so hard, and I don’t want to take anyone’s hardship away from them or diminish it or anything like that. But migrant workers suffer, and have no rights.

And there's a taste of Stephen Colbert when he's not pretending to be a despicable conservative. It's not something Colbert is likely to launch into on The Late Show, to be sure. But we can sort of see why Ben Shapiro might have a problem with the real Stephen Colbert, too.

Follow Doktor Zoom on Twitter. He wishes Ben Shapiro would stop portraying his "Ben Shapiro" character, a whiny, self-important asshole who never shuts up about how oppressed the rich and powerful are. It's vile, and makes conservatives look like jerks.