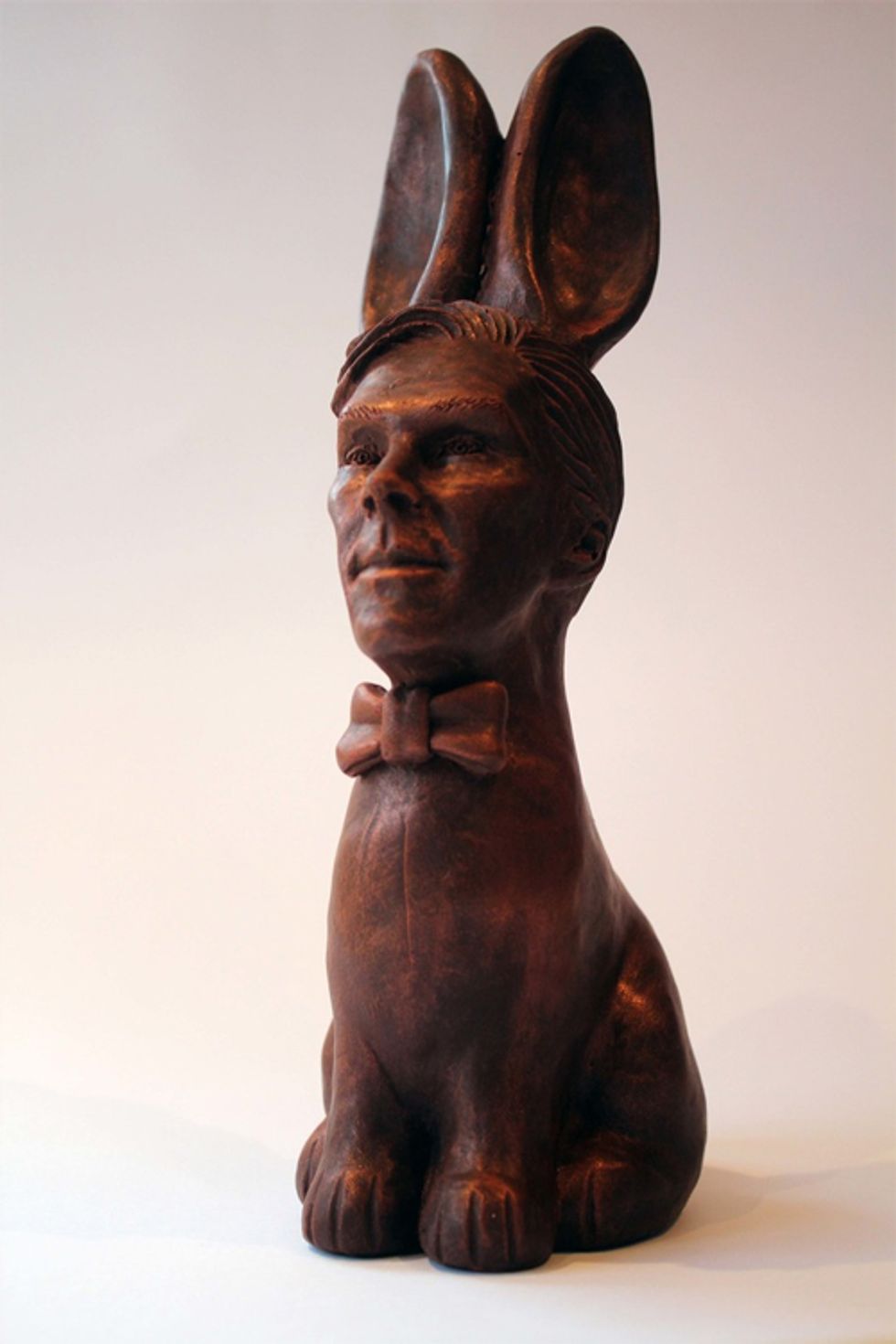 Are you blinded by its majesty?

Yr Wonkette is busy working on an exciting new project, we said teasingly, so today's Saturday Nerdout must of necessity be brief. Oh, but do we ever have some beautiful strangeness for you people today!

The Benedict Cumberbunny Has Arrived. Now Surrender Your Soul

From the deranged or brilliant mind of UK food arteest Jen Lindsey-Clark, we bring you the Cumberbunny, a ridiculous chocolate bunny with the face -- unlicensed, we assume -- of Sherlock star Benedict Cumberbatch. Don't ask why. Don't give too much thought to the sheer stupidity of a £50 (roughly $70) Easter bunny in a world where children are going hungry, for that is not the point of Art. Instead, accept it as far less horrifying than the existence of a $1,000 sundae and prepare for the Revolution anyway. The Cumberbunny is a thing, so you may as well wonder at the existence of a confection described by its maker as "a delicious Belgian chocolate rabbit with a handsome face and a tasty bottom."

It comes in three flavors from UK chocolate shop Chocolatician: dark chocolate with a dusting of edible bronzelike "lustre," milk chocolate, and the "limited edition white chocolate ones come with a edible 22 carat gold bow-tie" -- OK, that one really does trigger our Liberal Gilt. As you gaze at the Cumberbunny, does it not gaze back at you?

This is Chocolatician's second Cumberbatch batch of chocolate art-things; last year, The Guardian tells us, they were responsible for "Chocobatch," a " life sized chocolate figure of the actor made from nearly 500 bars of Belgian milk chocolate:

We're honestly not sure whether this is art, fandom taken to an absurd degree, or perhaps a form of stalking that happens to involve chocolate. With the current crop of Cumberbunnies, Ms. Lindsey-Clark is at least showing some restraint; she told a British paper, "I'm planning to send one over to his mum but not him," Lindsey-Clark told Metro UK. "He might think it's weird eating his own face."

Yes. We can see how that might be awkward.

Also, sad news for American choco-connoisseurs who might be tempted, from the order page: "So sorry but cannot take anymore orders from the U.S. at the moment as trying to work out shipping issues. Stay posted on that one."

We've noticed that this Colin Pinkham kid gets completely insane traffic with his tales of terrible restaurant behavior, so we figure You People might also enjoy similar stories from a bookseller, only instead of writing about people who think sashimi would taste a lot better cooked, the proprietor of the Book Mine in Fair Oaks, California, keeps a log of dumb things he overhears or gets asked in his rare and antique bookstore. Consider the following:

Actually, we really identify with that last one. It probably describes about 80% of people who do end up working at bookstores, don't you think?

The Ethics (If Any) Of Torturing Robots

[contextly_sidebar id="0TFPPZFnZuvpxjH8depP0h5Oit5rj77f"]Last week, we featured a video of Boston Dynamics' Atlas Robot demonstrating its ability to recover from being pushed, knocked over, and having its objective (a box to pick up) being moved away by a guy holding a hockey stick. As BoingBoing's Mark Frauenfelder points out, the video messes with our logic and empathy: no matter how much we know the thing's a machine, it looks marginally human, and so we end up feeling sorry for it, even as it demonstrates how impressively capable it is. You'd never trip a toddler (if you would, please delete your account), but you gotta trip some robots, in order to build better robots. All this is by way of sending you off to read this pretty cool essay, "Is it OK to Torture a Robot?" by Dylan Love, which gets straight to the Atlas video conundrum:

Consider the latest robot to be unveiled by Google’s Boston Dynamics. When the collective internet saw a bearded scientist abuse the robot with a hockey stick, weird pangs of empathy went out everywhere. Why do we feel so bad when we watch the robot fall down, we wonder? There’s no soul or force of life to empathize with, and yet: This robot is just trying to lift a box, why does that guy have to bully it?

We took this question to a more satisfying conclusion for our present day: Is it okay to torture a robot?

“When A.I. reaches some certain level,” says comedian and podcaster Duncan Trussell, “when it passes the Turing test and becomes indistinguishable from human intelligence, then at that point the machines will deserve the same protections offered to humans by the legal system.”

And what about video games? What do we do, asks Trussell, when the inhabitants of Grand Theft Auto 15 have some kind of self-awareness and insist that they be protected from "bored 15-year-olds mowing them down in the streets?”

As a gamer who felt terrible enough going all the way to the Dark Side while playing Star Wars: Knights of the Old Republic -- to do this (SPOILER WARNING), you not only kill major characters who've been helping you all along, you also order one loveable character to kill another -- Yr Dok Zoom has to admit that this essay seriously messed with our head.

Here, Spend Some Time On Another Planet

We can't really top i09's description of this animated film by Chloe Hayward, "Vessels -- 4AM," so we won't bother trying:

[It's] like being on a tourist spaceship touring a volatile world. And, as it navigates water, ice, and lava, to music, it’s somehow perfectly lovely.

Those kids and their computer animations are doing some pretty incredible stuff. Remember when we were impressed and moved (and frankly, still are) by a computer-animated lamp playing with a ball?

Programming Note: Yes, we'll run an open thread for today's elections so you can all talk about Louisiana and those weird caucus states. Polls close at 9 Eastern (8 Central if you're voting in Louisiana) so look for an open thread around 8-ish Eastern, OK?