Ben Carson Beated Up A Robber One Time, With His Brain 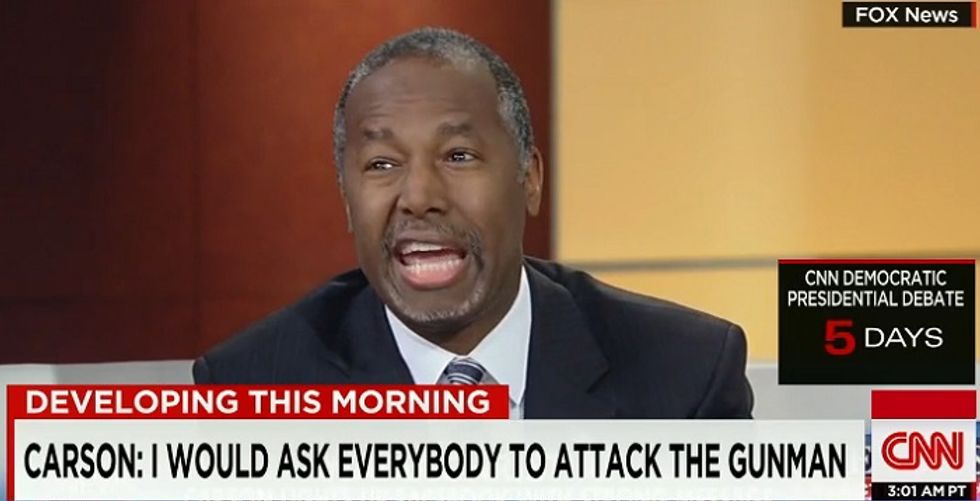 Ben Carson continues his hilarious winning strategy of telling America that the victims of last week's massacre were a bunch of pussies, because who in their right mind gets shot? That's so lame. He has either refused to consider that maybe shitting on victims of a massacre isn't a particularly smart strategy, or maybe he's decided that there are more rightwing morons who explain in internet comments how they'd take that shooter down than there are people who are appalled at his comments. He could be right about that, even. But in a Wednesday radio interview, he told a significantly different story about this one time when somebody pointed a gun at him:

"I have had a gun held on me when I was in a Popeye's organization" in Baltimore, the retired neurosurgeon told Karen Hunter on Sirius XM Radio, referring to the fried chicken fast-food chain.

"Guy comes in, put the gun in my ribs. And I just said, 'I believe that you want the guy behind the counter.'"

First off, leaving aside the dumb gun story for the moment, "a Popeye's organization"? Are they a subsidiary of the Tamaribuchi Heavy Manufacturing Concern? Meh, organization, establishment, whatever. But that's a pretty impressive contrast to what he told Fox News he'd say if confronted by a hypothetical mass shooter:

[Not] only would I probably not cooperate with him, I would not just stand there and let him shoot me. I would say, "Hey, guys, everybody attack him. He may shoot me, but he can’t get us all.”

Hmm... maybe the difference is that the gunman in the Popeye's was only intent on armed robbery, not murder, so Brave Sir Benjamin was perfectly willing to cooperate in that case -- it's certainly the Christian thing to do, like when Jesus said, "But I say unto you, That ye resist not evil: but whosoever shall smite thee on thy right cheek, turn to him and say, 'I think you meant to hit that other dude.'" If nothing else, we certainly learned that Ben Carson is an unfailingly polite fellow, pointing the robber to the correct victim.

Also on Wednesday, Carson told CBS This Morning host Norah O'Donnell that he hadn't heard of Chris Mintz, the student and military veteran who actually did rush the shooter at Umpqua Community College, although he was shot seven times, and, like a total loser, didn't succeed in taking down the gunman. Not that Mintz's heroism means Carson was wrong when he suggested that the victims were cowards or anything:

"That verifies what I'm saying," he went on to say. "That's exactly what should be done. And if everybody does that, the likelihood of him being able to kill as many people diminishes quite significantly."

Also, too, Carson explained that he has absolutely no interest in criticisms that he was insensitive toward those dead wusses in Oregon, complaining that we live in

"a culture now where people decide that everything you say, we need to set up battle lines and we need to get on this side of it or that side of it, rather than collectively trying to figure out how we can solve the problem."

"It's sort of an immature attitude, but it seems to be something that's rampant in America today," he added.

Honestly, can't a man suggest a completely practical solution to mass shootings without being called insensitive? You know who the real victim of all this finger-pointing is? Ben Carson. Don't cross him, or he'll take you down.

Unless of course there's someone else nearby he can suggest you should attack instead.