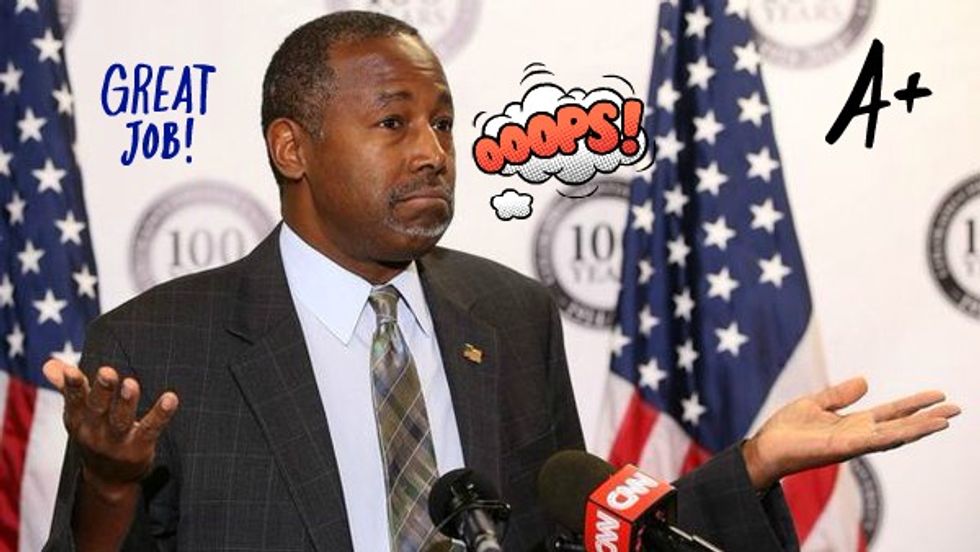 can you feel the trumpmentum?

Ever since he endorsed Donald Trump a few weeks ago, Ben Carson has been drifting aimlessly across the land stumping for his former rival. Well, "stumping" is probably too strong a word. Lurching? Sleepwalking? Tiptoeing? Probably that one, because his endorsement of Trump is, shall we say, less than ringing.

“He has some major defects, there’s no question about it — just like the rest of us,” said the retired neurosurgeon, who endorsed Trump last month, during the radio program “The Cats Roundtable” on Sunday. He didn’t detail what he thought the defects were.

Did you want to get the Full Carson and endure something called a "Cats Roundtable" hosted by stupidly rich supermarket person John Catsimatidis? You can listen to the whole show here if you dig New York accents and hearing Neil Diamond's 'America' as bumper music, if bumper music were played on a tinny speaker you first threw down a well.

We should probably listen further, because we're sure that Carson totally recovers from this blunder and offers an unqualified endorsement of everything Trump. Oh wait.

“Everybody believes that we are weak, we are weak on the world stage, we’re not doing things that make sense economically,” Carson explained to host John Catsimatidis. “Right now what we need is somebody who can help restore the confidence of the American people.”

So is Trump that person?

“He’s probably the person,” Carson said. “Are there better people? Probably. But one of the things we have to do is we have broaden our pool from which we select our leaders.”

Well, electing the human version of a can of one of those off-brand Red Bull-type sodas that are really! aggressive! about! everything! is indeed one way to broaden our leadership pool. Too bad that experiment comes with the possible destruction of the free world rather than just some 2 a.m. teeth grinding and a sugar overload.

Now, to be fair, Trump did compare Carson to a child molester and denounced Carson's entire weird religion, but those things don't seem to bother Carson all that much. Especially the child molester thing, we guess?

“He said that it was political,” Carson said of Trump’s child molester remark. “He was concerned about the fact that he couldn’t shake me. I understand politics, and particularly the politics of personal destruction, and you have to admit to some degree that it did work. A lot of people believed him.”

“It’s not really about me,” Carson continued. “If it were about me, yes, I would be outraged. I would say in no way can I support this, but it’s not about me. It’s about America.” Carson continued, “Unfortunately we live in a society where that kind of thing works, and people use things that work.”

So Trump compared Old Sleepin' Ben to a child molester, but that's America's fault. Got it. If America weren't just asking for it, Donald Trump would not have to impute crimes of moral turpitude to shambling zombie person Ben Carson. And let's not even get into the fact that there was literally no point during this election where Donald Trump lived in fear of Ben Carson's success. Hell, Ben Carson didn't live in fear of Ben Carson's success this election cycle.

If this were anyone but Ben Carson, we'd assume this tepid endorsement was actually payback for all the shit he had to eat during the campaign, but we really don't think Ben is that self-aware. Or awake, for that matter. We're sure he'll continue to bring his trademark blend of utter lack of enthusiasm and deep confusion to the rest of the campaign season until this is all mercifully over and he can begin low-key grifting again. Hang tough, Sleepy Ben.