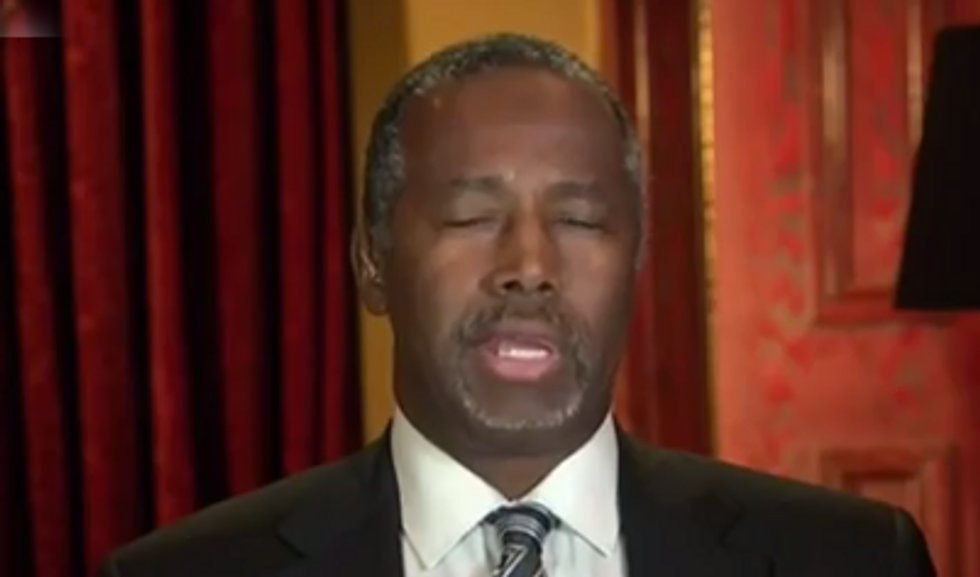 World-renowned neurosurgeon Ben Carson is still hitting the anaesthetics and rewriting history, and hoo boy, his latest installment is a real gas.

On Sunday, Carson tried to explain to George Stephanopoulos comments he made during a Republican debate about how he would have smoked out Osama bin Laden after George Bush kept us safe on 9/11, without the hassle of a 14-years-and-counting war in Afghanistan.

Here's what Carson said during the debate:

Declare that within five to 10 years, we will become petroleum independent. The moderate Arab states would have been so concerned about that, they would have turned over Osama bin Laden and anybody else you wanted on a silver platter within two weeks.

And here's Stephanopoulos asking him what even the eff he's talking about and how even the double-eff he thinks that would have worked:

STEPHANOPOULOS: But how would that have worked?

How would you have gotten the moderate Arab governments to turn over Osama bin Laden in two weeks?

He'd already been expelled by Saudi Arabia. He was already an enemy of those moderate governments.

CARSON: Well, I think they would have been extremely concerned if we had declared -- and we were serious about it -- that we were going to become petroleum independent, because it would have had a major impact on their finances.

And I think that probably would have trumped any loyalty that they had to -- to people like Osama bin Laden.

So, in Carson's alternate universe, instead of fighting back against the bad guys with terrorist training camps and boxcutters -- like the Jews shoulda done to prevent their own Holocausting, and like every mass shooting victim in America should do, instead of cooperating with their own murder -- President Bush should have used that bullhorn to demand the head of Osama bin Saddam Stalin Hussein Obama or else, in 10 years, WATCH OUT!

And this would have worked, obviously, because Saudi Arabia knows we're not really addicted to its sweet, sweet oil and we can stop any time we want to, by trading in our SUVs for hybrids and bike-pooling to work and installing solar panels on our buildings. Not that Carson suggests we ought to have done any of those things. Or that we ought to do them now.

We assume Carson believes, as all Republicans do, that continuing our oil addiction is fine, so long as we're using our own supply. Or maybe not even that. Maybe simply threatening "Energy independence!" would have done the trick.

Or, another possibility from Carson: If Bill Clinton hadn't been such a pussy and had killed bin Laden dead when he supposedly had the chance (like how President Obama did, for reals, in this universe), that might have worked too. So you could technically blame Clinton for 9/11. But not George Bush. Definitely not George Bush.

CARSON: Well, I was primarily talking about Iraq.

In the current race for saying the dumbest shit possible about 9/11, it's possible Carson's a mere runner-up, what with baby brother Jeb! still desperately insisting 9/11 didn't even happen, THANKS GEORGE!

But Carson's latest stream of nonsense talk does add more credence to our working theory:

It seems unpossible that this is the same Dr. Ben Carson who once strutted into operating rooms and confidently announced that he was going to slice into brains and do fancy surgery to them, and no one told him to please put down the scalpel and step away from the brains.

At some point -- like when he was the director of pediatric neurosurgery at Johns Hopkins -- he must have given a damn fine impression of an intelligent and competent human person, instead of the fumbling dumbfuck he is now, easily befuddled by political systems that are not like how we do in America, and also whether he is talking about Iraq or Afghanistan or that time he told a gunmen in a Popeye's "organization" to please go shoot the kid behind the register instead.

The only plausible explanation is that the formerly great and brilliant neurosurgeon broke his brain somehow. And, darn the luck, retired neurosurgeon Dr. Ben Carson just might have been the only one good enough to fix it. Too bad he's busy running for president instead. Oh well.