Ben Carson Is A Brain Surgeon, So He Knows A Psychopath (Obama) When He Sees One (Obama) 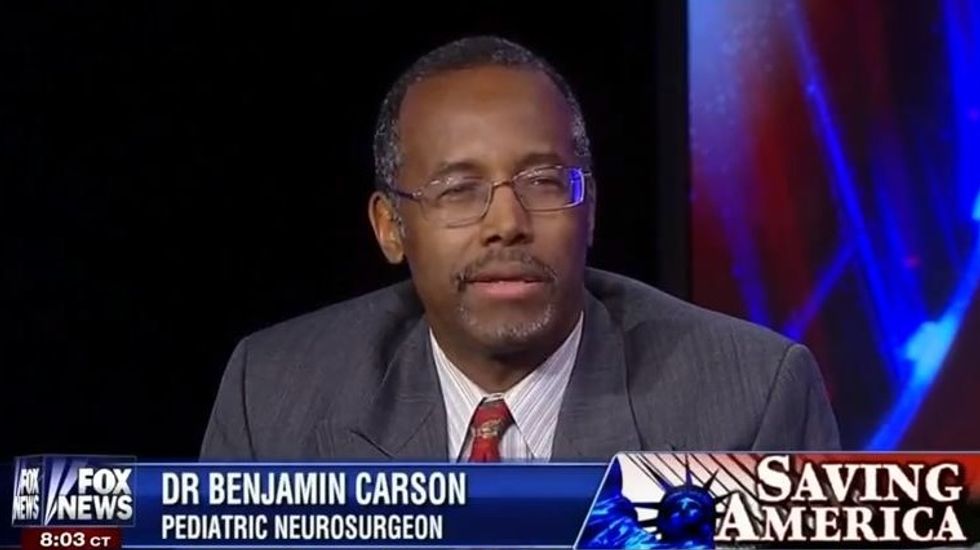 So the big "get" in GQ's profile of Dr. Ben Carson is that, while watching Barack Obama's State of the Union address this year with his pal/adviser/consigliere/media handler Armstrong Williams, this happened:

As the two men turned to the TV, they began dissecting Obama's performance.

"Like most psychopaths," Carson grumbled. "That's why they're successful. That's the way they look. They all look great." [...]

"He faces the same challenges you will face," Williams said of Obama as he spoke. "He's gotta convince people to believe him. That's all he's doing: selling his narrative."

"But he knows he's telling a lie!" Carson vented. "He's trying to sell what he thinks is not true! He's sitting there saying, 'These Americans are so stupid I can tell them anything.'"

That there is pretty much a perfect Ben Carson story. The neurosurgeon who sounds so reasonable when he says that of course vaccines save lives and all parents should get their kids vaccinated, but also seems to be auditioning to replace Keith Ablow, Fox News's favorite psychiatrist, the minute the topic strays away from medicine. It's great hyperbole, will play great with conservative readers (who are filling rightyblog comment sections with "Carson nails it yet again" this morning), and is also not something a Serious Candidate says about the person whose job he thinks he's qualified for. And no, don't expect Ben Carson to take it back, because he knows he's right, and that the liberal media just twists his words to make him look like a crazy goofball.

Oh but there's so much other good stuff in the GQ piece, too. Like Ben Carson's visit to Israel, which reporter Jason Zengerle went along for. There's this scene with a young Israeli woman who got the thankless job of briefing Carson on How Israel Works. Carson asks her, "In the United States, we have Republicans, Democrats, and independents. What do you have?"

The woman answered Carson's question about political parties, telling him that there were Labor and Likud and a host of other factions in the Knesset. "And what is the role of the Knesset?" he interjected. This prompted a tutorial on Israel's legislature. Carson is a tall, dignified-looking man with a placid, almost sleepy face. As he tried to concentrate on his Hebrew Schoolhouse Rock primer, he seemed even more fatigued. "It sounds complex," he finally said. "Why don't they just adopt the system we have?"

Yes, kids, Ben Carson appears to be unfamiliar with the basics of a parliamentary system, and if it's so complex and confusing for an actual brain surgeon, the most obvious solution is to do things the American Way. Sadly, Zengerle doesn't seem to have asked Carson if he thought that Israel's national health insurance system is the worst thing since slavery; we bet Carson would have some thoughts on that, too.

And then there's the bit where an IDF lieutenant colonel is assigned to walk Carson around a tourist spot in the Golan Heights and teach him about Israel's strategic situation. The colonel is explaining his views on the Syrian civil war, over thataway in the distance:

He claimed that most of the Islamist fighters weren't Syrian but came from Morocco and Europe. "It's just like the troublemakers in Ferguson," Carson said, betraying a habit of wedging the unfamiliar into a context he understands.

Not that the GQ piece is all hits on Carson being a boob who's completely out of his depth -- though those are the fun parts, yes. Zengerle looks at Carson's up-from-poverty backstory, and his genuine brilliance as a neurosurgeon as well. Thing Yr Wonkette didn't know, for instance: In 1987 Carson performed the first successful operations to separate conjoined twins who were joined at the head; both babies survived. And Zengerle gives due attention to the prominence of Carson's success story in the African-American community, where for years he was held up as an inspiring example of a poor kid from Detroit who made good:

"I can't even count how many times I saw Ben Carson when I was a kid," the writer Ta-Nehisi Coates, who grew up in inner-city Baltimore in the '80s and '90s, told me. "Any time anyone wanted to bring out any sort of inspirational figure for young black kids, especially young black boys, in Baltimore, you turned to Ben Carson."

Of course, with his newfound embrace of rightwing wackaloonery, Carson seems determined to throw a lot of that cultural cachet out the window -- thanks to a teensy little character flaw that's probably the best observation in the GQ profile:

Carson is rarely shy telling others that they're foolish. With both the stereotypical arrogance of a surgeon and the understandable brio of a self-made man, Carson seems to harbor an unshakable belief that he knows more than most anyone else.

And so when he's reminded that most African-Americans don't agree with his politics -- if polling can be trusted, which it can't, because pollsters are full of liberal bias -- Carson knows for a fact that black people have just been lied to by Democrats and the media:

[Carson's rightwing stances] are painful for African-Americans like Ta-Nehisi Coates, one of America's most celebrated writers on race, who credits Carson with providing an example to young blacks. "I'll always be in debt to him for what he did, but in terms of who he is now, I don't quite understand that," Coates says. "It seems like Barack Obama is the exact sort of person he'd have wanted us to grow up to be." When I mentioned Coates's criticism to Carson, he betrayed no discomfort. "It doesn't surprise me," he said, "because people grow up and they listen to propaganda."

Ben Carson isn't ever wrong. The world is wrong, and Ben Carson will do head surgery on it to make it work right. Not as president, of course -- once he loses enough primaries, he'll graduate to the ranks of Fox News experts and other players on the rightwing media circuit. And he'll continue to wonder why everybody else on the planet is so stubbornly stupid about reality.

[GQ via The Hill]