Ben Carson Is Idiot All Over His Own Confirmation Hearings 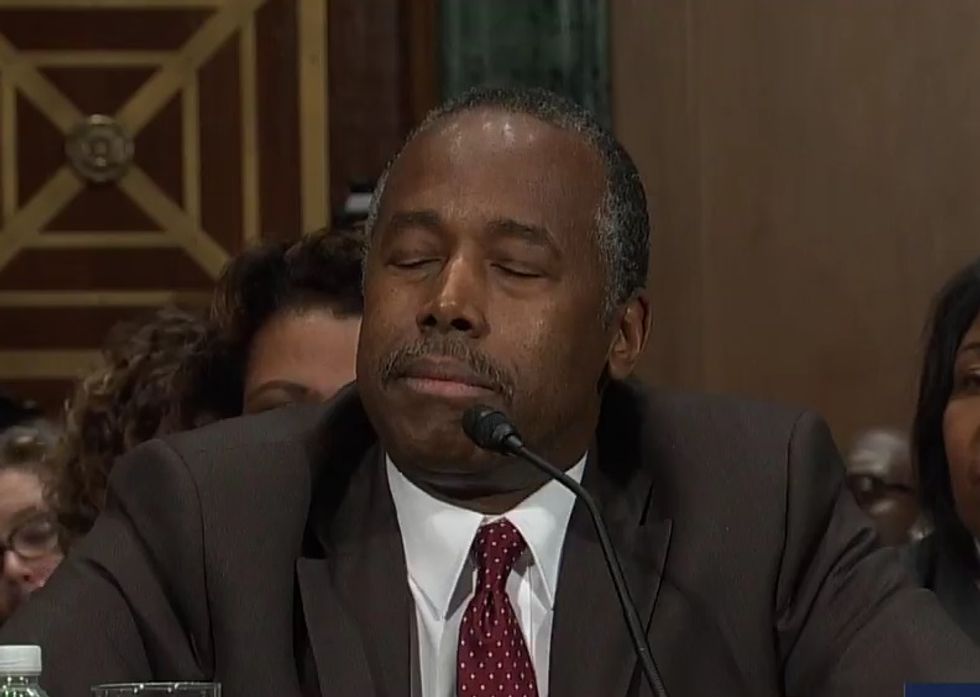 Really, this time he was only blinking

Oh, Ben Carson. You just can't help yourself, can you? Things come out of your mouth all funny, and everyone knows what you meant, but the way you said it will inevitably stick with you, won't it? Well don't you worry, Dr. Carson! You just rest assured that while Yr Wonkette is required to make fun of the dumb-sounding thing you said, we know what you were shooting for, and then we'll move on to making fun of you on far more important matters of substance, OK?

So what happened? In confirmation hearings for Carson's nomination to head the Department of Housing and Urban Development, Elizabeth Warren asked him whether, as HUD secretary, he could guarantee that no HUD money would ever go to benefit Donald Trump, and then Carson got tongue-tied, made a little slip of infelicitous phrasing, and in the process landed himself in the Foot In Mouth Hall Of Fame:

.@SenWarren asks Dr. Ben Carson: "Can you just assure us that not one dollar will go to benefit either the President-elect or his family?" pic.twitter.com/lSyur2AYik

Warren: Can you just assure us that not one dollar will go to benefit either the President-elect or his family?

Carson: It will not be my intention to do anything to benefit any American.

Now, obviously, Carson meant he wouldn't ever try to benefit one person over another, and followed his slip with, "in particular...It is for all Americans what we do.” But by then it was too late, and Carson was being quoted all over Twitter because there's no two ways around it, that's a beautifully inept way of trying to say you'd show no favor.

While we're at it, we're going to run the risk of angering the Liberal Establishment and assess Sen. Warren, whom we love dearly, a five-yard penalty for Unnecessary Grandstanding. Yes, of course conflicts of interest from Donald Trump's businesses are a huge issue and a valid concern, but it was a hell of a stretch to bring the matter up at Sleepy Ben Carson's confirmation hearing. If there's one part of the real estate market that's safe from Donald Trump's predations, it's Section 8 housing, so the question sounded out of place and impolitic. There are better questions to hit Ben Carson on, anyway, like his only qualification for HUD being that he wants to cut all the government programs, everywhere.

It's too bad Carson's gaffelet will probably get most of the attention, since there's so much more wrong with him as the head of Housing and Urban Development than some clumsy phrasing. Instead of talking about policies in his opening statement, Carson instead trotted out his standard biography, hitting all the up-from-poverty and self-reliance talking points about how his mom had only a third-grade education but made him read a lot, all the usual bootstraps bull that's made him popular with the right, but very little about why he should be running a government agency with a $47 billion budget. Maybe because he studied hard after a good lecture.

Some of his answers were infuriatingly simplistic, like this exchange with Republican Sen. Thom Tillis (NC):

Tillis: What's the best thing we can do for someone on public assistance?

Carson: Get them off of it.

Well, sure, that's great. And how? Just tell 'em to find a job, or take away benefits, or perhaps yell at them that the free ride's over? Possibly preach a little prosperity gospel at them? Carson didn't have much to say about the disabled and elderly people who rely on public housing, since apparently he couldn't think of any incentive programs to reverse aging or make disabilities vanish. Maybe the private sector could help with that.

Sherrod Brown, the ranking Democrat on the committee, used his opening statement to question Carson's ideological commitment to "helping" the poor by eliminating government support -- if there's nothing to be dependent on, then we've solved dependency:

Dr. Carson has suggested that all assistance programs should be cut by 10 percent a year until the budget is balanced -- without exception and without regard to whether the population served is vulnerable. Even social insurance programs like Social Security, Medicaid and Medicare, which he believes are 'socialist-leaning,' should be subject to cuts.

Over 5 million Americans look to HUD for help, and we're reaching only one out of four eligible families. Many end up on years-long waiting lists for lack of funding. A 10 percent cut would send hundreds of thousands of families into a tailspin, and for some might literally be a matter of life and death.

Yes, we can see why Carson might seem a problematic candidate for the position, all right. As for his innovative plan to eliminate poverty by reducing benefits budgets, Carson corrected Sen. Brown and said that he'd later revised his ideal figure to cuts of 1 percent a year, so there's that. Carson also acknowledged that "safety nets are important," and said taking away housing aid and safety net programs would be "cruel and unusual" -- make what you will of his use of a term applied to the penal system to refer to people getting government assistance.

Still, Carson managed not to say anything overwhelmingly awful about poor people, or suggest they be converted to Soylent Green, so he'll probably get confirmed anyway.