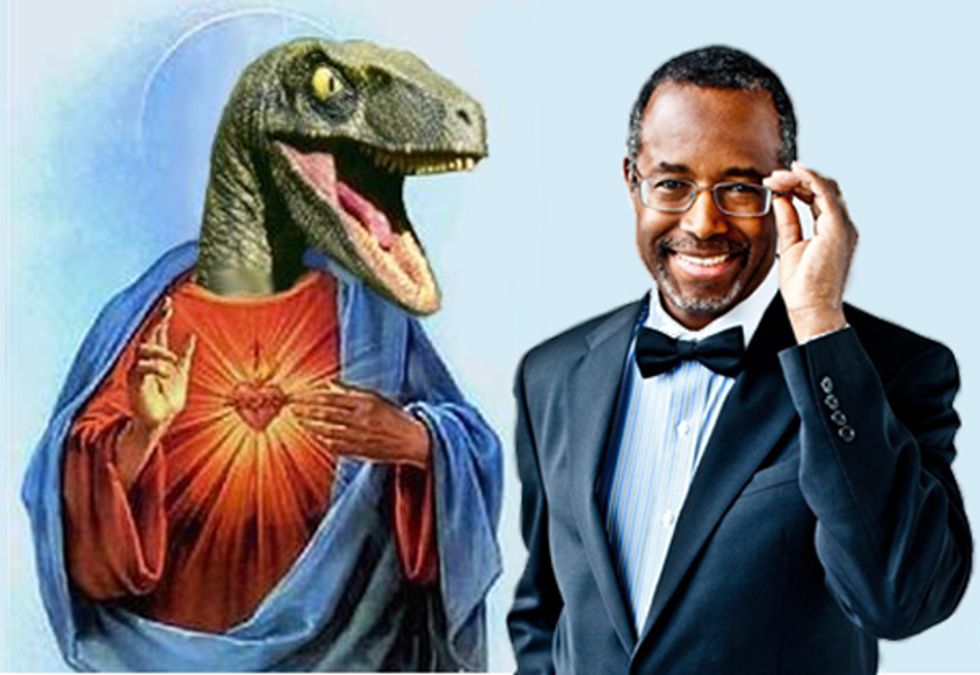 The Liberal Media tried to Gotcha! Conservahero Ben Carson again this weekend, and once more he escaped the Logic Snares set for him by secularist tricksters. He is not going to fall for your little traps, LIEberals! On NBC's Meet the Press Sunday, Chuck Todd asked Carson how "science and religion, in your mind, coexist" -- an obvious attempt to try to get him to talk about Evolution, which as any good Christian knows is poppycock.

Now, Ben Carson was not going to fall into that trap. He wasn't going to dodge the question by claiming not to be a scientist, nor would he punt the question away or even try for a two-point conversion.

OK, we like that, so far. We don't especially believe that he means it, but who knows, maybe he's not all that interested in putting up a copy of the Ten Commandments on every street corner and returning Bible readings to public schools (in which case, forget winning the South Carolina primary). Of course, it's also easier to integrate your faith with science when you decide that some science isn't really science at all:

I find a very good measure of correlation between my religious beliefs and my scientific beliefs. People say, "How can you be a scientist, how can you be a surgeon if you don’t believe in certain things?” Maybe those things aren’t scientific. Maybe it’s just propaganda.

Carson didn't specify what particular bits of science he considers to be "propaganda," although he has in the past said that he doesn't hold with that nonsense about Global Warming or evolution. On the latter bit of propaganda, Carson has previously dismissed evolution as a myth, explaining that in his scientific opinion, "no one has the knowledge" to determine the age of the Earth, because “carbon dating and all of these things really don’t mean anything to a God who has the ability to create anything at any point in time.” Also, too, he happens to know, as an actual brain surgeon, that the “complexity of the human brain” is not something that could have just happened at random: “Somebody says that came from a slime pit full of promiscuous biochemicals? I don’t think so.” See, that's how science works. You look at a proposition, and if it doesn't seem likely to you, you reject it. Duh. You liberals need to go read up on the scientific method, OK?

Carson is also quite certain that eyeballs disprove evolution, because they just do. No way could eyes have just happened, because all the parts of the eyeball just have to have been there all at once -- it's completely impossible for any of those structures to evolved (needless to say, Carson's wrong).

Give me a break. According to their scheme, boom!, it had to occur over night, it had to be there. I instead say, if you have an intelligent creator, what he does is give his creatures the ability to adapt to the environment so he doesn’t have to start over every fifty years creating all over again. And that's why you see the changes that occur within species, with environment and with time.

Now, that last bit may sound like he accepts evolution, but note the creationist keywords: "changes that occur within species." That's the old "microevolution" dodge, where creationists say, sure, robins may change over time, but they remain robins. You'll never see a robin become a crocodile, so haha, Darwin lied. Also, no, no evolutionary biologist claims that the eye evolved "overnight" -- it took a lot of serious overtime by the devil to bury the evidence to test our faith.

So there you have it, from an actual brain surgeon: Evolution is just plain impossible, because the brain is really complex and has a whole bunch of gooey stuff in it that could never have come from slime. Not that he's going to let that influence policy or anything when he (*snicker*) becomes president.