Ben Carson The Trump Supporter Hates Donald Trump So Much, You Guys 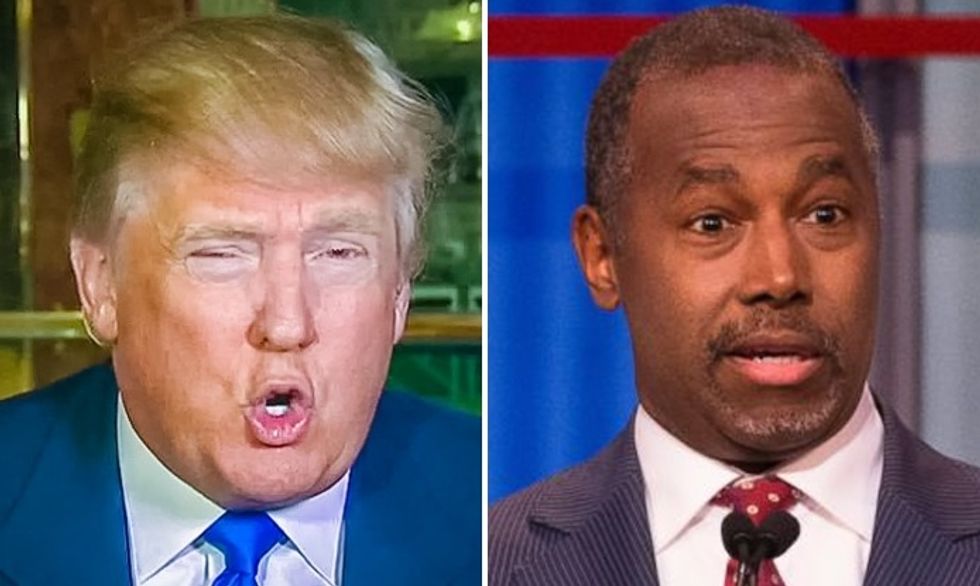 [wonkbar]<a href="http://wonkette.com/595704/ben-carson-insists-he-really-was-a-teen-thug-stabs-cnn-reporter-to-prove-it"></a>[/wonkbar]Um, Ben Carson is almost as bad at supporting people for president as he is at running for president. We did not actually know that was possible, considering how he is a brain surgeon who got confused by pyramids and how the Israeli government works and also doesn't even seem to remember whether or not he was a common criminal as a child. Oh, and he fell asleep during debates A LOT.

Here is an interview with Carson on the radio show Kelley & Kafer. It is really, really special:

Why are you jumping up and down and blowing goats in excitement over Donald Trump, Dr. Carson?

It was pragmatism, recognizing that John Kasich cannot win without a brokered convention, which would guarantee a Democrat win. And recognizing that Ted Cruz can bring conservatives, but will have a very difficult time bringing moderates and Democrats. And I think that will be pretty much a guaranteed loss also. So in terms of who can potentially win, that would be Donald Trump. And when I look at the consequences of not winning, it's too horrible to think about.

WHOOOOOOOO! Somebody tell Carson to stop giving Trump tongue-baths on the radio like that!

Kafer adds, "To consciously vote for a man I know is a bad man ... a liar and a fraud, I could never cast that vote." Ben Carson tries to convince her otherwise:

For me, it's about the children and the grandchildren. If it were just me, I would be completely where Krista is. I would say, "Hey, I got this, I can deal with it." But for them, I can't.

OH, so he actually hates Donald Trump and finds him terrifying as everybody else does, but he hates Hillary more. Ben Carson, you are very bad at this.

I would not support anybody who was running a third party.

Man, feel the #TrumpMentum coming out of Ben Carson's mouth!

But don't worry, #JesusWillFixIt. God is going to save America, Carson says, EVEN with Donald Trump in office, because "You wouldn't have chosen Nebuchadnezzar or the Pharaoh" as your leader either, as they were just awful. But God used them to do some #GodPlans and everything was fine, so if it happened in Bible it can happen in America we guess.

[wonkbar]<a href="http://wonkette.com/599694/ben-carson-having-sleepy-orgasms-about-future-one-term-president-donald-trump"></a>[/wonkbar]We can add this interview to all Carson's other resounding endorsements of Trump, like when he said Trump has "major defects" and that there are probably "better people" out there to be president. Or when he said of his endorsement, "Is there another scenario that I would have preferred? Yes — but that scenario isn’t available."

[wonkbar]<a href="http://wonkette.com/600447/ben-carson-arent-we-all-criminals-just-a-little-bit"></a>[/wonkbar]Oh and lest we forget, he said we shouldn't demonize Trump campaign manager Corey Lewandowski for allegedly assaulting ladies, because we've all caught a criminal charge for SOMETHING, right? No?

We need to end this post, as Carson's enthusiasm has overwhelmed us and we need our nap.