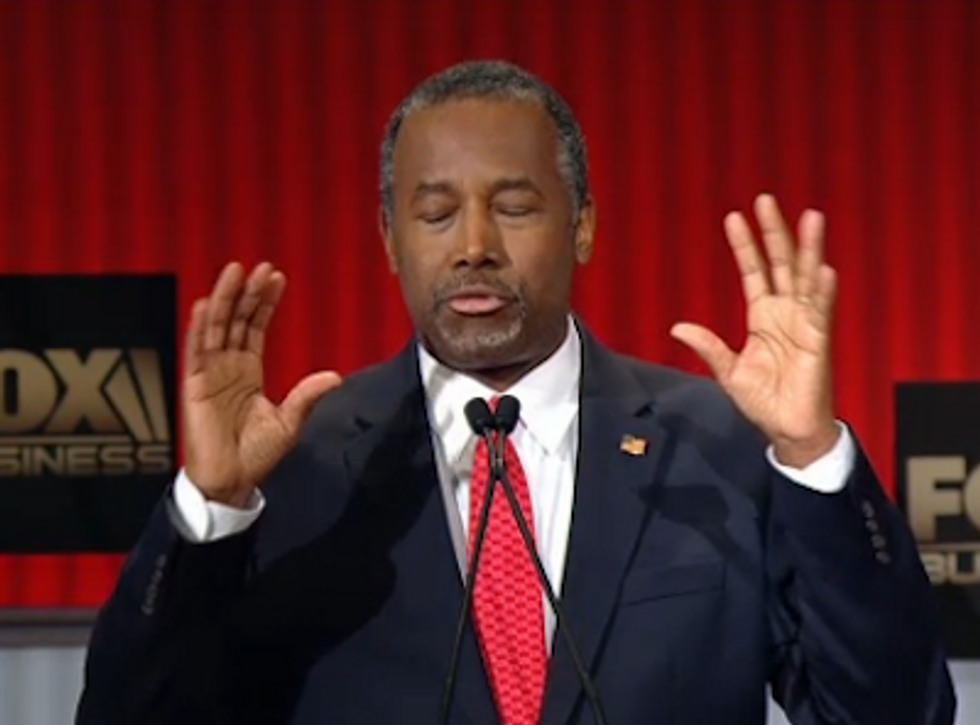 It felt so real!

Rejoice, fellow Americans, for Ben Carson is awake and alive and still running for president, apparently! And he has heard the tragic news of the untimely demise (OR WAS IT MURDER?!) of Supreme Court Justice Antonin Scalia. Does he have thoughts? Sort of, yes!

For one thing, he knows his fellow Republicans would not be demanding the so-called "president" wait to appoint Scalia's replacement until another president can do it instead if the current "president" were, say, not President Blackman BAMZ! O'Libtard. But! BUT! Republicans do have a fair point in their completely unprecedented preemptive obstructionism, sayeth Carson:

Recognize that the two picks that the president has selected are ideologues. So there's really no reason to believe that his next pick wouldn't be an ideologue also.

[contextly_sidebar id="vyBfsCGRsfqhymhuF5FphG8fEsaYKtQW"]Certainly citizens of all political stripes can agree that Antonin Scalia, known as the fairest-minded neutral umpire swing vote jurist in American history, should not be replaced by an ideologue, which we assume is Carsonian for "girl judge." Unless that ideologue is the reanimated corpse of Antonin Scalia, obviously.

However, Scalia has raised some very important issues, by dying:

You know, it kind of highlights one of the problems that we have, and that is that the Supreme Court has become a political tool. That wasn't the intention originally, when things were put together.

When things (like the judicial branch) were put together (in the Constitution), author Thomas Jefferson never intended for the Supreme Court to be packed with lady-chicks of the vaginal persuasion. Nor was the Court ever intended to be used for political purposes, such as, to name a completely random example, whining in a dissent about the inevitable destruction of America if we allow grown-ass adults to consensually fuck each other in their buttholes. Furthermore:

And I think we need to relook at the whole Supreme Court issue, because it has become completely different than was intended. And we need to be looking at term limits for Supreme Court justices, when we enacted that program the average age of death was 47.

Nailed it, Dr. Carson! That's the real problem, right there. When we enacted the program of the American United States of Us, we did not have neurosurgeons like Ben Carson defying the will of God to keep court justices like Scalia alive a lot longer than was necessary. Scalia ought to have died decades ago, as our founders would have wanted.

Thus, it is appropriate and necessary that we relook at the Constitution -- an act that would definitely NOT cause Scalia to drag his zombie self out of his own grave to protest such jiggery pokery -- to remedy the problem of Scalia living for too many years.

Rest assured, citizens, when Ben Carson is president, he will find a way to fix the whole program that was put together, so that Justice Scalia is never allowed to die (OR BE MURDERED!) at the superfluous ripe old age of 79 ever again.