Ben Carson Will Not Have You Slurring The GOP As Anti- Science, Sir 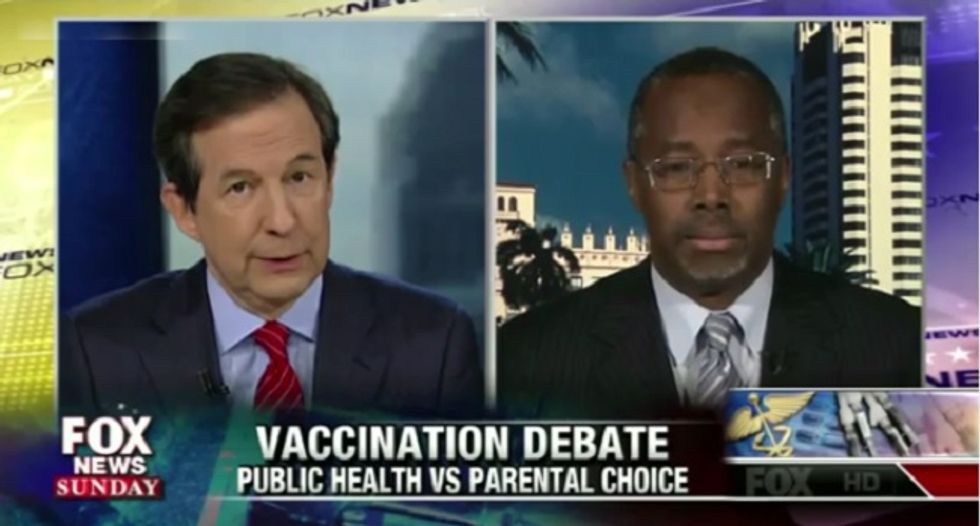 For all of his entertaining lunacy on everything else, Ben Carson has mostly been one of the most reasonable Republican voices in the most recent weirdness over childhood vaccines. It's almost as if he knows a whole lot about doctoring and jack shit about everything else. For instance, he quite sanely said, yes, every child should be immunized -- and then, the moment the conversation turned beyond actual medicine, he added that maybe it was undocumented immigrants spreading the disease around because Obama won't control the border.

So we shouldn't be too surprised to find the same pattern repeated this weekend on Fox News Sunday: sane on medical matters, delusional elsewhere. It's probably host Chris Wallace's fault, for setting up a question that included matters other than vaccines:

Wallace: You are talking about this in a very clinical scientific way, as a noted brain surgeon would.Some Democrats, though, say there’s some elements in Republican Party, both candidates and voters, who deny science, whether it is vaccinations, or climate change, or evolution. Do you think that criticism is fair?

Carson: No, it’s not fair at all because it’s not a partisan issue. You look in California, the places where outbreaks have occurred are largely blue areas, Democratic areas where people have said you know, they don’t need them anymore. The reason they think they don’t need them anymore is because we've had such an effective vaccination program that you’re not seeing diseases. But now that you’re getting large pockets of people who are not vaccinated, the opportunity exists to reintroduce the disease. It’s not a Democrat or Republican issue at all. A lot of people want to make it a partisan issue.

It was awfully nice of Wallace to remind us that Carson is a brain surgeon, which means he's a genius at everything, and would never dabble in pseudoscience or quackery.

And Carson is only partly right about where the outbreaks are. Yes, California is a blue state, but the anti-vaccination crowd has spread from crunchy-granola we-hate-big-pharma types to include libertarians who refuse to vaccinate because it's a Big Government mandate, and as Rand Paul reminded us last week, Only Parents Own Their Children. Still, Carson's at least half-right: The anti-vaxxer crowd is definitely nonpartisan. For now, although a new poll shows that's changing because we have to politicize everything. And of course, of the elected officials claiming that vaccines should be voluntary, not mandatory, for Freedom, virtually all have had an R after their names, a fact Carson conveniently misses.

As for science in general, Ben Carson is the wrong guy to ask about what counts as science, because he is Out Of His Element, Donny. As the nice folks at Crooks & Liars note, Carson isn't too sure about this whole "climate change" thing, because while 97 percent of climate scientists say it's human-caused, a lot of engineers in the oil and gas industry are skeptical, and they are scientists too, just like Ben Carson!

Pressed on the fact that the bulk of the scientific community believes the Earth is indeed warming, Carson pivoted. "You can ask it several different ways, but my answer is going to be the same," he said. "We may be warming. We may be cooling."

Who knows, really? The important thing is that we not get caught up in endless arguments but to find solutions that protect the environment and American jobs, like the Keystone XL pipeline.

Carson is also, no surprise, a creationist. In 2012, over 500 professors and students at Emory University petitioned to protest Carson's his invitation to speak at commencement, since as a 7th Day Adventist, Carson believes in the literal interpretation of the book of Genesis. He once told a convention of science teachers, “Evolution and creationism both require faith. It’s just a matter of where you choose to place that faith.”

Carson also is big on the idea people who accept evolution as science are, of course, morally challenged:

In an article in the Adventist Review, Carson was quoted as saying, “By believing we are the product of random acts, we eliminate morality and the basis of ethical behavior.”

“For if there is no such thing as moral authority, you can do anything you want,” Carson was quoted as saying in the Review. “You make everything relative, and there’s no reason for any of our higher values.

Carson later clarified in an interview with Inside Higher Ed that he'd been misleadingly quoted, and didn't mean to suggest that those wacky folks who accept evolution are evil -- just that their sense of morality doesn't come straight from God:

Either way, science remains a matter of faith for Carson. And because he loves to provide material for study by the National Institutes of Irony, Carson also said in a November speech to evangelical conservatives in Iowa that the really cool thing about science is that it's all about data:

"The wonderful thing about medicine, when you show data, it changes people's minds," he said. "That doesn't happen in politics."

If only that were true when it came to things like climate science and the fossil record!