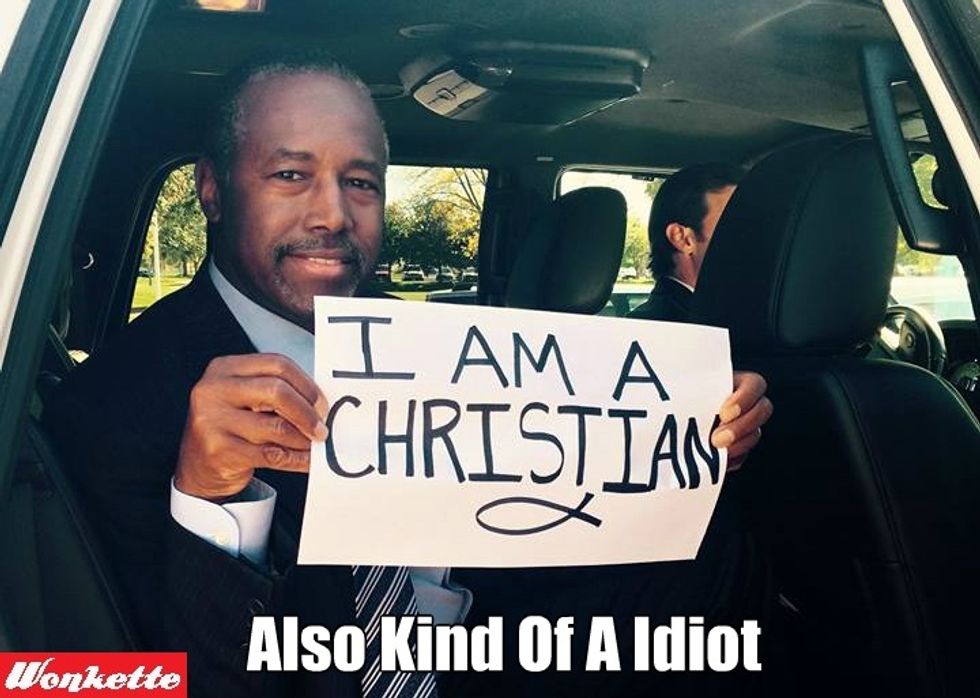 And did we mention A Moran, also too?

Dr. Ben Carson has been sharing a lot of thoughts about the massacre in Oregon, and for a fellow who sort of faded into the background of the first two Republican debates, something about the murders in Roseburg has turned the man into a veritable Fountain of Derp. On Fox and Friends Tuesday, Carson made it clear that he was disgusted that Barack Obama would politicize the tragedy, and then non-politically explained that we need guns to prevent tyranny, and if he were president, he'd be so busy that he wouldn't go to Roseburg, but he "would go to the next one." And while he was at it, he added that the victims at Umpqua Community College really let him down by being so wimpy and not rushing the guy with the semi-automatic rifle and the three or more pistols. It was a pretty impressive amount of Pure Stupid for a four-minute interview:

Carson was astonished that anyone would want to take our guns away, because as everyone knows, gun laws never reduce gun deaths. Except when they do. In any case, we need to figure out who's dangerous and control them, because "Daniel Webster said that America would never suffer tyranny because the people are armed." We suppose he's thinking of this quote by Noah Webster, who was a whole different guy, and who was also arguing against a standing army, one of which we have now, so it's far too late. But perhaps we quibble.

Fox then played a clip of Roseburg newspaper publisher David Jaques's assertion that the people of Roseburg absolutely do not want Barack Obama coming there. (Presumably, he's talked to all of them.) Brian Kilmeade wanted to know whether Carson, when he's president (HA!), would ever go somewhere he's clearly unwelcome (according to one guy).

“Probably not,” Carson replied. “I mean, I would probably have so many things on my agenda that I'd go to the next one.”

And that, dear Wonkers, is leadership: Sorry, kind of busy, I'll hit you up next time there's a massacre, m'kay?

The conversation then turned to a Facebook photo Carson had posted affirming that he is a Christian, and is therefore at high risk of being murdered in a mass shooting. After expressing sympathy for the victims' families, he explained what the sign was all about:

I believe that this nation has Judeo-Christian roots. And why are we so busy trying to give those away for the sake of political correctness? You know, when you give away your identity, you give away your soul. And in the Book of Proverbs it says, "Without a vision, the people perish." We can't give away who we are and what we stand for and what our vision is.

Perhaps noticing that this little speech had fuck-all to do with the events in Roseburg, Kilmeade brought the conversation back to the report that the Oregon shooter singled out Christians for murder, asking him what he'd do "if a gunman walks up and points a gun at you and says 'what religion are you?' That is the ultimate test of your faith."

Carson had a ready answer: Like Christ said, he'd kick some ass, unlike those wimps in Roseburg:

I'm glad you asked that question, because not only would I probably not cooperate with him, I would not just stand there and let him shoot me. I would say, 'Hey, guys, everybody attack him. He may shoot me, but he can’t get us all.'"

Those stupid people, just letting themselves be shot like that. Including Chris Mintz, the student who let himself be shot seven times while rushing the shooter. Why did Mintz wimp out and fall from his injuries before stopping the bad guy? Mintz survived, but he's got to be pretty ashamed of his failure when compared to the heroism of Hypothetical Ben Carson.

No wonder Dr. Ben Carson wouldn't go to their crappy memorial service, even if his schedule wasn't full.

Also, too, beyond the idiocy of the Fox interview, Carson had some deep thoughts on Facebook about what he had learned as a surgeon, patching up the bodies of gunshot victims at Johns Hopkins Medical Center in Baltimore:

That's pretty impressive thinking. Sure, he saw his share of dead bodies full of bullet holes, but never saw a single one that was more upsetting than the possibility that someone might lose their ability to put those bullet holes into more bodies. Wonketteer Jesse Berney had a pretty apt reply:

How about 20 bodies, Dr. Carson? Twenty children's bodies not worth, say, a restriction on magazine capacity so that a killer might have to stop and reload, giving bystanders a chance to rush him? Or how about 559 children under the age of 11 killed by guns so far this year? Is that enough small bullet-riddled bodies to maybe require licensing and training of all gun owners? Or perhaps liability insurance?

Nah, of course not. Gotta prevent tyranny. And since we're so committed to the fantasy of shooting down a tyrannical government with our unrestricted guns, there will ALWAYS be a next massacre for Dr. Carson to attend the memorial for. Pick any week in your calendar, you sociopath.