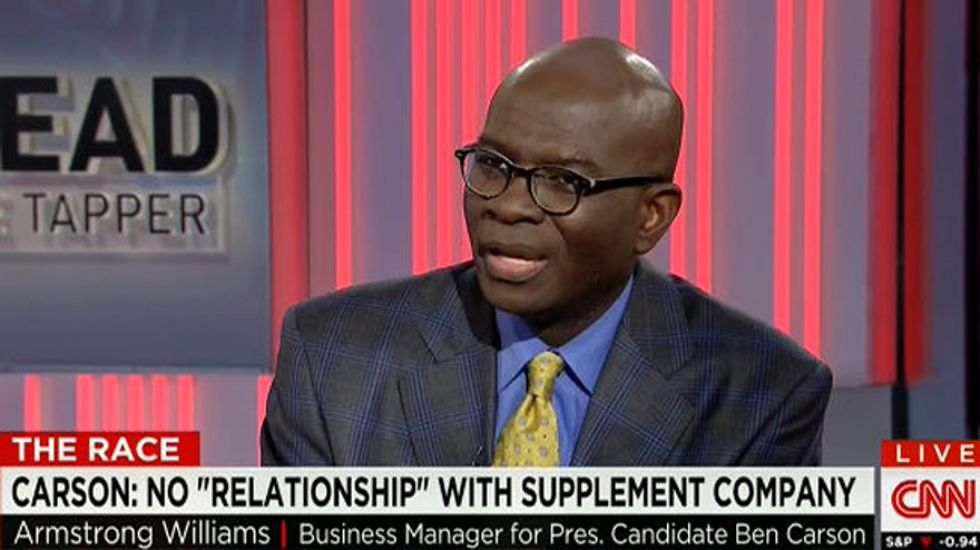 Armstrong Williams, Ben Carson's business manager and constant Sven Jolly figure who always seemed to be lurking in the background or correcting the candidate's little gaffes, has been sued by a former aide who says Williams sexually harassed him and then arranged to have him fired when he spurned Williams's gross unwanted overtures. WaPo's Erik Wemple has the details:

Charlton Woodyard, in a complaint lodged in D.C. federal court, seeks unspecified damages from Williams for seeking to “control Mr. Woodyard financially, professionally, and emotionally.” The end result of this effort, notes the suit, was that Williams “abused his power to attempt to exploit [Woodyard] sexually.” The sequence of events outlined in the complaint starts in the spring of 2013, when Woodyard was 26 and working at Union Station’s Jos. A. Bank.

Williams struck up a conversation with the sales associate and invited him early the next morning to his office, where they worked together for the whole day. Williams is a Sirius XM radio host and owner of seven television stations across the country.

Delighted to have found what seemed like a mentor who'd help him become a power player in his own right, Woodyard says he was "enticed" by Williams to quit his job at the suit store (Wemple makes a point of calling attention to the chain's reputation for "selling much-derided discount suits" which seems pointlessly mean until you click the linkie). And then the story gets weird, with a whole lot of twisty-turny allegations of a series of favors and skeeviness: Williams set up a private meeting for Woodyard with Clarence Thomas, paid for some of Woodyard's day to day expenses and offered him career advice, but never actually put Woodyard on his payroll. And then the skeevy stuff: Williams allegedly

The lawsuit doesn't say whether Williams also asked Woodyard if he liked gladiator movies or had ever been in a Turkish prison.

Williams helped Woodyard get a job in 2003 at the Washington Times -- Williams knows a thing or two about propaganda -- after which Woodyard claims Williams started getting all jealous of Woodyard's budding career as a rightwing hack in his own right. It sounds like an all-male wingnut version of A Star Is Born, only with slightly less Barbra Streisand. Woodyard alleges he had to stand by while Williams called Woodyard's boss at the Times, John Solomon, to tell him that “Mr. Woodyard was not effective in his work at the Washington Times and had been given too much leeway in setting his work schedule.” The message was clear to Woodyard: Williams made him, and could break him if Woodyard started getting too independent.

Woodyard was eventually downsized from the Washington Times in 2014, though not due to Williams's influence, and while waiting to get work at a proposed digital offshoot to be called "Washington Times Live," was once again relying on the kindness of the strange Mr. Williams. And so we get some nice juicy politics talk, too! Williams took Woodyard along to the 2015 White House Correspondents’ Association Dinner, and let him sit in on campaign planning discussions with Ben Carson:

“Mr. Williams confided in Mr. Woodyard about his concerns with Dr. Carson’s candidacy, including calling Dr. Carson ‘slow’ and ‘naïve’ and stating that he believed Dr. Carson lacked business savvy,” reads the complaint. Williams has served as Carson’s “business manager” and was widely quoted during the campaign.

And while having to have conversations with Ben Carson was undoubtedly traumatizing enough, Williams also allegedly did gross sex harassment to Woodyard, according to the lawsuit:

After Mr. Woodyard entered Mr. Williams’s bedroom to discuss business, Mr. Williams asked Mr. Woodyard: “why are you wearing so many layers?” When Mr. Woodyard responded that he was “freezing,” Mr. Williams replied that that he’s “got the heat” and that his “heat is better” than clothes for keeping him warm. Mr. Woodyard ignored the comment, as well as the grunting noises Mr. Williams was making, and instead tried to talk about ways in which Mr. Williams could support Washington Times Live.

At one point, Williams allegedly “grabbed Mr. Woodyard’s penis through his pants and said to him, “you got small feet, small hands… and an oversized weapon. How does that work? How is that possible?” Woodyard pushed away.

Eventually, Williams arranged for Woodyard to work with television stations owned by Williams, but it didn't go well, and Woodyard faced constant demotions and insulting behavior from his supervisors. He agreed to a termination agreement in May, but later tried to revoke it. So now Woodyard is suing Williams, alleging "sex-discrimination violations of the D.C. Human Rights Act as well as assault, battery and tortious interference with Woodyard’s arrangements with the Washington Times, among other counts."

Turns out this is the second sexual harassment suit against Williams, who was sued in 1997 by a former producer who alleged Williams had "repeatedly kissed and fondled him for almost two years.” Williams and the plaintiff settled that lawsuit.

In a New York Times interview, Williams rejected the allegations and said Woodyard was just out for money:

He said that Mr. Woodyard lived in his home temporarily, stayed out late partying, and was terminated from the job because of incompetence.

“This is someone that I cared about, we were tight, we were buddies, we hung out,” Mr. Williams said, suggesting that Mr. Woodyard was trying to extort money from him. “I’m single, I’m a bachelor, I’ve had these kinds of allegations before. He wants to get paid for doing nothing.”

Huh! Sounds like every boss in every sexual harassment case ever, with the exception of the long-term houseguest situation, which is definitely a unique variation on the usual (alleged) theme. Yr Wonkette is not a lawyer, but we're betting this one will eventually end in a settlement with a nondisclosure agreement and no admission of wrongdoing. As a former employee of Jos. A. Banks, Woodyard clearly knows a thing or two about getting decent money for hurriedly-assembled suits.