Ben Shapiro: The Moral Arc Of The Universe Bends Towards Ben Shapiro 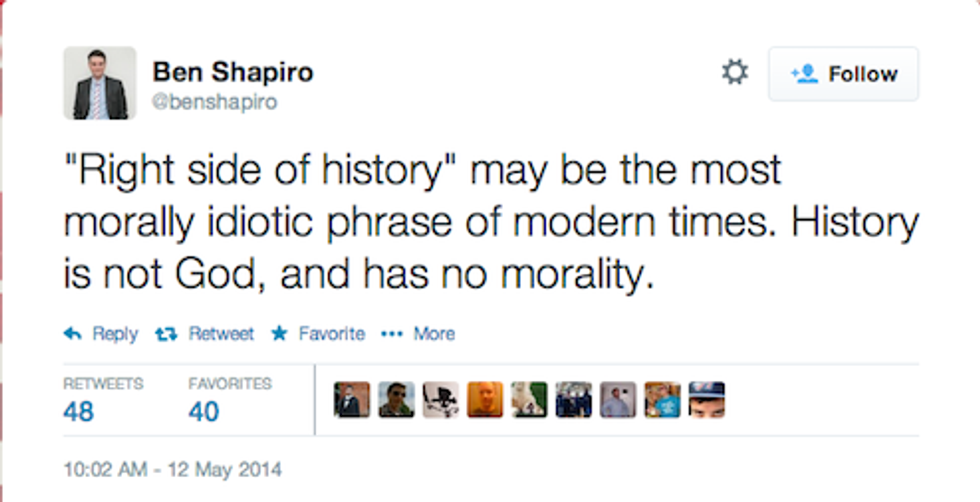 Whatcha doin'? Nothing much? Want to check out what baby-faced soon-to-be-unibrowed helium-voiced professional whine machine Ben Shapiro is up to? Of course you do! Today, Ben is very very sad that people keep using the phrase "the right side of history" because you keep using those words but Ben Shapiro does not think those words mean what you think they mean, because of God.

Take that, liberals, with your beliefs that things can change and evolve and the moral prohibition on mixing wool and linen in clothing is probably something that was a mere artifact of the times and is not meant to be a forevermore pronouncement from God, as opposed to God's telling us to go get some slaves, which obviously is just eternally good advice.

We think this is all related to Ben's deep sadness over the fact that a gay player is now allowed to exist in the NFL and that the NFL -- a private entity with a private contract with its players -- chose to fine a player for being a bigoted fuckwit, because that is what Ben's previous insightful tweet is about.

Ahh, yes. The Ben Shapiro battle cry: "Why won't my intolerance be tolerated? You gay people are the REAL bigots!" Depressingly Ben probably has another wingnut welfare book deal lined up just on the basis of that whine alone.

Mostly though, we're just curious -- and perplexed -- as to what Ben Shapiro believes is the one true Word of the eternal morality of God. Old Testament only, because he's Jewish? Hebrew version of the Old Testament only, or cool Protestant Reformation King James version? Do we have to pay attention to that whole Apocrypha thing that the papists love? What about one of those ridiculous "plain talk" Bibles that conservative evangelical Christians love because they make Jesus sound like Buddy Jesus, your best friend?

Perhaps Ben's next book will clear that all up for us in between yellcrying about how the gays are oppressing him so hard right now.