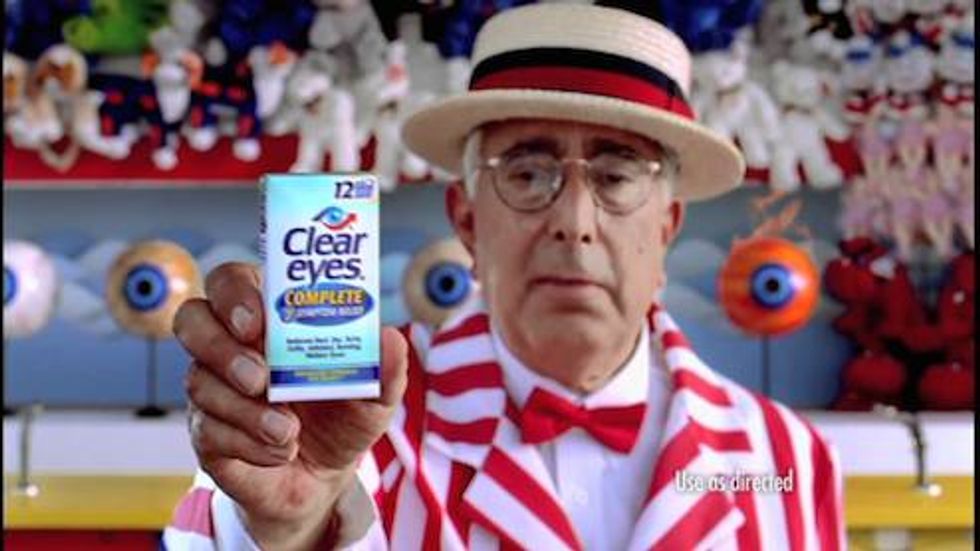 Great rightwing thinker Ben Stein -- who no doubt breathes a sigh of relief every time he remembers that Newt Gingrich got called "a dumb person's idea of a smart person" before that title could be bestowed on Ben Stein -- has a fresh new understanding of where all of America's problems with race come from: poor blacks, who were just on the verge of all becoming wealthy before they destroyed themselves with the drugs and the crime (and probably that hippity hop music), and then liberals enslaved them with government programs.

On Newsmax TV, Steve Malzberg asked Stein about a report that the mother of Michael Brown, the black teen shot and killed by a Ferguson, Mo. police officer, faces felony charges.

Stein said he hadn't seen the report, and instead started discussing his views on race.

"You would think, if you read the liberal mainstream media, that the main problem with race in America was poor innocent black people being set upon and mistreated by the police. That’s just nonsense," he said, according to video recorded by BuzzFeed.

"I mean, the real problem with race in America is a very, very beaten-down, pathetic, self-defeating black underclass that is -- uh, just can’t seem to get its way going in the way that blacks were able to before the scourge of drugs and the scourge of gangs," Stein continued.

Not only that, but did you see what huge dangerous weapons some of those big black bucks are, like that Michael Brown kid?

In any case, Stein continued, attempts to address poverty have only made it worse, because the only thing the government ever does right is building prisons, and Barack Obama refuses to tell His People to get their act together and stop being poor criminals:

I mean, it’s an amazing thing -- blacks were on their way in this country, even after the horrors of slavery, and then drugs came in, the destruction of families came in, and the crisis in the black community is just absolutely unbelievable. And that, it seems to me, is something that Mr. Obama could have addressed, and he just ignored it completely.

Gosh, Ben Stein, that is some pretty innovative thinking that is fresh and timely, if by "timely" you mean that it goes back some 50 years to a bastardized rightwing twist on points made in Daniel Patrick Moynihan's 1965 report on poverty and family dysfunction in black America. Except where Moynihan saw those socioeconomic problems as having their origins in slavery and Jim Crow, every rightwinger who's mentioned "the underclass" since 1965 has turned it into a shortcut for "shiftless blacks who don't take responsibility for themselves" and has also turned around and blamed anti-poverty programs for perpetuating poverty. And where Moynihan called for jobs programs and investment to fight those problems, every rightwing genius from Pat Buchanan to George Will to Ben Goddamned Never Had An Original Idea In His Life Stein has said that if only The Blacks would stop being so lazy, find some character, get off drugs, get married, and get to work, poverty would disappear. So congratulations to Ben Stein for his latest contribution to an already towering mountain of bullshit.

If all this sounds a bit deja-vooey, it may be because Stein and idiots like him say shit like this every five minutes (no doubt because of the lack of a strong black feminist role model in their lives) and also because just last week Stein proclaimed Barack Obama the "most racist president there has ever been in America," a generalization made all the more remarkable when you consider that eight of those presidents owned slaves while serving as president (another four owned slaves at other points in their lives). Then again, maybe they weren't especially racist in the way they owned those slaves; you'd have to ask Ben Stein, Certified Racial Genius.