BERNIE AND HILLARY AGREE LOUDLY AT EACH OTHER FOR TWO SHOUTY HOURS! 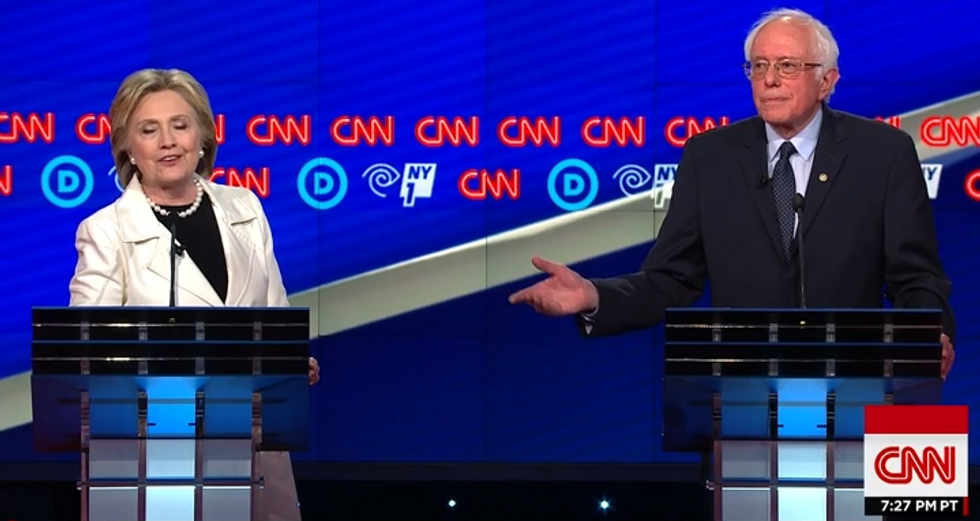 Oh goodness and BREAKING NEWS and whoop-de-doo, there was another Democratic debate Thursday night. It was riveting. (LIES!) No for real it was great. (YOU'VE GOT TO BE SHITTING ME.) Well they yelled at each other a lot, at least!

Here are some of the things we remember:

Such New York, MANY values!

Know how over on the GOP side, Ted Cruz sneered and scoffed and subtly accused Donald Trump of being a gay terrorist over his New York Values? Which some kind of read as a sort of "Jew York Values" dogwhistle? Yes well Bernie and Hillary are both SPREADIN' THE NEWS about New York Values.

For one thing they were IN New York, so obviously. For another, Hillary was the Senator from New York, and Bernie is from Brooklyn, so even more DUH. Hillary actually kept saying the words, about how they used their "New York Values" after 9/11 (she is the lady Giuliani of 9/11) and how they will take their "New York Values" to the White House, and so on, whereas Bernie said he "grew up in Brooklyn, New York, the son of an immigrant who came to this country from Poland at the age of 17 without a nickel in his pocket."

No, this is not the 2008 election or Suze Orman financial advice hour!

But they DID have an argumentative happychat about how Hillary needs to release the transcripts of all the sexxx speeches she made to Goldman Sachs, and Bernie needs to come clean about how he doesn't report ANY of the lucky pennies he finds on his taxes. We will tell you more about that fight later today!

SO MUCH SHOUTING, NOT MUCH LAUGHTER.

Hillary and Bernie yelled at each other, like so many times. Poor CNN moderators Dana Bash and Wolf Blitzer were just sitting over there like "Can I? May I?" and the only time the candidates stopped doing Interrupting Cow to EACH OTHER was when they would lock arms and do it AT THE ANCHORS IN UNISON.

We didn't hear too much of what they were saying during those times, because of how they were not taking turns.

What did they actually talk about? Did they do that thing where they yelled at each other even though they were agreeing on things?

Oh, they talked about a lot of things, like healthcare and whether Benjamin Netanyahu sux (Bernie: YES! Hillary: YES! But she is friends with him on Snapchat). And YES they did that thing where they yelled their agreement at each other, most memorably to our ears on the subject of Social Security. It was like:

BERNIE: I want to raise the Social Security income cap, unlike that asshole Hillary!

HILLARY: Yeah, THAT ASSHOLE HILLARY! I too want to raise the income cap!

Oh fuck it fine, here's an actual sample of that transcript that we didn't just make up. Would you raise the cap, Hillary?

CLINTON: I have said repeatedly, Wolf, I am going to make the wealthy pay into Social Security to extend the Social Security Trust Fund. That is one way. If that is the way that we pursue, I will follow that. [...]

SANDERS: Can I answer...

CLINTON: I did answer the...

CLINTON: -- into my mouth and say something...

SANDERS: Essentially what you described is my legislation, which includes ...

What's another thing where they yelled at each other even though they BASICALLY AGREED?

How about minimum wage? That was a good one!

BLITZER: -- if a Democratic Congress put a $15 minimum wage bill on your desk, would you sign it?

CLINTON: Well, of course I would. I have supported the fight for 15. I am proud to have the endorsement of most of the unions that have led the fight for 15. I was proud to stand on the stage with Governor Cuomo, with SEIU and others who have been leading this battle and I will work as hard as I can to raise the minimum wage. I always have. I supported that when I was in the Senate. But what I have also said is that we've got to be smart about it, just the way Governor Cuomo was here in New York. If you look at it, we moved more quickly to $15 in New York City, more deliberately toward $12, $12.50 upstate then to $15. That is exactly my position. It's a model for the nation and that's what I will do as president.

SANDERS: I am sure a lot of people are very surprised to learn that you supported raising the minimum wage to 15 bucks an hour.

ZING! And they yelled and yelled and blah blah-ed and neener neenered over who supported a higher minimum wage first, and who copied whom.

Our Wonkette Insta-Fact-Check from our liveblog showed that indeed Hillary Clinton DID endorse a $15 minimum wage A YEAR AGO. Did she copy Bernie? PROBABLY. But maybe not! The difference between these two on this issue is more in the style of how they'd get it done, as opposed to substance. Bernie wants a nationwide $15 minimum wage, period, full-stop. Hillary wants to start with $15 in big 'spensive cities and $12 in other areas, and work with poorer, smaller places to push them toward the goal of $15, eventually.

Because that's the big difference between these candidates! One has sweeping plans for revolution, the other advocates a more incremental approach. Which one you prefer is your business, we don't care what you do in your bedroom.

Other than that, did they fight over anything new and different besides how Hillary is a corporate shill warmonger murderer and Bernie loves guns so much he kisses them with his mouth, yadda yadda, break up the banks, yadda yadda, NICE TRY BERNIE, yadda yadda, PLAY AGAIN NEXT TIME, HILLARY, and so on?

What was a good moment where they agreed and did NOT eat each other's faces off, except for a little bit?

Ooh, it was when they talked about 'BORTION and a lady's right to choose:

CLINTON: And I want to say something about this since we're talking about the Supreme Court and what's at stake. We've had eight debates before, this is our ninth. We've not had one question about a woman's right to make her own decisions about reproductive health care, not one question.

And to be complete in my concern, Senator Sanders says with respect to Trump it was a distraction. I don't think it's a distraction. It goes to the heart of who we are as women, our rights, our autonomy, our ability to make our own decisions, and we need to be talking about that and defending Planned Parenthood from these outrageous attacks.

SANDERS: You're looking at a senator and former congressman who proudly has a 100 percent pro-choice voting record, who will take on those Republican governors who are trying to restrict a woman's right to choose, who will take on those governors right now who are discriminating outrageously against the LGBT community, who comes from a state which led the effort for gay marriage in this country, proudly so.

YAY, REPRODUCTIVE FREEDOM! And Hillary only called Bernie a dick ONE TIME in that exchange.

SO WHO WON THE DEBATE?

WE DUNNO! Or maybe we do but we are not saying! Or maybe different Wonkettes think different things about the candidates but we all love each other and it's FINE because both candidates are FINE.

But we do heartily agree with Hillary when she says that mofos need to get ready to unify behind WHOEVER the nominee is.

Also we do not need any more Democratic debates, sweet Jesus.