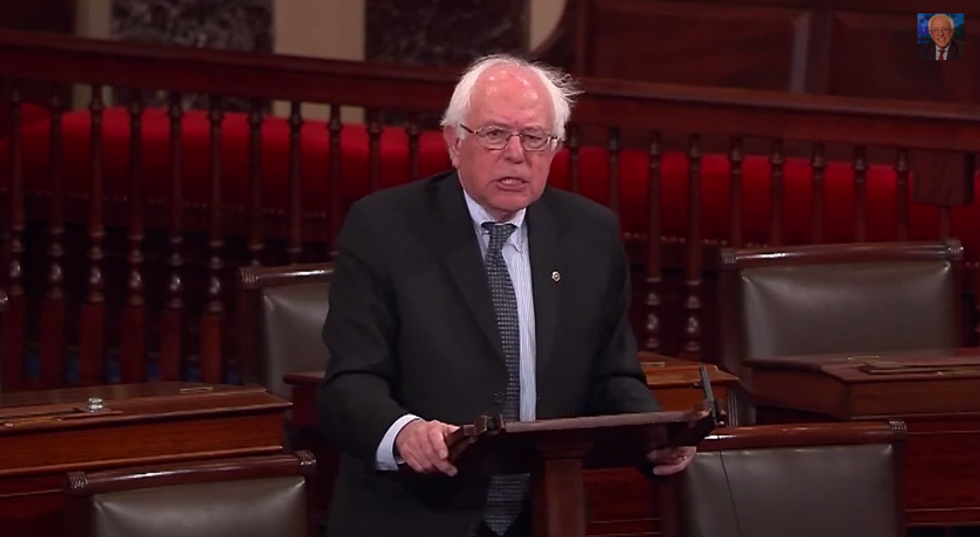 Bernie Sanders, our favorite socialist senator and only socialist senator but still our favorite anyway, has a terrific new economic plan to save America, and it's so crazy it just might work! Except, of course, that it will never work, because sadly, our Senate is filled with a whole bunch of senators who are not Bernie Sanders, and do not ask the kinds of questions he asks, such as, for example:

Hahahaha, that's an adorable rhetorical question to which we all know the real answer is, "How high would you like us to jump, Mr. Koch?" But Bernie Sanders is the honey badger of the Senate, and he will keep ranting against the billionaire class and the oligarchs, even if Elizabeth Warren is the only other senator cheering him on. (And you know she totally is.)

Pffft! Infrastructure. Living wages. Equal pay. Affordable education. These are the kinds of things we all know will actually destroy jobs and undermine democracy and blah blah blah ... whatever it is senators who are not Bernie Sanders tell themselves to justify not doing every single thing on his list, like, yesterday. It's not an unreasonable wish list -- unless you live in these U.S. States of America, where it's important to break up the unions but protect the too-big-to-fail banks because gosh, if we didn't do that, it would be so unfair to the billionaires who, coincidentally, have the money to buy and sell senators who will make sure their interests are protected. Coincidentally. Which is why the Bernie Sanders 12-point plan to burn it all down and eat the rich (remember, they taste like caviar), as effective as it might be, will never in a million trillion years happen.

Still, let's enjoy Bernie laying out everything that is wrong with everything and imagine, for just a moment, that there were more people like him in the Senate.