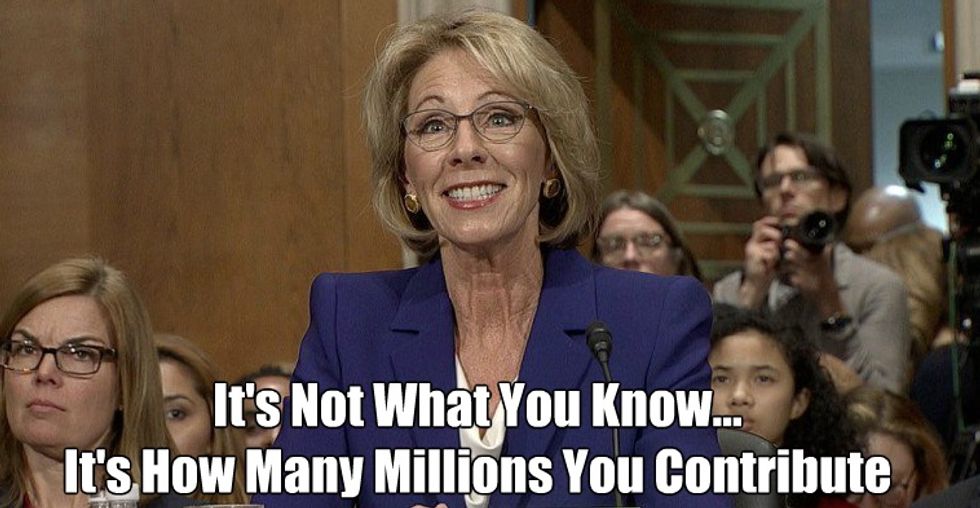 Here's another one for the "Gee, what could possibly go wrong?" files: The federal Department of Education is planning a big revamp of how student loans get repaid, and the centerpiece is that instead of contracting with nine different companies to manage repayment of student loans, there will instead be a single company with a monopoly on servicing all student loans. The idea is to regularize the experience of repaying student loans for all borrowers, so they're not faced with a lot of confusion as their student debt is bought and sold by different companies like subprime mortgages. Hurrah for simplifying the student loan servicing biz. The Obama administration had been looking at ways to make all that happen. Ah, but there's a catch:

[Critics] worry that consolidating so much market power in a single servicing company is risky, with echoes of the too-big-to-fail institutions that fueled the 2008 housing crisis.

“We’ve already seen a real lack of accountability among the servicers in helping people manage their repayments, which should be the real priority,” said Cody Hounainan, program director at Student Debt Crisis, a nonprofit advocate for borrowers. “Now that accountability issue is exploding because we’re taking away what little competition there was in this area.”

As it stands now, the nine companies currently servicing loans have been criticized for making it difficult for borrowers to find workable repayment plans, including the popular income-based repayment option. The Consumer Federation of America issued a report in March saying servicers contribute to increased default rates through poor service and information to consumers.

The Department of Education put out a call for bids from companies wanting to get the monopoly on the government's student loan servicing; the one clear benefit to borrowers would be that there'd be a single website to handle all repayments, instead of a bunch of different companies who may actually handle several different loans for the same borrower.

Unfortunately, while that would be a great idea, before the Education Department issued its call for bids, DeVos scrapped several proposals the Obama administration had put forward to push the mega-servicer (whatever it turns out to be) to improve consumer protections for borrowers:

She rescinded three memos that, among other things, called for the creation of financial incentives for targeted outreach to people at great risk of defaulting on their loans, a baseline level of service for all borrowers and a contract flexible enough to penalize servicers for poor service.

So the idea now seems to be a monopoly with few incentives to actually help borrowers. Whee! Acting undersecretary of education James Manning said this would still be fine, since the department can now "better monitor the performance of one servicer and one platform." As long as the servicer and platform don't suck, of course. He insisted the new contract would

ensure “superior customer service,” but he was short on details other than to say the reforms will streamline the payment process and borrowers’ interactions with the servicer.

Remember, this is the administration that promised its healthcare "reform" would guarantee insurance for everyone, with lower premiums and deductibles, and better coverage. And already, it looks like the Obama plan for better borrow protections has been tossed out:

A review of the amended contract solicitation shows the department plans to strip out mandates aimed at helping borrowers who fall behind on payments and people enrolled in income-driven plans. The servicer would no longer be required to have specialists on hand to aid people in delinquency, nor would the company have to remind borrowers to reenroll in income-driven repayment weeks before the deadline.

Huh! Sounds like a recipe for more defaults and late fees, with the added Republican finger-wagging of telling people who fall behind that it's THEIR responsibility to pay up on time (which is true -- but hey, let's remove any requirement to send a reminder, OK? Streamlining!) And the worst that could happen would be a surge in defaults, which could destabilize the financial system almost as much as the 2008 subprime crisis, considering that student debt has actually become a bigger share of household debt since the crash.

And then there are the companies that are in the running. Of the nine servicers currently out there, seven are nonprofits. But two, Navient (formerly Sallie Mae) and Nelnet, are public, for-profit companies. Wouldn't you know it, Navient is both a top contender for the contract, and is also facing a lawsuit by the U.S. Consumer Financial Protection Bureau for predatory lending practices. Heck, just award it to them already.

Yr Wonkette depends on your donations to keep us out of hock. Please click the "Donate" linky below!