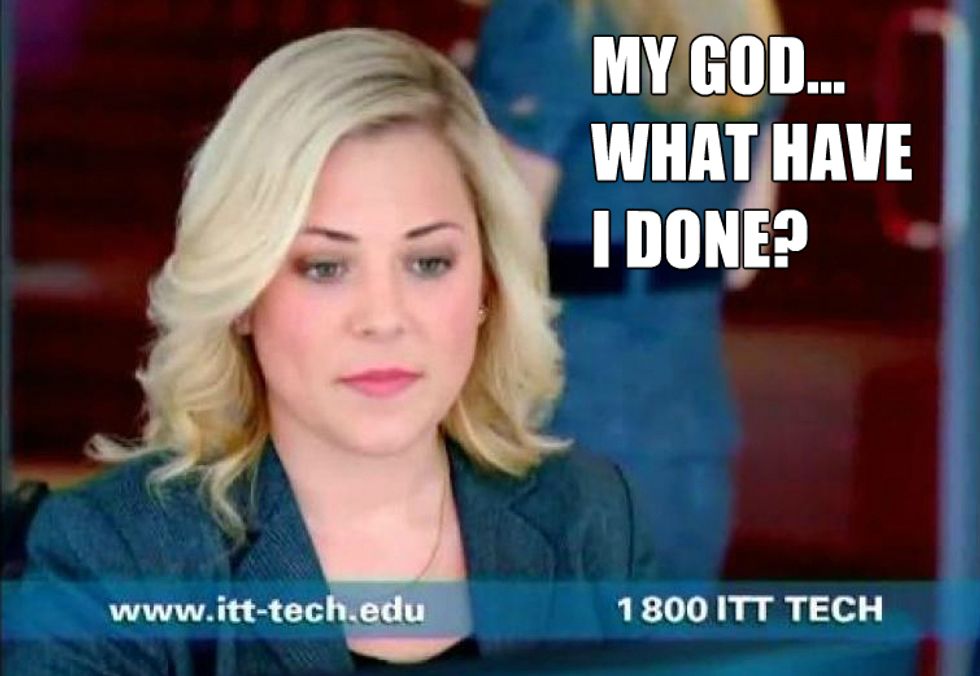 You may ask yourself, 'Where did all my money go?'

Remember when Barack Obama ruined a perfectly good scam by cracking down on for-profit colleges? Under Obama's Department of Education, "schools" that had become remarkably adept at transferring federal grants and student loans from taxpayers to their bottom line, with only minimal money wasted on "educating" their "students," suddenly found themselves being held accountable and treated like the huge scams they were? Several of the worst offenders were forced to prove they actually provided some sort of educational benefit to students -- usually poorer, less able to succeed in education, and far more veteran-y than students who chose community colleges. Unable to do so, they went out of business, and the government set up a loan forgiveness program for students who'd been ripped off. Well! You can count on the guy responsible for Trump "University" to cut some slack for his fellow grifters in the fake-school business. Secretary of "Education" Betsy DeVos announced Wednesday that she would put on hold two rules aimed at reining in predatory practices and helping victims of scam colleges, so the rules can be rewritten to protect for-profit colleges from Big Government Overreach. She just wants to make sure everyone gets a fair shake: both the students who were ripped off, and the schools that ripped them off.

The Education Department will set up committees to draft new rules governing "Borrower Defense to Repaying" (BDR), which forgave loans to students defrauded by schools that used illegal or deceptive recruiting schemes, and "Gainful Employment" (GE), which required institutions to demonstrate their graduates had some probability of getting a job in the field they paid through the nose to train in. Schools that saddled students with excessive debt and inadequate job prospects faced being kicked out of the federal student loan program altogether. For-profit colleges make up 98% of institutions facing punitive action for not meeting gainful employment numbers.

The gainful employment rules have partly gone into effect, while the BDR rule was supposed to start July 1. The Education Department will still process applications for loan forgiveness while the new rules are formulated.

DeVos certainly tried to make it sound as if she was simply cleaning up a big ol' mess created by that regulation-mad socialist Barack Obama:

“Fraud, especially fraud committed by a school, is simply unacceptable. Unfortunately, last year’s rulemaking effort missed an opportunity to get it right. The result is a muddled process that’s unfair to students and schools, and puts taxpayers on the hook for significant costs. It’s time to take a step back and make sure these rules achieve their purpose: helping harmed students. It’s time for a regulatory reset. It is the Department’s aim, and this Administration’s commitment, to protect students from predatory practices while also providing clear, fair and balanced rules for colleges and universities to follow.”

Translation: Why should we bail out people who were stupid enough to be taken in by scammers? And why should scammers have to be held accountable, when they were turning a good profit? And in fact, the Obama rules were designed to reduce taxpayer liability for forgiven loans by requiring the scammy schools to eat much of the cost of those loans.

Apart from toasts being raised in boardrooms of companies that own for-profit schools (but not in their recruitment boiler-rooms, where anyone caught removing their headset is whipped), it appears there weren't a lot of fans of the move. Consumer advocacy group Public Citizen called DeVos's announcement "a craven attempt to avoid the agency’s legal obligation" to protect students' interests by enforcing the rules. In a statement, the group said the rule change could also roll back an Obama rule banning schools from forcing students into arbitration over disputes, which usually (huh!) ended up deciding in the schools' favor.

The American Federation of Teachers also condemned DeVos for siding with the bad guys:

The Trump administration’s actions today show that the White House stands with predatory for-profit schools, not the students they rip off. About the only thing worse than ripping off students with worthless degrees from for-profit colleges is denying them help to relieve their substantial debt, and allowing the schools to continue to prey on students. Given that for-profit colleges were big donors to Trump and other Republican candidates, one wonders whether this is simply a new pay-to-play scheme at the expense of our students, including our veterans, who are much helped by the rules Education Secretary Betsy DeVos wants to eliminate.

Now we're just waiting for Sean Hannity to accuse the AFT of encouraging violence against Trump, DeVos, and scammy colleges.

Democratic Senators Patty Murray and Elizabeth Warren argued that, since the Obama rules had been negotiated with representatives of for-profit colleges, the unilateral rule change simply wasn't kosher, since it ignores the process of setting rules with public and stakeholder input, giving an unfair advantage to an industry that had already agreed to the stricter rules.

“I am extremely disappointed that Secretary DeVos has decided, once again, to side with special interests and predatory for-profit colleges instead of students and borrowers,” Ms. Murray said in a statement.

Oh, and there's one other bigtime critic who weighed in on DeVos's decision yesterday: Massachusetts Attorney General Maura Healey, who made an announcement on her official Twitter account:

That oughta learn the bastards.

Yr Wonkette is supported by reader donations. Please click the "Donate" clicky to send us money, or our high-pressure recruitment staff will talk you into signing over your booze budget.