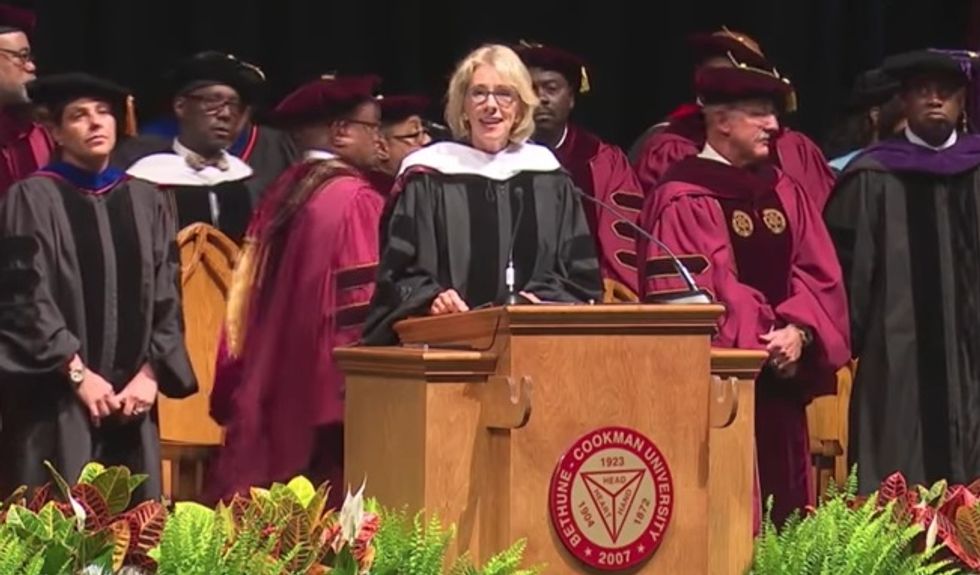 Betsy DeVos, as Secretary of Education, is very concerned about sexual assault on college campuses. Though, uh, perhaps not the way the rest of us are concerned. She has set up meetings with several "Men's Rights" groups to discuss the "epidemic" of mean women lying about sexual assault just to ruin the lives of nice frat boys.

Which, really, is not an actual thing.

Despite the fact that sexual assault survivor groups have been pressuring DeVos for a meeting, the Department has instead reached out to the groups National Coalition for Men, SAVE: Stop Abusive and Violent Environments, and Families Advocating for Campus Equality -- all of whom are very concerned. About THE MEN.

While those last two sound like they are actually advocating for GOOD things, they are not. SAVE is included in a list compiled by the Southern Poverty Law Center of groups that promote misogyny, and their goal is basically to make things as horrible for those who report assault as is humanly possible. For instance, they published a swell article (we wouldn't click if we were you) in which they claimed that domestic violence laws violate their "civil right" to "family privacy." Because, I guess, they feel it is their business and not the government's if they want to beat their wives and children.

The article also whines about the fact that prosecutors are discouraged from asking about an accuser's prior sexual behavior and ought to be able to ask “detailed, often intrusive questions about the accuser’s prior sexual history.” The reason, of course, that this is discouraged is because it doesn't even make sense. Because you can have sex with 100 people and still say no to someone else.

The group also pines for the days when the rapist, not the victim, got to say whether or not it was rape:

Guilty Mind (“mens rea”): Criminal law has long held that if a man believed in good faith that the woman was consenting to intercourse, then he could not be found to have committed rape. Now, that requirement has been largely removed.

And they didn't have to be all 100% sure that the woman was consenting, and could just judge for themselves whether or not a woman was into it:

Affirmative Consent: In the past, a man could reasonably infer that a woman was consenting to intercourse based on her behavior. Now, the woman must give affirmative permission through “words or overt actions” – although there is a lack of consensus regarding which specific overt actions constitute consent.

HERE IS AN IDEA, DUDES: If you're not sure, you can ask! It's not even that hard. The woman is right there, in front of you. Just ask. Like you would with basically anything else you do in life that involves another person, other than, apparently, sticking your dick inside of them.

Families Advocating for Campus Equality is a group formed by mothers of sons who have been accused of sexual assault, who are very sad that all these mean women ruined their sons' bright futures by accusing them of sexual assault, which they know for a fact their good boys never would have done.

They've got a swell website on which they claim that being falsely accused of rape is just as harmful as actually being raped.

Falsely accused students suffer emotional trauma similar to that of rape victims, and yet receive no emotional support from their colleges. A falsely accused young man described his emotions in comparison to that of a female friend who had been raped:

"One important difference, though, is that when she was violated, she received a great deal of help (medical, legal, psychological). Apart from family and friends, I was on my own. My legal and psychological problems had to be dealt with by me at a time when I couldn’t eat, sleep, or think (except, of course, about killing myself)."

The other group coming to the Women Lie About Rape Tea Party, the National Coalition For Men, has been around since the '70s. Usually their big thing is putting an end to unfair Ladies' Nights at bars where women get free admission (even though the point of them is actually to round up a bunch of women and get them drunk so that men can hit on them), and suing companies for having "women's only" networking events and the like.

Oh! And Harry Crouch, president of the National Coalition, had this charming thing to say about Ray Rice beating up his fiancée:

“I’m not saying he’s a good guy. But if she hadn’t aggravated him, she wouldn’t have been hit. They would say that’s blaming the victim. But I don’t buy it.”

So, uh, you know where he stands on stuff. Why are women always forcing men to beat and rape them? It is a mystery!

Of course, this "campus false accusation epidemic" is hardly what it seems. Even among those who are actually found guilty of sexual assault by school administrations, fewer than 30% are even expelled from school. Meanwhile, the majority of those who are raped never report their assaults, and many survivors end up leaving school themselves, unable to deal with what the school and their fellow students put them through as a result of reporting.

Contrary to popular belief (among idiots), reporting a rape is not actually all that good of a time! No one I know who has ever reported a sexual assault has gone "WOAH, best time ever! 10/10, would do again! I hear if you report nine false rapes, on the tenth one they give you a free toaster oven!"

It's not surprising that Betsy DeVos has chosen to give her attention to these groups rather than groups representing sexual assault survivors, but it's still pretty fucked up.