Better Watch Your Mouth, Donald Trump Suing Everyone Who's Mean To Him 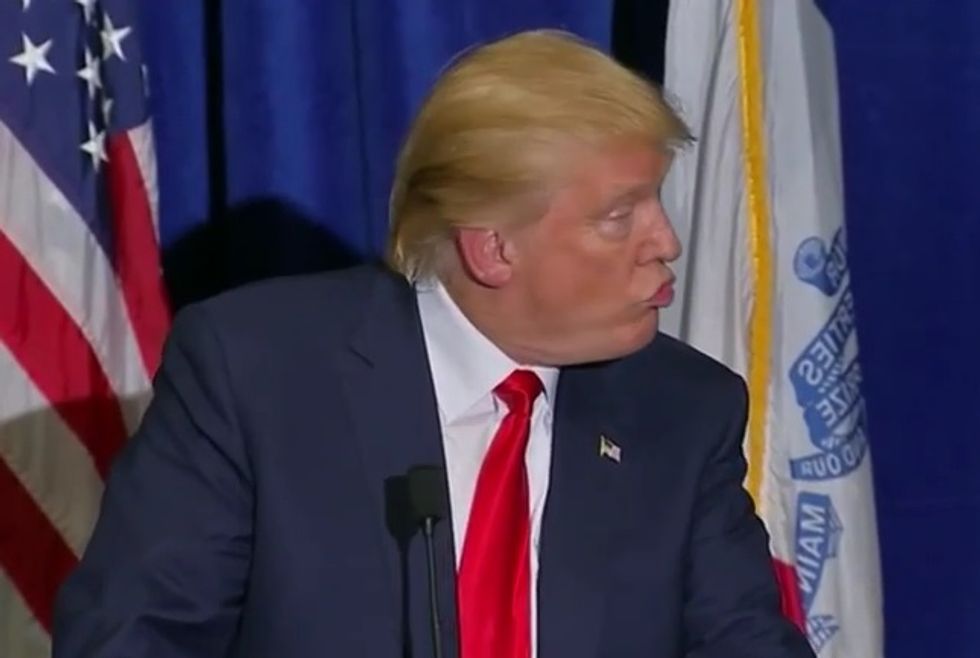 Oh, that Donald Trump! He doesn't take it well when people say mean things about him, and he likes to bring a lawsuit now and then, especially when people make him mad by routing airplanes over his resort. Tuesday, Trump's attorneys sent a Cease & Desist nastygram to the rightwing free-market fanatics at the Club for Growth, which produced this not especially noteworthy anti-Trump ad a week or so back:

It's nothing particularly outrageous, as negative campaigning goes: just a bog-standard ad accusing Trump of being too friendly to liberal ideas, especially tax hikes. But the Trump Organization is threatening a libel suit over the thing, which means that more people will watch it now than ever would have paid attention to it in the first place.

In an attempt to make the news a bit more interactive, the Washington Post has annotated the letter with notes by WaPo writer Chris Cillizza, a project that has given us our very own insights.

Trump Gets All Over Everything

Trump's attorney, Alan Garten, does a fair job of sounding like his boss, interweaving lawyer talk and Trumpish snottiness:

Simply stated, your Attack Ad is not only completely disingenuous, but replete with outright lies, false, defamatory and destructive statements and downright fabrications which you fully know to be untrue, thereby exposing you and your so-called "club" to liability for damages and other tortious harm.

In addition to the "you and your so-called 'club,'" the letter also calls the Club for Growth a "pitiful little group" and accuses the group of attempting a "shake-down" because it asked Trump for a million-dollar donation. And you just have to love the unnecessary comment-thread-style capitalization of "Attack Ad" throughout the letter.

This Isn't A Real Lawsuit

They can't really be serious about some of this crap. The gist of the letter is that the ad "libels" Trump by saying he "supports higher taxes," even though Trump's tax plan, "which is scheduled to be released later this week, supports a lowering of taxes." So obviously, in contrast to a plan that hasn't actually been released yet, the Club for Growth maliciously lied about poor Donald, based solely on the stuff that he has said in the past about raising taxes. Oh, and maybe his promise, reported Aug. 31 in the New York Times, and in every stump speech since then, to impose tariffs on every product a U.S. company makes overseas or in Mexico, as well as his one good idea: eliminating loopholes that allow hedge fund managers to pay practically nothing in income tax.

And then there's the "extortion" claim, which is similarly nuts. The letter reminds the Club for Growth that it had asked Trump for a donation before he became a candidate, and now obviously by running an ad against him, the club is naught but a common thug:

When Mr. Trump, however, presumably unlike many of the other candidates, refused to succumb to your extortionist demands, your only response was to oppose his inclusion in the August 6, 2015 Fox News Republican Presidential Debate, launch a series of misleading Attack Ads targeting Mr. Trump and, ultimately, endorse certain other candidates.

For the sake of accuracy, Cillizza points out that the Club for Growth hasn't endorsed any candidates.

We Found The Real Extortionist!

If anyone's in the shakedown business, it might be this letter, which warns Club for Growth head David McIntosh:

In the interest of avoiding what will certainly be a costly litigation process, we are prepared to offer you the one-time opportunity to rectify this matter by providing us with your prompt written assurances that (i) you have stopped running the Attack Ads; and (ii) you will not generate or disseminate any misleading or inaccurate information or make any factually baseless accusations you know to be untrue with respect to my client at any point in the future.

As Cillizza points out, "This is the essence of this letter: Stop running these ads or we will drag you into a drawn-out legal fight that will cost you way more than you want to spend." Which kind of sounds like a threat, don't you think?

We've Found The Phrase That Pays

Finally, we have to agree with Cillizza that the implied threat in the letter's closing is a thing of stupid beauty: "Please be guided accordingly." Maybe that's a legal term of art that's used in all sorts of correspondence, but it was completely new to us. Cillizza shares our joy:

I am totally ending ALL emails -- friendly and not -- this way. Starting right now.

Good to see you and your wife this weekend. Let’s get some time on the calendar to talk about that idea you had.

It doesn't look like the Club for Growth is especially worried about that "multi-million dollar lawsuit." David McIntosh released a statement Tuesday calling Trump a sad little titty-baby: "Tough guy Donald Trump starts whining when his liberal record is revealed."

That's a low blow, man. You wingnuts can go ahead and fight over whether he can have a key to your True Conservative Clubhouse, but no way is Trump one of us. You just cut that out right now.