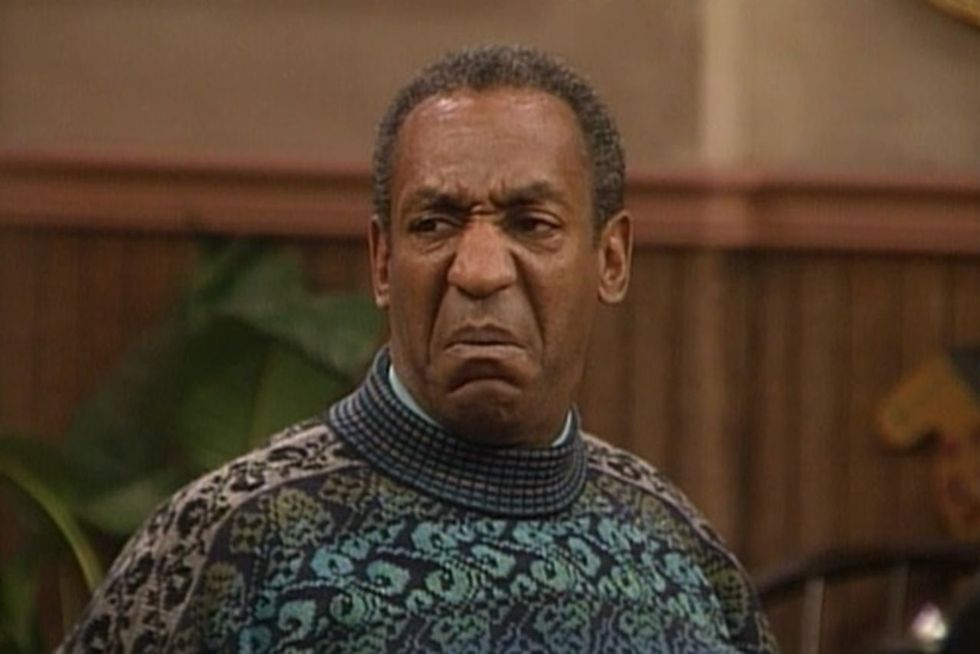 OH HEY, HERE IS SOME GOOD NEWS! The verdict has come down in the retrial of Bill Cosby on charges of assaulting Andrea Constand, and he is GUILTY AS CHARGED, on three counts of "penetration with lack of consent, penetration while unconscious and penetration after administering an intoxicant," as determined by a jury in Montgomery County, Pennsylvania.

Yes, Bill Cosby, once the moral scold of a nation, who declared on "Meet The Press" that Bill Cosby doesn't cause rape (by allegedly raping people), but rather rap music causes rape, will actually probably be serving time for sexual assault (the maximum for each count is 10 years, but we are doubting he will get anywhere near the maximum). The man who ended up somehow getting a mistrial looooooong after he admitted he put the rape drugs in the women, the man whom MANY MANY MANY WOMEN (62 is the current count, according to the TV!) tried to warn us about, whom Tina Fey tried to warn us about, whom BILL COSBY tried to warn us about, when he told "jokes" about how awesome rape drugs are ... ah, what a sweet day. To all those women who have led the way in the #MeToo movement, YOU BUILT THIS.

We detailed the very icky and terrible details of Andrea Constand's case right here (a lawyer wrote it, even!), which was filed way back yonder in 2015, and was the only criminal case that could be brought from all the Cosby accusers (62! did we say 62?), due to statute of limitation issues. (Doesn't mean his ass isn't subject to civil lawsuits, because IT IS, and several are ongoing.)

Cosby was allowed (for some reason) to leave the courthouse today, but not before he could misbehave in the courtroom:

Mr. Cosby sat back in his chair after the verdict was announced and quietly stared down. Several women who have accused Mr. Cosby of abusing them, and attended the trial each day, briefly cheered, then fell silent. Judge Steven T. O’Neill praised the jurors, calling it “an extraordinarily difficult case” and adding, “You have sacrificed much, but you have sacrificed in the service of justice.”

Montgomery County District Attorney Kevin R. Steele asked that Mr. Cosby’s $1 million bail be revoked, suggesting he had been convicted of a serious crime, owned a plane and could flee, prompting an angry outburst from Mr. Cosby, who shouted, “He doesn’t have a plane, you asshole.”

If you'd like to brush up on this case, and on the whole Cosby saga, the New York Times has got you covered. Also, this excellent old Gawker piece.

So yes, mazel tov and glad tidings, Bill Cosby will almost certainly be going to jail, unless the court does something really stupid and gives him probation, like because a judge buys the argument that, aside from all the sexual assault and alleged raping, Bill Cosby is a "good person" and a "very old man" who doesn't even have a private plane. But for now, let's just assume he's going to jail, because we prefer to hope for the best today.

Wonder if they have Jell-O Pudding Pops in jail, just kidding, don't give a fuck.