Bill Cosby To Ring In New Year From Jail, Maybe 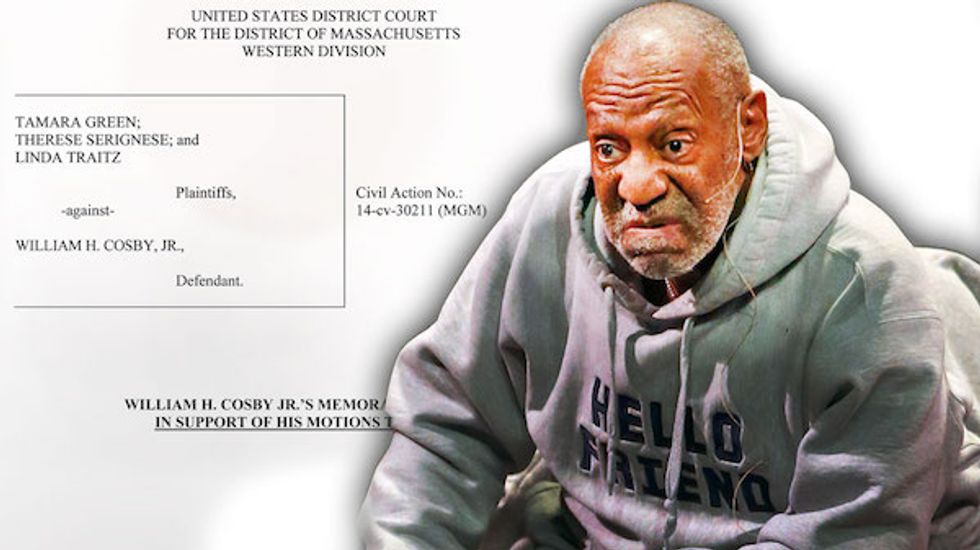 In hot hot BREAKING news this morning, we woke up to find out that JELLO-pop-fueled sexual assault machine Bill Cosby is goddamn finally being criminally charged. It really couldn't have happened to a more terrible guy.

Now, although more than 50 (!!?!!!!) women have come forward with allegations of Cosby's extremely criminal level of creepiness, the statute of limitations on the various assaults means that he can only be charged in the alleged (WE SAID ALLEGED BILL COSBY DO NOT SUE US) 2004 assault of Temple University student Andrea Constand in his mansion. If you can't remember which assault that was, probably because it is tough to keep track when you are reading about double digit sexual assault victims. People had a nice -- OK, wrong term -- rundown of what happened to Constand.

In January 2004, Cosby invited Constand to his mansion, "telling her he wanted to offer her assistance in her pursuit of a different career," the suit said. She agreed to meet him and arrived at his home around 9 p.m. They began talking and, during the conversation, Constand said she was feeling "stressed" about making her career decision, the suit said.

Cosby "then offered [her] three blue pills, which he told her were herbal medication, which would help her relax," the suit said. Constand took the pills with bottled water and within a short period of time, her "knees began to shake, her limbs felt immobile, she felt dizzy and weak, and she began to feel only barely conscious," the lawsuit said. (Cosby had denied drugging Constand, saying that he gave her Benadryl.)

[contextly_sidebar id="sZUl6hjdrGyc2FMemwLccDtDaGdyFcqP"]Oh right. About that denial. It sounds unbelievable even in that context above, but turns out to be outrageously pants-on-fire level of lying when you remember that Cosby already acknowledged in a deposition that he got Quaaludes from a gynecologist, a totally normal thing for dudes to do. Why did he need all those Quaaludes? Cosby copped to saying he didn't need them for a sore vagina, but instead to put them inside ladies, of course.

Where were we? Oh, yeah. Back to the squirm-inducing details of Constand's lawsuit, which form the underpinnings of the criminal complaint against Cosby.

She allegedly told Cosby she didn't feel well and, because she couldn't walk on her own, he led her to a sofa and laid her down, the suit said.

"Subsequently, [Cosby] positioned himself behind [Constand] on the sofa, touched her breasts and vaginal area, rubbed his penis against her hand, and sexually assaulted her," the suit alleges. Constand was "semi-conscious" throughout the ordeal, the suit said, then lost consciousness shortly afterward.

She allegedly woke around 4 a.m., "feeling raw in and around her vaginal area," the lawsuit said. Her "clothes and undergarments were in disarray," the suit said.

We need to go steel wool our brains now.

So all of this awfulness adds up to actual factual criminal behavior in Pennsylvania, hooray! Per this morning's presser, Cosby is being charged with aggravated indecent assault, which is a first-degree felony in good old Pennsylvania. And Cosby's behavior was pretty much textbook felony.

The Montgomery County District Attorney charging the case, Kevin Steele, pointed out that most of the things in the case are not actually disputed: There's no question as to the fact that Cosby gave Constand pills, and there's no question that he digitally penetrated her (STEEL WOOL TIME AGAIN) because all that is in various bits of statements and depositions. The victim has also said that she was frozen, dizzy, and barely conscious, and all of those are things that make consent kinda not even remotely possible. So all that is left to Cosby, most likely, is either a "she wanted it" defense, undercut by the fact that, um, Constand has stated she DOES NOT LIKE THE D, or a "bitch set me up" defense, which you know he's sleazy enough to try.

Ooh, one last thing. As the presser was closing, some dickbag of a reporter had to ask Steele if the charges were harder to get because Constand continued to have a social relationship with Cosby following the assault. Steele didn't answer as we would have, which would have been to yell "FUCK YOU THAT'S NOT HOW THIS WORKS, ASSHOLE, WOMEN OFTEN MAINTAIN THOSE SOCIAL RELATIONSHIPS OUT OF FEAR WELCOME TO RAPE CULTURE" but he did point out that such a thing didn't factor into his charging decision, probably on account of how it cannot, dummy reporter.

Though it is unlikely that Cosby would spend the next couple nights in the hoosegow because he will just post bail even if it is one squidzillion dollars, we're going to spend the next 36 hours dreaming about Cosby counting down to the New Year from the cozy confines of a jail cell in beautiful Montgomery County.