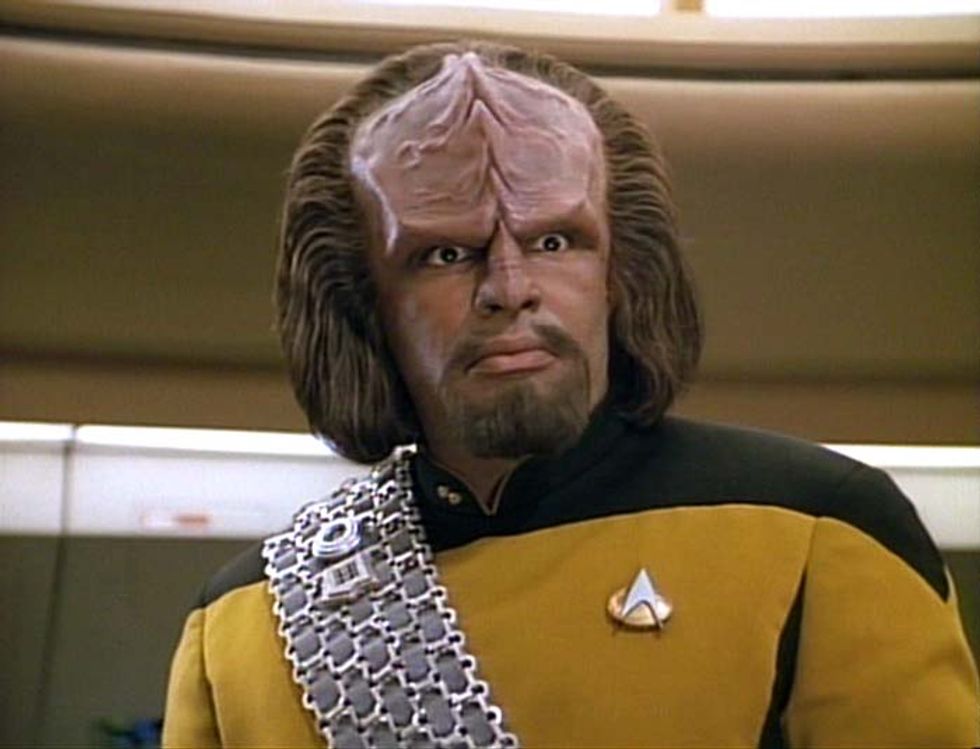 Everybody wants prosthetic foreheads on their real heads

Here is an important thing about Bill O'Reilly: He is never wrong. Oh, sure, he may get some facts a little bit off, like bragging about Inside Edition having won a Peabody award when it actually won a Polk -- after he left the show. But even when he slips up a little, he's always the first to acknowledge it (he is not) and any reaction to stuff he says is not because he said something offensive or wrong (he usually did), but because he is the victim of biased liberal media (he is not).

[wonkbar]a href="http://wonkette.com/600578/bill-oreilly-doubts-even-donald-trump-can-find-jobs-for-dumb-tattooed-blacks"[/wonkbar]With these important considerations in mind, let's take a look at how Billo's handling the criticism of his very silly claim that when Donald Trump brings all the jobs back from China and Mexico (a feat O'Reilly doesn't seem skeptical of), black people will not be able to benefit much, because so many black folks are "ill-educated and have tattoos on their foreheads." Oh, man, is Billo pissed at Big Media for calling him "racist," because he is definitely not racist. He's simply telling people uncomfortable truths they don't want to hear. He spent a fair bit of time no-spinning his own remarks on Monday's The O'Reilly Factor:

Not surprisingly, virtually the entire rant is aimed at proving The Blacks are "ill-educated," when it was more the bizarre claim about the tattooed foreheads everyone was mocking him for. In the interest of being fair and balanced, let's hear the blustering butthead out:

When Al Sharpton and his grievance lobby assert that black Americans are oppressed by a racist system bent on hurting them, he provides an excuse for a litany of apathetic and destructive behaviors. The kids struggling in a bad school, with parents who don't care, needs all the encouragement, leadership can give him or her. Not a list of historical atrocities that can cause even more bitterness for the child. The cold fact is very few political people are willing to address vexing problems by telling you the truth.

We like the suggestion that schools need to teach history focusing on positive, inspiring lessons. Sure, there was slavery, but many slaves came to Jesus, too. (Some more rapidly than others, due to how they were lynched.) O'Reilly launches into a long rant about what people really need from government, like making sure our rights and property are protected, and also ending inheritance taxes. He eventually finds the thread again, getting back to those meanies who complained about his interview with Trump. Yes, bringing jobs back would be nice, but the ugly reality is too many Americans are incapable of holding down even the simplest job:

The big problem is that millions of Americans are so poorly educated and personally irresponsible they simply cannot compete in the marketplace.

The closest Billo gets to any defense of his "tattoos on their foreheads" remark was this oblique reference:

When I asked Mr. Trump how he would combat a culture among some African-Americans that scorns conventional behavior, he replied that job growth would take care of it.

And here we get a tape of the earlier interview, complete with "ill-educated and have tattoos on their foreheads." Billo then resumes his attack on his critics:

Now, the race hustlers, who apparently have not walked the streets of poor neighborhoods lately, immediately accused me of racism. And that is why the acute problem of cultural deprivation among underclass children of all colors is never addressed. The smear merchants hammer anyone who does so. It's beyond disgraceful that powerful people look away from the real problem.

Mr. Trump is noble in his intent to create jobs and train Americans to do them. But that will require more than trade deals and rhetoric. It will require a cultural change in many working class and poor precincts. If you reject the conventional road to success, education and hard work, you'll fail in our capitalistic system, no matter what kind of outlandish promises Bernie Sanders makes. It's all about personal responsibility and motivation. And who is preaching that message? Who?

[wonkbar]a href="http://wonkette.com/600599/north-carolina-vouchers-throw-taxpayer-money-at-jesus-schools-like-founders-wanted"[/wonkbar]All about personal responsibility. And there are no other factors that enter into it, like maybe the systematic shunting of poor kids into the worst, most poorly funded schools, with physical facilities that are falling apart, too many teachers who are burned out, an emphasis on teaching to the test, and rightwing politicians eager to siphon money away from public education with taxpayer-funded vouchers for Jesus schools. In Bill O'Reilly's world, there are no systemic problems, only individual success or failure (which comes of scorning conventional norms).

Oh, and the tattooed foreheads, the ridiculous thing everyone was really pointing and laughing about? That's a distraction. Like women having abortions when they get a headache, it's only a "theoretical" example of the larger problem. How dare you laugh at Bill O'Reilly's stupid forehead tattoo example when ONLY HE has the guts to point out the real problem is cynical politicians who are

promising an endless series of entitlements to a population that's moving away from achievement and into the gimme zone. Gimme, gimme, gimme. Until that deep cultural flaw is exposed, until the phonies, race hustlers and corporate greed heads are called out, we'll continue to see big lies spouted by political deceivers and enabled by a gutless media. God help America...

We are so ashamed of ourselves for making fun of the dumbest part of what O'Reilly said, and not acknowledging the simple incontrovertible truth that if only The Blacks weren't so shiftless, they'd make something of themselves.

Still, when Bill O'Reilly walks the mean streets of poor neighborhoods, as he does so often, just where the hell is he seeing all these people with tattoos on their foreheads? We're still curious.