Bill O'Reilly: If Mexicans Don't Like Stereotypes, Get That Mariachi Band Away From Me 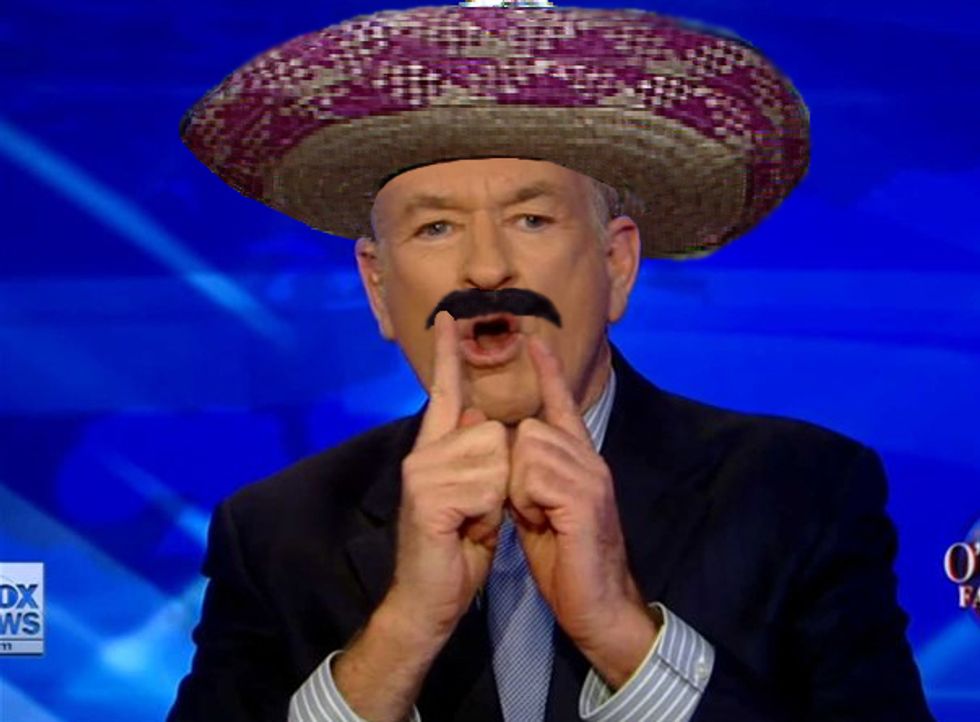 You see, when I was undercover in the Falklands...

Bill O'Reilly and Charles Krauthammer had a fine Old White Guys discussion of rampant Political Correctness on college campuses the other day, concluding with O'Reilly's astute analysis of why Mexispanican people have no cause to complain about being portrayed by gringos who dress up for Halloween in big sombreros and mustaches, because after all, if you go to a Mexican restaurant, that's how all the waiters are dressed. So what's the big deal?

The segment on Tuesday's O'Reilly Factor began with a brief discussion of Monday's resignation of U of Missouri president Tim Wolfe -- or, as Krauthammer called it, "the spectacle in Missouri of the dean, the president, resigning as an act of supreme cowardice in the face of this bullying by the students who've been soaked and seeped in this sense of entitlement and victimization." Yay, exactly the whitesplaining we predicted!

Why are these uppity minorities getting all bent out of shape over little things like racial slurs, underrepresentation, and the occasional swastika smeared in poo? Krauthammer likened the whiny minorities to the "collapse of authority" on campuses in the 1960s; we should be thankful that, before Krauthammer could pine for the good old days when the National Guard shot troublemakers at Kent State and Jackson State, O'Reilly changed the subject slightly, ridiculing the president of the University of Louisville for apologizing after he and other university staff dressed up in stereotypical "Mexican" outfits for Halloween.

Couldn't that at least have happened at U of Wisconsin, so they could say 'Badgers? We don't have to show you no steenking Badgers'?

O'Reilly waxed wroth, which is something like waxing a stereotypical bandito mustache. He asked Krauthammer how that photo could possibly be racist, because reasons:

BILL O'REILLY: Look, the sombrero picture, it's Halloween. They've got sombreros on, OK. Is this racist? If it's racist, I can't go to the Mexican restaurants anymore.

CHARLES KRAUTHAMMER: Well here's why I think it's -- this in the end will die out. Because it really --

O'REILLY: Tell me about the picture. Do you see anything racist about this picture?

KRAUTHAMMER: We have a problem here, Bill. Because I'm in Washington and all I can see is my own mug.

O'REILLY: All right, it's a bunch of people, adults with sombreros, all right, a few have mustaches and they're holding carachases [sic] or whatever that --

KRAUTHAMMER: Is the reference here to the Three Amigos? To the movie?

O'REILLY: Yeah. But if you go to any restaurant, Mexican restaurant in the world, they come out and they're singing "Guantanamera" with the sombreros on.

Truly a great Fox News moment: one guy who can't see the photo arguing nonetheless that it proves Western Civilization is on the verge of collapse under the oppression of Political Correctness, while another guy argues that tacky stereotypes in a theme restaurant determine what's appropriate in the wider culture.

O'Reilly closed with an apt comparison to the Salem Witch Trials, in which people were actually hanged dead, which is so much like people being offended by stereotypes. Then the show went to commercial.

So there's our latest contribution to the National Dialogue on Race: The kids are all crazy entitled multi-culti hippies and this is stupid, because haven't you been to Los Amigos' Casa de Carne lately? Heck, we've been to some Irish pubs, and it never once bothered us when the waiters drunkenly propositioned us with an offered to rub us down with a loofah. We simply pointed out that falafel is not a traditional Irish dish, drank six Guinnesses, then cried sentimentally as we sang about our mother.

After the show, Krauthammer and O'Reilly went home, watched some Amos 'n' Andy DVDs, and wondered what happened to the days when life was simpler.