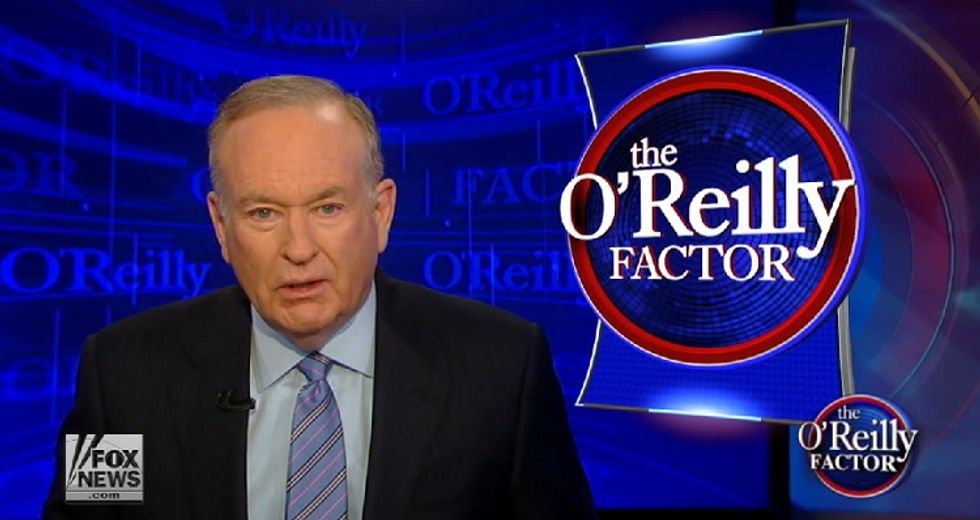 Bill O'Reilly just wants you to know that he has never, ever, not once in his life ever exaggerated his bravery as a war correspondent. And if you say otherwise, he will END YOU, as he let a nosy New York Times reporter know Monday. Or as the Times rather delicately puts it:

Mr. O’Reilly’s efforts to refute the claims by Mother Jones and some former CBS News colleagues occurred both on the air and off on Monday. During a phone conversation, he told a reporter for The New York Times that there would be repercussions if he felt any of the reporter’s coverage was inappropriate. “I am coming after you with everything I have,” Mr. O’Reilly said. “You can take it as a threat.”

It's a nice anecdote, but just wait a few years -- by then, O'Reilly will be recalling the time he won a knife fight with a mob of angry New York Times reporters. In a war zone.

The Times notes that NBC and Fox are taking slightly different approaches to evidence that their reporters have burnished their experiences in war zones: NBC investigated Brian Williams's "misstatements" about being in a helicopter that came under fire and then suspended him for six months. Fox has declared Bill O'Reilly the truthiest reporter ever, and on Monday's O'Reilly Factor, Billo himself declared himself vindicated by some 1982 CBS footage of demonstrations that show without a doubt that he witnessed violent combat while covering the Falklands War, just like he's always said. And it was a pretty convincing defense, as long as you don't worry too much about little details like the difference between what he claimed to have witnessed and what the video actually shows.

Remember, kids, what kicked all this off was a Mother Jones piece detailing several times that O'Reilly has referred to himself as having reported from a "war zone" during the Falklands conflict. In reality, like every other member of the press, O'Reilly was actually 1200 miles away, in Buenos Aires, Argentina. So then O'Reilly retro-splained that he'd never claimed to have witnessed battle in the Falklands when he said he witnessed battle in the Falklands -- he meant the war zone of Buenos Aires, where he personally saw Argentine troops firing live ammo into crowds of demonstrators, leaving many dead, and that he'd saved an injured cameraman's life. Sure, not a single one of his former CBS colleagues agrees with that account, because they are all lying liars who are out to get Bill O'Reilly.

It's a pretty cool adventure in goalpost-moving: O'Reilly sets it up by saying that the June 15, 1982, clip shows that "I reported accurately the violence was horrific," and then shows the video: chanting angry crowds, some shots of police firing what the reporter clearly says are "tear gas and plastic bullets." On the other hand, Dan Rather did say that the Argentine government "did battle with its own people," so there it is right there: battle. And Bill O'Reilly WINS!

OK, sure, there's no video of troops mowing down people by firing live ammo into the crowd, but Bill O'Reilly also managed to get former NBC Miami bureau chief Don Browne on the phone. Browne -- who wasn't actually in Buenos Aires, but heard all about it from the reporters who sent him footage -- confirmed that it was definitely a total war situation, except for how he didn't confirm that at all -- Browne described the demonstrations as a "very intense situation where people got hurt" and noted that there were tanks in the streets, too. See? All-out war!

Browne even agreed that "a lot of people died" -- except he was talking about the actual fighting in the Falklands, not the demonstrations in Buenos Aires. There's a hilarious bit at about the 4:10 mark where O'Reilly asks Browne to confirm that it was an extremely dangerous situation, and Browne simply notes that the NBC crews were "veteran correspondents" for whom the assignment was "business as usual." Sure, maybe Bill O'Reilly was wetting his pants, but the NBC guys, not so much. But that at least gave Billo the chance to insist again that "it was extremely violent from where I was." And no, Browne didn't have any recollection of troops mowing down civilians, either. But O'Reilly is absolutely sure there were fatalities. Browne did at least agree that it was a tense, potentially dangerous situation, and if that isn't the exact same thing as a war, then we don't know what is.

O'Reilly then talks to Mediaite's resident wingnut, Joe Concha, who agreed that the Mother Jones article was a "hit job," and as proof, noted "I don't see any established major media picking up this story." Except for maybe some little Podunk outfits like the New York Times.

In any case, O'Reilly closed the segment by noting that a Christian Science Monitor story from June 17, 1982, described the scene around the Presidential Palace as a "battle zone." Or as O'Reilly pronounced it, "BATTLE ZONE." He then proclaimed the controversy officially over: "I want to stop this now. I hope you can stop it, I really do." So shut up, you. WE'LL DO IT LIVE.