Bill O'Reilly: Let's Partial-Birth Abortion Our Unborn Baby, Dear, I Have A Headache 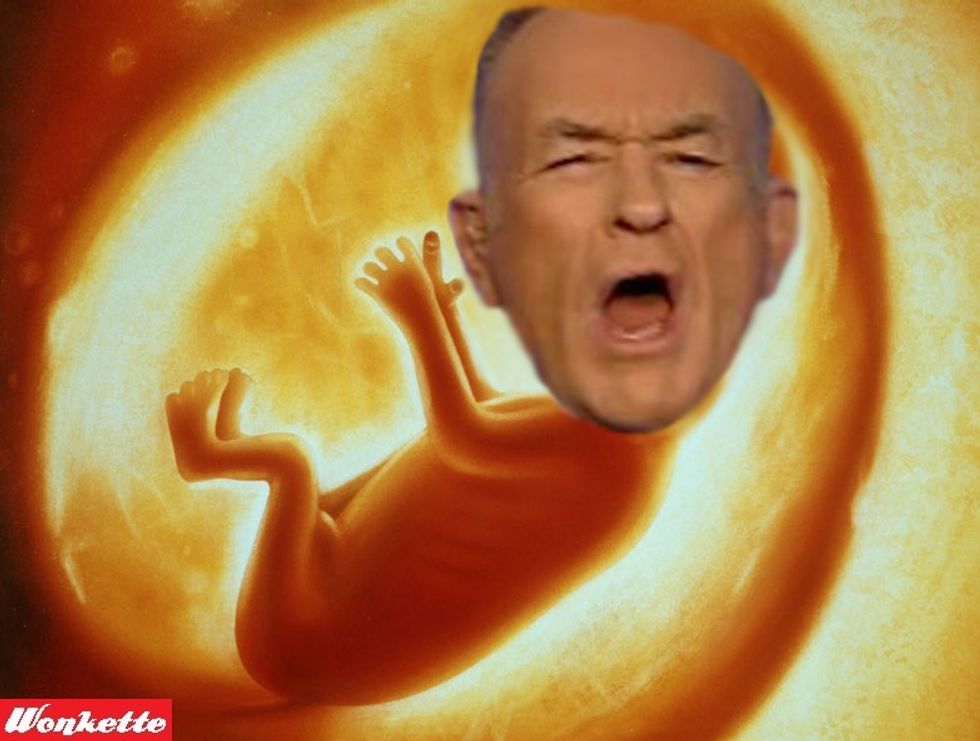 Wonkette apologizes for any nightmares

Bill O'Reilly continued his sterling record of understanding the complexities of the abortion issue Friday, insisting on The O'Reilly Factor that if potential restrictions on abortion were to include an exception to protect a woman's health, those sneaky women would probably just fake a headache to get a third-trimester abortion, the way women lie about pretty much everything:

Billo's insight came in the middle of a discussion about how primary elections draw the participation of the most extreme parts of the electorate, like for instance people who believe women should be able to have an abortion at any point up until the fetus is accepted to Harvard Law:

If you are going to say that the two Democrats running for president both favor pretty much abortion at any time, for any reason, and they hide behind the women's health issue, but that could be a migraine headache, you know. OK, I don't want to have the kid, my boyfriend left me, my husband left me, whatever it may be, I got a migraine, kid is going to be born next week.

[wonkbar]a href="http://wonkette.com/489829/irish-hospital-lets-woman-die-because-her-life-wasnt-endangered-enough-for-abortion"[/wonkbar]Clearly, Billo's been studying up on the fake reasons for which women seek late-term abortions, such as "the fetus is dying and can't be saved" "the woman and fetus are going to die but the fetus still has a heartbeat, and you live in goddamned Ireland" and "I have a headache."

Fox contributor Kirsten Powers at least had the wherewithal to reply, "I don’t think that many people get abortions because they have a migraine headache,” somehow managing not to vomit onscreen. O'Reilly, who knows pretty much everything about everything except for how tides work and why black people aren't that fond of Donald Trump, talked right past the dumb woman, who clearly is not an expert on these matters like Bill O'Reilly (even if he doesn't know the difference between "hypothetical" and "theoretical"):

O'Reilly didn't bother with any details in this broadcast, but what happened in Kansas was the assassination of George Tiller in 2009, after O'Reilly had spent years calling him "Tiller the Baby Killer," comparing him to Dr. Mengele, and claiming Tiller performed third-trimester abortions for women who had "a bit of a headache or anxiety" or felt "a bit blue."

Then Billo was done with abortion, and explained how electing any Democrat would inevitably lead to socialist income redistribution, an economic crash, and "Armageddon." Also, both Bernie Sanders and Hillary Clinton are "radicals."

Just listening to the 5-minute clip while writing this gave us a headache, so we guess we'll go have an abortion now.