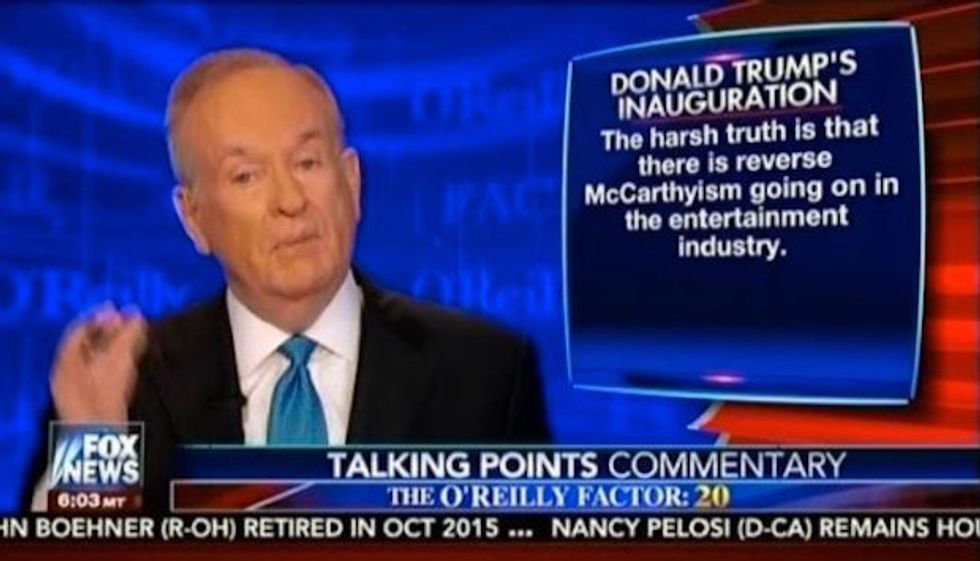 On Tuesday night's edition of the "O'Reilly Factor," Bill-O went on a bit of a rant about how terrible it was that entertainers were refusing to perform at Donald Trump's inauguration, because of a terrible thing he is calling "Reverse McCarthyism."

OOH! What is Reverse McCarthyism, you ask? Is it a new dance craze? Is it a sexy sex move they learned about at a Satanic orgy in a pizza restaurant? Is it a lifestyle choice invented by Trump's former lawyer, Roy Cohn, where you spend your days persecuting people for being gay and your nights having lots of sex with young blonde men? Nope! "Reverse McCarthyism" is, according to Bill O'Reilly, something having to do with celebrities fearing that performing at Donald Trump's inauguration could have a negative effect on their careers. Because people would not like them if they did that. Or something!

"The harsh truth is that there is reverse McCarthyism going on in the entertainment industry. Remember that in the 1950s, Wisconsin Senator Joseph McCarthy started accusing people in Hollywood of being Communists. That led to a black list where people were not hired because McCarthy smeared them.

Today, it seems anti-Trump zealots may be doing the same thing. If you are a Trump supporter, you are a bad person, and a number of entertainers believe their careers will be harmed, should they associate with the new Trump administration. Again, that is terrible, an awful state of affairs. Talking Points believes enough is enough of the anti-Trump movement. The man won the election, give him a chance. Respect the process. Stop the nonsense."

This goes, he claims, even for celebrities who just simply oppose Trump themselves. All the celebrities should be willing to perform at Trump's inauguration, because he, Bill O'Reilly, has decided that this is not political at all, but a celebration of the "peaceful transfer of power." He claims that it is unfair that if celebrities perform at the inauguration, that they may lose jobs, or -- worse yet -- be yelled at on Twitter by people they do not know. Which is a thing that certainly never happens to anyone on the left, or celebrities who godforbid appeared in a remake of the Ghostbusters movie.

May I just take a second and point out here that Bill O'Reilly does not think that bakers should have to make cakes for same-sex weddings, and once compared doing so to making cakes for a Nazi picnic?

O'Reilly makes a lot of the "give him a chance" and the "peaceful transfer of power" rhetoric, as if it is the job of celebrities to normalize Donald Trump for the nation and convince them that everything is definitely totally fine. It is not! Their only obligation is to themselves, and -- if they like -- to their fans.

He notes that some celebrities, including Ricky Martin, Jessica Simpson, and Andrew Lloyd Webber, were willing to perform at the Bush inauguration, forgetting that Ricky Martin clearly regretted the move and later gave Bush the finger during performances, that Andrew Lloyd Webber also once thought Starlight Express, a musical on roller skates, was a good idea, and that Jessica Simpson was a Republican Southern Baptist pop star whose whole "thing" was being a virgin until she got married and getting very confused about canned tuna. I don't know what her views are now, but I do like her shoes, so whatever.

Basically, it's all just a new rehashing of the constant conservative whine about how it's NOT FAIR that Hollywood celebrities are more liberal because conservatives should get to be the cool kids.

Weirdly, O'Reilly was called out on his bullshit, and his wild speculation that celebrities would be denied jobs if they performed at the inauguration, by none other than, uh, Charles Krauthammer.

CHARLES KRAUTHAMMER: You know, I find it hard to get exercised over the fact that we may be short a Rockette at the inaugural celebration.

O'REILLY: It's okay to deny somebody a job in Charles Krauthammer's world if they show up at the Trump inauguration? That's okay? To deny someone a job?

O'REILLY: But that's the fear, that's the cloak of fear that we are dealing with now.

KRAUTHAMMER: But you've shown no evidence that that's what's at play.

KRAUTHAMMER: They don't want to play for Donald Trump.

KRAUTHAMMER: This is a republic.

KRAUTHAMMER: You are not summoned to perform for the king or for the dictator. In some places, if Kim Jong-un calls you to sing, you better show up, because otherwise you're not gonna make it to the morning.

O'REILLY: You -- you don't know anything about the Hollywood industries. They will perform for Joseph Stalin, okay, if they think it is going to help their career. Okay?

HAHA, shallow celebrities and Rockettes and members of the Mormon Tabernacle Choir couldn't possibly have any real convictions about anything, they just do what is best for their career! It's not like they are human beings or anything like that!

It's interesting, really, that O'Reilly is so quick to blame some kind of systemic oppression for the lack of entertainers willing to perform for Donald Trump, when he so often insists that no such thing exists in other ways. Perhaps, if conservatives want in on the entertainment industry, they should pull themselves up by their damned bootstraps and learn how to play instruments or sing or dance or act or something, instead of demanding that those who did coddle them and support their presidential candidate.