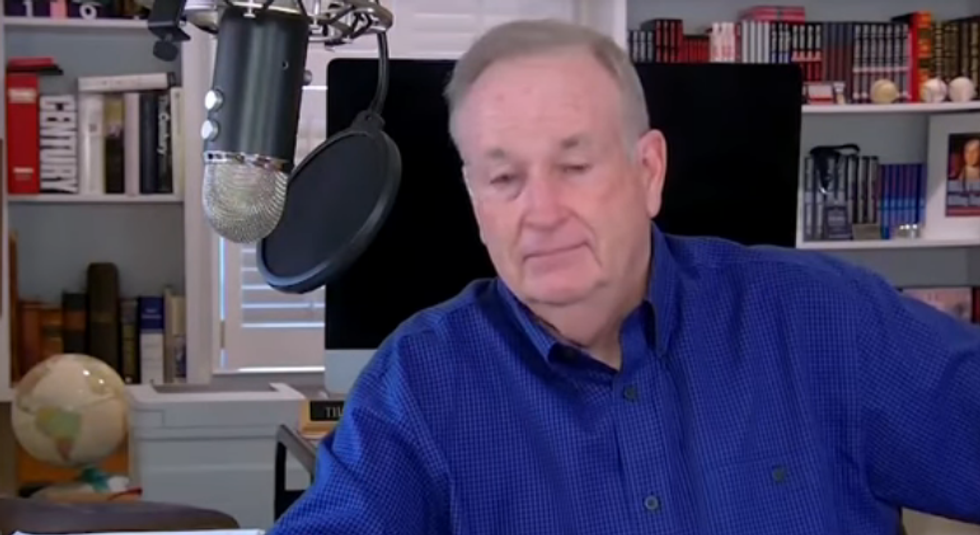 Bill O'Reilly has said many stupid things ever since the New York Timesrevealed he had spent $32 million of his lunch money to settle yet another sexual harassment case. According to NYT, BillO sent Lis Wiehl, a former Fox News analyst, "gay pornography" and had a "nonconsensual sexual relationship" with her, and his Fox News bosses were so mad about it they renewed his contract and gave him a raise. O'Reilly says it's a bunch of lies, just like THE MULTITUDES OF GROSS ALLEGATIONS against O'Reilly are also lies. Wonkette would simply note again that $32 MILLION IS A LOT OF MONEY FOR A BUNCH OF LIES.

But O'Reilly knows whose fault all this is, and it is God's. How dare Almighty God grab Bill O'Reilly's penis and yank it toward temptation? Yea, though Bill O'Reilly walks through the shadow of death, he will fear no evil, OH NO GOD'S GOT HIS PEENER IN A HEADLOCK AGAIN:

GRRRR GOD! And to think just a few years ago that O'Reilly was decidedly happy with God, because if there was no God, how da moon get dere?

O'Reilly added that if he dies tomorrow and gets to meet The New York Times in heaven (LOL Bill O'Reilly is never going to heaven), he has a question. Or maybe "you guys" is what he calls God. Just read this fucking quote, we don't know what it means:

"If I die tomorrow and I get an opportunity, I'll say, 'Why'd you guys work me over like that? Didn't [you] know my children were going to be punished? And they're innocent'" ...

His poor children! We assume he's including his damned dirty liar (not a liar) daughter who said she “witnessed her father dragging [her mother] down a staircase by her neck, apparently unaware that [she] was watching.”

SPEAKING OF THINKING OF THE CHILDREN! Bill O'Reilly is also thinking of former Fox host Eric Bolling's children. You see, Bolling was also canned from Fox News over sexual harassment allegations. Tragically, just after that, Bolling's 19-year-old son died. So of course, in an interview with the New York Times podcast "The Daily," O'Reilly said this:

“I urge you to think about what you put in your newspaper,” he told the Times. “Eric Bolling’s son is dead. He’s dead because of allegations made — in my opinion and I know this to be true — against Mr. Bolling.”

Oh fuck off, O'Reilly. That was Bolling's response to O'Reilly, but he said it nicer:

For the record, O'Reilly apologized to Bolling. He made excuses while he was apologizing, because he's a total shit, but he apologized.

Monday morning, Megyn Kelly used her usually shitty talk show to have a serious moment. Responding to a statement from O'Reilly that NOBODY IN HIS ENTIRE CAREER had EVER filed a complaint against his gross penis, Kelly said, well actually that's not true, because she had complained. Watch her tell the story of emailing Fox News brass about O'Reilly in 2016, and not only having them do nothing about it, but apparently green lighting him to attack Fox News sexual harassment victims on his show that very night:

“O’Reilly’s suggestion that no one ever complained about his behavior is false. I know because I complained.” @megynkelly on Bill O’Reilly pic.twitter.com/BO8ifQcJbu