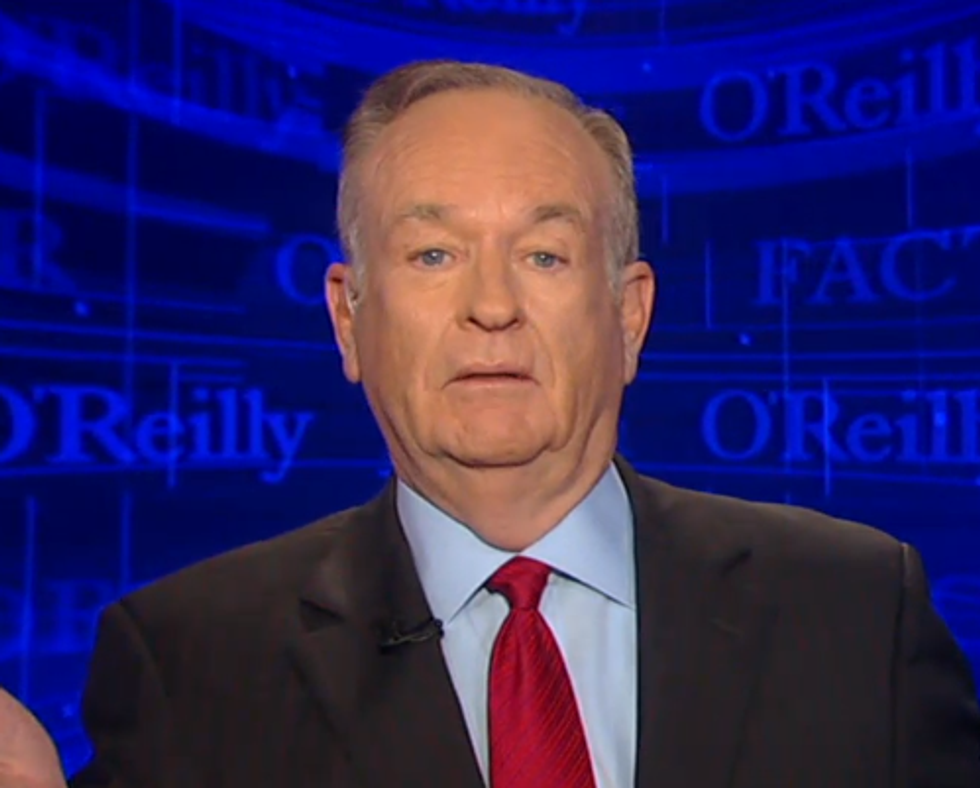 Bill O'Reilly is getting pretty sick and tired of the Obama administration refusing to follow Bill O'Reilly's "common sense" advice on Ebola. First, Dr. Tom Frieden, the director of the Centers for Disease Control, refused to go on O'Reilly's show to explain why the CDC will not do exactly what O'Reilly says, which is why Frieden should resign, obviously. And now President Obama won't even arrest that evil uppity threat-to-national-security nurse, Kaci Hickox, who does not have Ebola, and has not shown any symptoms of Ebola, but, as Gov. Chris Christie said, is "obviously ill" anyway. The nerve!

The administration still does not have a coherent Ebola policy. There is no travel ban from West Africa, and there’s no mandatory quarantine. Thirty-three-year-old nurse Kaci Hickox is defying a state of Maine quarantine because she can.

Just because the administration has not adopted the demands from Fox News and the rest of the rightwing to impose a travel ban does not mean there is no policy. The actual experts have explained that a travel ban would be counterproductive and more dangerous. That's not a lack of policy; that's just a refusal to take medical advice from Fox News. IMPEACH!

Hickox has explained that she does not believe the quarantine placed on her is scientifically or constitutionally justified. Not that she knows what she's talking about; she's just some "left-wing" nurse, AND a "registered Democrat," AND she has "ties to the CDC." Bill O'Reilly is neither a registered Democrat nor does he have any ties to the CDC, so he clearly understands this whole Ebola thing better than Hickox does. And even if she is right, and the mandatory quarantine is not justified, so what?

That may be true, but that’s not her call. Ms. Hickox, working in West Africa with Ebola patients, and if public health authorities in the U.S. deem a 21-day quarantine period necessary, so be it.

Ms. Hickox should be taken into custody. But she will not be because the feds have no Ebola policy at all.

By "public health authorities," O'Reilly means "governors who think it's just common sense to quarantine all the people." And while it's not Hickox's call to determine whether they are right, we're pretty sure that's not O'Reilly's call either. But Bill and his fellow Fox News wingnuts have done an excellent job of persuading America that the Obama administration should be taking orders from Fox. A new CBS poll shows just how effective The Ebola Panic has been:

Well done, Fox! You now have Americans convinced that your policies are much more sound than the CDC's policies and that there is no way stupid Obama and his stupid administration is prepared to handle the Ebola outbreak sweeping the nation, or at least affecting the one person in America who has Ebola, but same difference. Arrest them all anyway!

It's not like O'Reilly has ever been shy about claiming that health care workers are actually dangerous criminals. Who can forget O'Reilly's crusade against Dr. George Tiller, whom he affectionately nicknamed "Dr. Tiller the Baby Killer" and compared to Nazis and al Qaeda? Yeah, it was some real solid serious Fair And Balanced Reporting the way O'Reilly dedicated dozens of his shows to railing against an abortion doctor, until someone who agreed with O'Reilly went and assassinated Dr. Tiller, and then it was no longer necessary to call upon America to rise up against this murderous MD who was simply performing legal medical procedures.

On second thought, if O'Reilly is going to go after Nurse Hickox now, and any other scumbag health care worker who dares to go to West Africa to try to do some good and fight the Ebola epidemic, maybe health care workers should be taken into custody. For their own protection.