Bin Laden Was Only Thing Keeping Schwarzenegger and His Wife Together 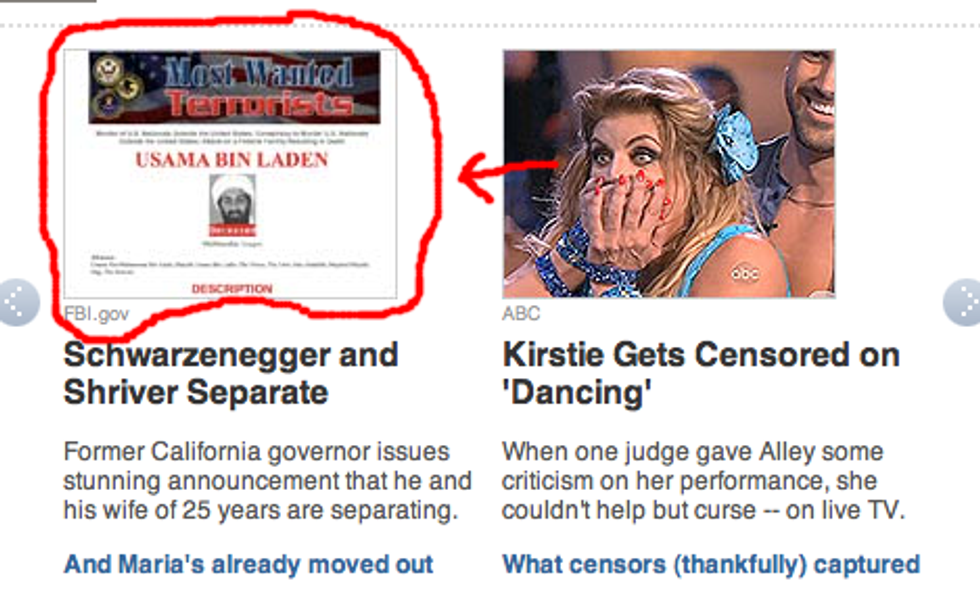 Oh no! According to this Arianna Huffington news box that came up on our junk America On Line 3.0 e-mail account from 1994, Osama bin Laden was the only guy keeping Arnold Schwarzenegger and his Kennedy wife together, and now that he's no longer alive to counsel them about their marital issues, California's official mom and dad have separated. This is so sad! Bin Laden's life may have had its ups and downs, but he was so good at marriage he had three of them going at the same time.

Over the years, the marriage between the international celebrity and the daughter of the Kennedy dynasty has come under close scrutiny, especially during the 2003 recall of Gov. Gray Davis, when The Times reported on Schwarzenegger's lengthy history of groping women. At the time, Shriver defended her husband, helping lift him to victory in the free-for-all contest.

How's the former governor dealing with this?

"The whole industry has not come up with a new line of action heroes so [people say] let's go see the mature ones -- that's what I call them, the mature ones -- because there's nothing new around," Schwarzenegger said in the interview. "That's good news for me."

With clarity and modesty, of course.

The Kennedy family is never going to recover. Arnold Schwarzenegger ignored his family and MISSED HIS SON'S KARATE MATCH in addition to forgetting to buy the kid a Turbo-Man action figure because he was too busy at work. At least that's how we remember it. And then Sinbad became governor and had to fix the huge deficits Schwarzenegger left him. And Schwarzenegger's son grew up to be Darth Vader. [LAT]