Bipartisan Nice Time: Lawnmower Man Cleans Up DC Memorials His Own Damn Self 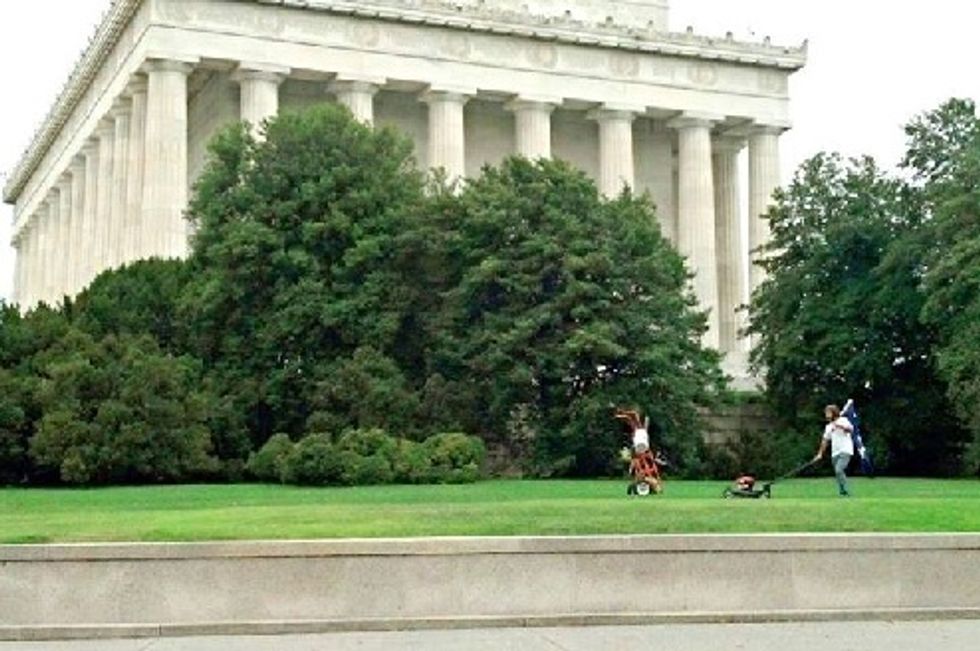 OK, notthat Lawnmower Man. Here is a gentleman who has taken it upon himself to tidy up memorials and monuments around Washington DC during the government shutdown. Says Gawker:

Chris Cox of South Carolina could be seen popping up at various memorials over the last few days with his trusty chainsaw, lawnmower, and Palmetto State flag in tow.

Calling his one-man-army the "Memorial Militia," Cox has tasked himself with making the city's parks and malls look "presentable" ahead of the Million Vet March scheduled for this weekend.

Is he a we-don't-need-a-federal-government angry wingnut? He just might be, and we don't care -- this is good citizenship, and we approve, regardless of his dumb stupid motives what are stupid and dumb.

Cox told CBS DC that he's not motivated by politics, for whatever that's worth:

Initially, Park Service Police allowed Cox to clean up, but they eventually asked him to stop, because of liability concerns, or because they are Nazis. He agreed, and has stopped his one-man militia raid on trash.

Now, do we really need to get into why even though this was a really good thing for Cox to do, it's also no basis for a claim that we don't need no government nohow? Spend 30 seconds scanning the comments on the CBS article, and it's pretty clear that we actually do need to explain that volunteerism is a really awesome thing and that it's no replacement for actually having a functioning government. If Galt's Gulch doesn't hire somebody to pick up the garbage, it's eventually not going to get picked up -- your whole Tragedy of the Commons thing. And while telling Chris Cox to stop mowing lawns because of liability worries seems excessively lawyerly, it's also not exactly a trivial concern -- really cleaning up can require a chainsaw, after all (yes, yes, we'll get rid of liability lawyers when we build Galt's Gulch, too, and everyone will be happy).

So good on Chris Cox! But let's also get the real maintenance people back to work, please? We hear they have insurance already.