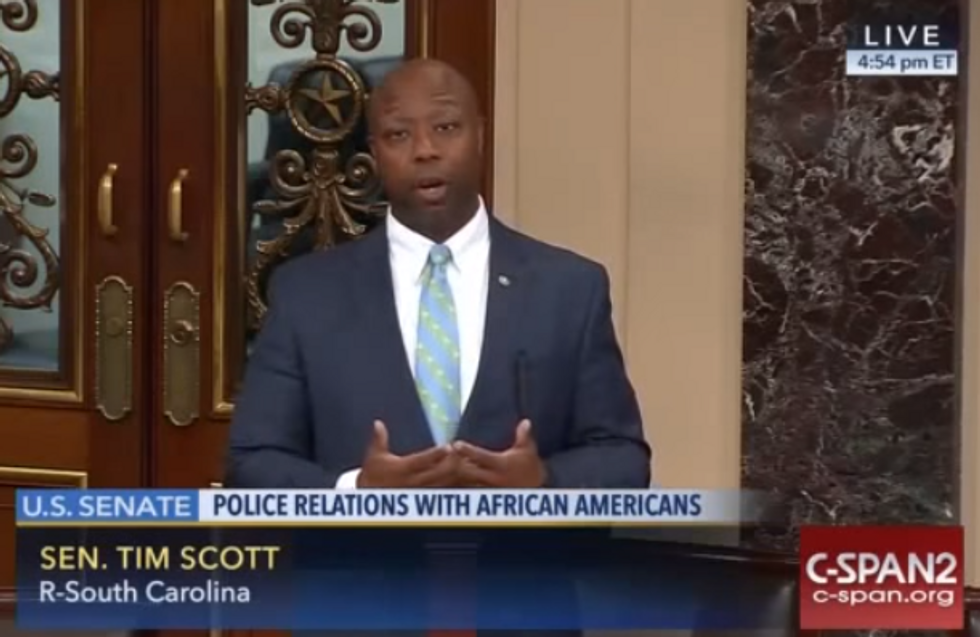 Ever since five Dallas cops were murdered while protecting people protesting the killings of black men like Philando Castile and Alton Sterling, by cops, there's been a lot of truth-telling going on. Something about the events of that week has led people who might normally stay silent to speak the hell up about injustice where they see it.

[wonkbar]<a href="http://wonkette.com/603862/daily-caller-and-redstate-post-thoughtful-reactions-to-dallas-police-shootings-wait-what"></a>[/wonkbar]The Daily Caller and RedState published thoughtful pieces last week from conservative white men, which contained Real Talk about police treatment of black folks in America. Now, another conservative man -- a U.S. Senator, a member of the GOP, and a black man -- is speaking about his own experiences.

Sen. Tim Scott of South Carolina spoke on the Senate floor Wednesday about being followed by cops, being pulled over far more than anyone could consider reasonable, and even being stopped with skepticism by Capitol police as he, a United States senator, was just trying to do his work:

I shuddered when I heard Eric Garner say, "I can't breathe." I wept when I watched Walter Scott turn and run away, and get shot and killed, from the back. And I broke when I heard the 4-year-old daughter of Philando Castile's girlfriend tell her mother, "It's OK. I'm right here with you." These are people lost forever. Fathers, brothers, sons. Some will say, and maybe even scream, "but they have criminal records, they were criminals, they spent time in jail!" And while having a record should not sentence you to death, I say, "OK then, I will share with you some of my own experiences, or the experiences of good friends and other professionals.

I can certainly remember the very first time I was pulled over by a police officer. I was driving a car that had an improper headlight, it didn't work right. And the cop came up to my car, hand on his gun, and said, "Boy, don't you know your headlight's not working properly?" I felt embarrassed, ashamed, and scared. Very scared. [...]

IN the course of one year, I've been stopped seven times by law enforcement officers. Not four, not five, not six, but seven times, in one year, as an elected official. Was I speeding sometimes? Sure. But the vast majority of the time, I was pulled over for nothing more than driving a new car in the wrong neighborhood, or some other reason just as trivial.

Scott told stories of being followed home by cops for no apparent reason, only to be pulled over for alleged violations that occurred during the drive home. Or being pulled over on "suspicion" that he was driving a stolen car, even though the license plate on his car didn't match that of a stolen car.

Oh, and here's what happened to his brother:

[He] became a command sergeant major in the United States Army, the highest rank for an enlisted soldier. He was driving from Texas to Charleston, pulled over by a law enforcement officer who wanted to know if he had stolen the car he was driving, because it was a Volvo.

Rare moment of personal interjection here: Yr Wonkette drives a Volvo, and is a white man. It would never cross our mind in a million gajillion eleventy years that we might be pulled over because the cop thinks we stole the car. Just saying.

One of Scott's staffers even went so far as to sell his own nice car, a Chrysler 300, because he was tired of being targeted. Scott says that staffer told him, "There is absolutely nothing more frustrating, more damaging to your soul, than when you know you’re following the rules -- and being treated like you are not."

As we mentioned, Scott even has been stopped by Capitol police, both as a senator and as a congressman, because they just didn't "recognize" him. He was wearing the little pin that ID's him as a senator and everything, but ...

I recall walking into an office building just last year, after being here for five years on the Capitol. And the officer looked at me with a little attitude, and said, "The pin, I know. You, I don't. Show me your ID."

Scott says things like that have happened at least three times.

Scott closed with this plea to his fellow lawmakers, including the white people he serves alongside as a member of the GOP:

Today, I simply ask of you this: recognize that just because you do not feel the pain, the anguish of another, does not mean it does not exist. To ignore their struggles -- our struggles -- does not make them disappear, it simply leaves you blind, and the American family very vulnerable.

Look we don't agree with Tim Scott on much of anything else -- he is, after all, a Republican senator -- but he's speaking truth here. Sen. Barbara Boxer, Democrat of California, agreed:

Sen. Barbara Boxer, D-Calif., thanked [Scott] for speaking candidly about his experiences, especially given the lack of diversity in the chamber.

“As much as all of us want to walk in each other’s shoes, because each of us has different experiences in our lives, it really matters who’s in the room, who’s at the microphone, who’s sharing the truth” she said. “And you have shared a truth with us today.”

There's not much left to say that Scott didn't cover.

Share everything in this post with your Fox News-watching uncle or the leader of your bunco group or whoever needs to hear it: