Black Middle-Schooler Charged With 'Stealing' Free Milk From Lunch Line, For Some Reason 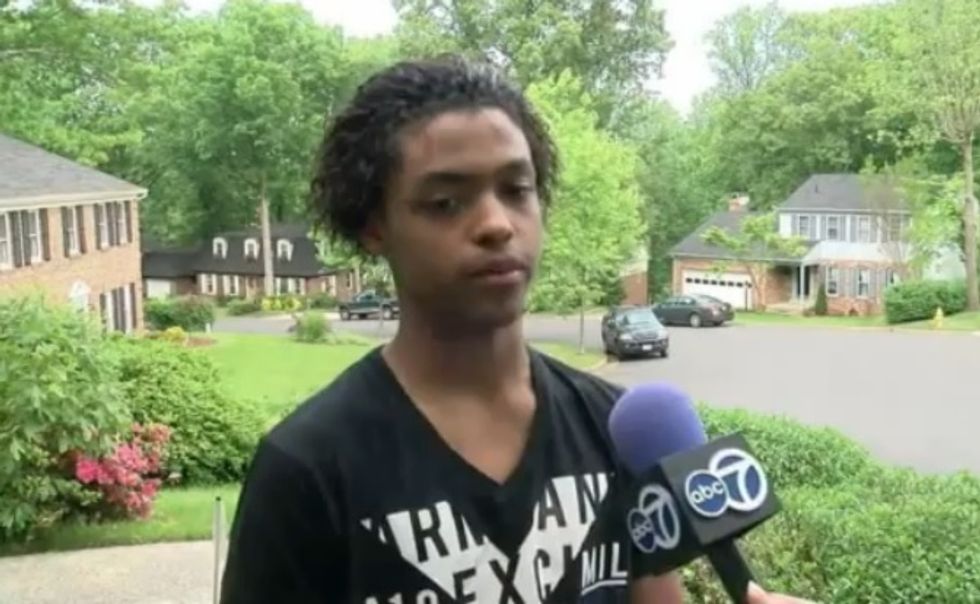 You can tell he's a thug from a shady neighborhood. Just look at all those shade trees.

A vigilant Prince William County police officer's efforts to keep a junior high schooler from creating mayhem and disorder is not getting proper credit; instead, the juvenile delinquent's mom seems to think there's something wrong with handcuffing a middle school kid, suspending him from school, and charging him with larceny for "stealing" a 65-cent carton of milk -- especially since the kid, Ryan Turk, was entitled to a free carton of milk to go with his free school lunch. WJLA-TV has the details on this latest incident of a cop being unjustly accused in the arrest of a dangerous thug:

The situation began May 10 at Graham Park Middle School in Triangle when Ryan, according to his mother, went back to the lunch line to get his milk.

It was then, WJLA reported, a Prince William County Police Officer accused Ryan of stealing the milk.

Ryan then became disorderly, police said, and needed to be placed in handcuffs.

The teenager said he indeed pulled back from the officer.

"I yanked away from him I told him to get off of me because he's not my Dad," the middle school student said.

Be right back, having some misty watercolored memories of all middle schoolers ever, and also The Way We Were.

His mother, Shamise Turk, says Ryan was then taken to the principal's office and searched for drugs, because black kid + defiance = hopped up on goofballs and likely to murder someone. You know that those people's huge hulking bodies are murder weapons in themselves!

"Because he was fidgety, kept pulling on the strings of his pants, and laughing when we were trying to talk to him and just wouldn't talk," Shamise Turk said.

Obviously a career criminal in the making, taking milk that he was entitled to and then not going along quietly simply because he knew he was wrongly accused. Don't you know that you're only allowed to resist unjust government authority if you're a white rancher who's been illegally grazing cattle for 20 years, kid? Then you get to shoot anyone in your way, though only if they're a "federal officer," which is not a real cop at all. Where are the parents?

"This is ridiculous... this is beyond embarrassing... he's at home for 65 cents," Shamise Turk said. "I'm angry, I'm frustrated, I'm mad. It just went too far. They are charging him with larceny, which I don't have no understanding as to why he is being charged with larceny when he was entitled to that milk from the beginning."

Look lady, what part of "drinking milk while black" don't you understand? Police said the "larceny" charge was justified, because Ryan attempted to "conceal" the milk, which Ryan and his mother deny happened. How does she know he wasn't planning to mix it with Skittles, sweet tea, and cough syrup to make narcotics, huh? After all, the school already knows about his involvement with drugs!

The school spokesperson said Ryan was suspended for theft, being disrespectful and using his cell phone in school.

Appeals process? Even the school is full of political correctness. The cop saw him steal free milk, and that should be the end of it.

Meanwhile, all of the commenters on all the websites can't believe what a terrible parent you are, Shamise Turk, and why you haven't taught your son some basic respect for the law. Police officers' legitimate commands must always be obeyed immediately, no matter whether you think you have "rights." As one commenter wisely observed, this is how a life of crime starts: "Milk cartons today, cars and banks tomorow." Also, how can Ryan be on the free lunch program when the family was taped on the news in such a nice neighborhood? Did Obama buy his cell phone? Why does Ryan even have a cell phone if he's getting free lunches? How many tons of King Crab legs did you buy with your EBT card? Where's the father? Stealing milk, too? Or stealing milk in prison? Why is Ryan getting free lunch when you eat all that King Crab and let your son have a drug habit? You probably even have a refrigerator and a TV and furniture where you sit around all day watching TV, taking drugs, eating crab legs and free milk, doing voter fraud, converting to Islam, and then probably joining ISIS, damn you. Why was Ryan even taking milk -- aren't You People all lactose tolerant anyway? What is this country coming to? TRUMP 2016!!!!! BUILD THE WALL!!!!!!!

Ryan has been ordered to appear in Juvenile Court on the larceny charge, for stealing the free milk that he was entitled to take from the lunch line. We would suggest he be sentenced to read Catch-22 so he'll come to understand a thing or two about American Justice.