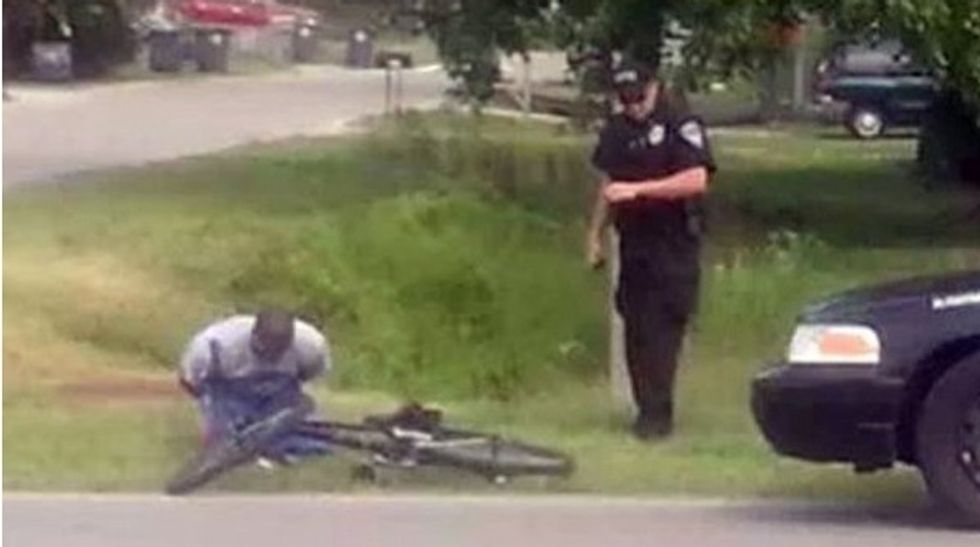 A firefighter in Evansville, Indiana,was nearly tased in the face Tuesday after police misinterpreted his friendly wave as giving them the finger. George Madison Jr. was riding his bicycle when a police car made a sudden left turn in front of him at an intersection. He says he raised his hand to wave because he knows many officers on the Evansville police force. He picked the wrong cop to wave at:

“The officer jumped out and says, ‘What are you doing throwing your hands up at us?’” Madison said. “He is talking to me as he is coming toward me. I tried to explain, but I couldn’t get a word in edgewise.”

What did he expect? When a white cop asks you a question, you aren't supposed to answer back, you're supposed to lie down and wait to be cuffed.

Madison says he reached for his cell phone to call Evansville Police Chief Billy Bolin and was told to drop the phone; when he hesitated, the cop grabbed his arm and then pulled a taser gun on him:

“It was literally maybe inches from my face,” the father of four said. “I immediately threw my hands in the air. What he asked me to do I was more than willing to do. I said ‘Please don’t hurt me.’ The next thing I know I’m laying down the ground and they cuffed me.”

“I remember looking down the barrel of a Taser, because [the officer] was gritting his teeth and saying, ‘Don’t make me pull this trigger.’”

A passing motorist who attends Madison's church (he's a youth pastor, too) recognized him and snapped the cellphone photo above. Once the police asked him where he worked, Madison says their attitude changed, and they eventually let him go without charging him.

The dispatcher's notes (PDF link) say that the officers stopped Madison after he "raised his right arm in an apparent aggravated manor" [sic] and that when the cops told him to put his phone away, he "postured up and pulled his hand back in an aggressive manor" [sic]. (Something clearly needs to be done about all these angry mansions in Evansville.)

"I don't mean to discredit George at all ... [but] we have to hear all sides and a lot of times both sides may have the same story but just from a different perspective."

So, yes, it's totally like Rashomon. We are just relieved that Mr. Madison is a firefighter and a youth pastor; had he been an ordinary black guy in a sweatshirt, he'd have no credibility at all. We're reminded of the Kilgore Trout story from Slaughterhouse-Five about the visitor from outer space who studied the Gospels:

But the Gospels actually taught this:

Before you kill somebody, make absolutely sure he isn’t well connected. So it goes.

The flaw in the Christ stories, said the visitor from outer space, was that Christ, who didn’t look like much, was actually the Son of the Most Powerful Being in the Universe. Readers understood that, so, when they came to the crucifixion, they naturally thought, and Rosewater read out loud again:

Oh, boy–they sure picked the wrong guy to lynch that time!

And that thought had a brother: “There are right people to lynch.” Who? People not well connected. So it goes.

Oh, boy -- they sure picked the wrong guy to tase this time!