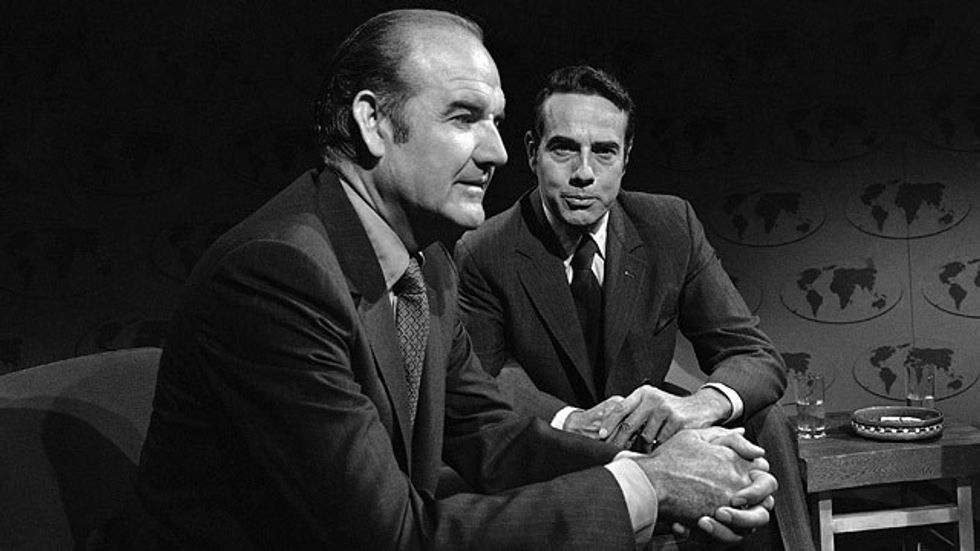 Here is anice remembrance of George McGovern from his friend, Bob Dole. ("BOB DOLE!") It is one of those pieces where old men talk about how things were so much better in their day, when after a long work sesh, Tip O'Neill and Ronald Reagan would get together, drink some Cosmos, and go bum-hunting. That's all well and good. Those hoboes aren't going to chase down and murder themselves! But buried in Dole's opinion-editorial whatsit is some disturbing news for Republicans: not only did Bob Dole ("BOB DOLE!") not try to murder the last living liberal, George McGovern, when he had the chance, but there used to be Republicans who tried to expand food stamps and school lunch. How will today's GOP go on, knowing that it is descended from Kenyan anticolonial socialist Ho Chi Minhs?

Blah blah blah, we both killed some Jerrys, yadda yadda yadda "BOB DOLE!" We would both come to understand that our most important commonality — the one that would unite us during and after our service on Capitol Hill — was our shared desire to eliminate hunger in this country and around the world. As colleagues in the 1970s on the Senate Hunger and Human Needs Committee, we worked together to reform the Food Stamp Program, expand the domestic school lunch program and establish the Special Supplemental Program for Women, Infants, and Children.

Beg pardon? Did Bob Dole ("BOB DOLE!") just say he helped establish WIC? And that like Bill Clinton was the first black president, Bob Dole would have been the first Food Stamp President? Oh, GOPpies, it gets worse.

More than a quarter-century later, with political ambitions long behind us, we joined together again. Soon after President Bill Clinton named George ambassador to the U.N. Food and Agriculture Organization in 1998, he called to ask for my help in strengthening global school feeding, nutrition and education programs. We jointly proposed a program to provide poor children with meals at schools in countries throughout Africa, Asia, Latin America and Eastern Europe. In 2000, President Clinton authorized a two-year pilot program based on our proposal, and in 2002, Congress passed and President George W. Bush signed into law the McGovern-Dole International Food for Education and Child Nutrition Program. Since its inception, the program has provided meals to 22 million children in 41 countries.