Bobby Jindal Announces He Will Not Be President-Elect, Because That Has A Hyphen In It 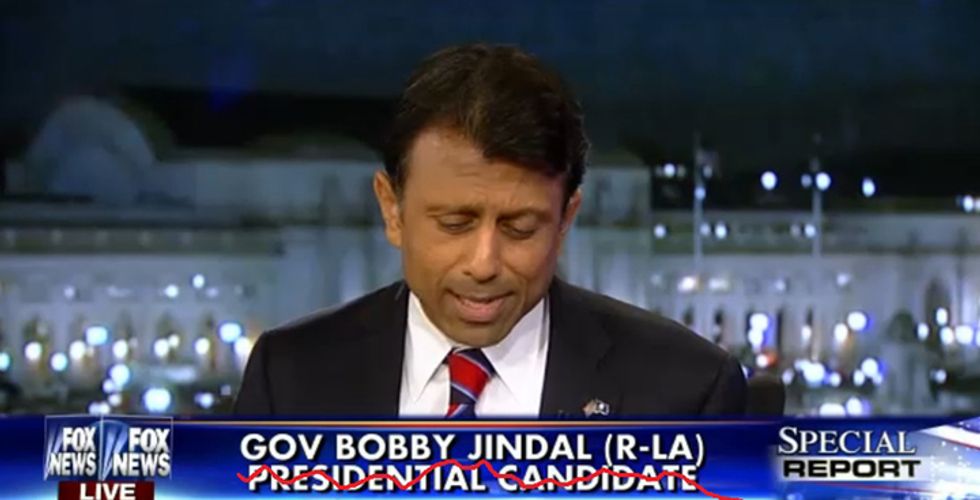 In some late-breaking news that every last man, woman, and goat in America has been predicting for months, Louisiana Gov. Bobby "Don't hyphenate me, bro" Jindal announced on Fox News that he will stop pretending he might be president one day.

We called it the day he announced his doomed candidacy, and we've been calling it ever since, as we've snickered to ourselves -- and you, dear readers -- about how nobody likes him. Seriously, literally, actually, and for reals, nobody. We hear his own mom won't even return his calls. (We made that up, but it's probably true, and who cares if it isn't? He can screw himself like he's been illegally screwing the womenfolk-people of Louisiana.)

Bobby Jindal sucks, as you know, because we've kept you up-to-date on all his sucking. He sucks on The Gays, The Science, The Chicks, The Muslims, The Immigrants, The Teen Nerds -- The All The Things, basically.

Also, he is a terrible garbage person who has said terrible things -- like demanding the father of the mass shooter in Oregon apologize for not being a Jindal-approved gun-lovin' parent. Bobby Jindal does not have a shred of humanity inside of him, maybe because it got exorcised out with the demons.

Jindal was never going to be president. He was never even going to make it to the Big Kids' Debate Table; that is how hard he sucks. He could barely get Donald Trump to say his name. And it's not as if he didn't try, desperately.

Bobby Jindal made some words with his mean little face, during his final interview ever, about how blah blah who cares, he is a jerk-faced jerk-hole full of jerk nuggets. He still hates Muslims, immigrants, the Constitution, and Barack Obama, whom he described as (not kidding, legit verbatim here) "a community organizer." That's Mr. Twice-Elected-To-The-Presidency Community Organizer to you, loser.

The election for Louisiana's next governor is this Saturday, Nov. 21, when Bobby's butt print will be replaced either by our favorite diapers-donning hooker-banging family values hypocrite, Sen. David Vitter, or a Democrat named John Bel Edwards, whose qualifications shouldn't even matter to you because he's not Vitter, and isn't that enough?

And then Bobby Jindal will disappear forever, and his Duck Dynasty bestie and preferred vice presidential candidate (god, how sad) Willie Robertson will "lose" his number, and we will all promptly forget to even miss him.