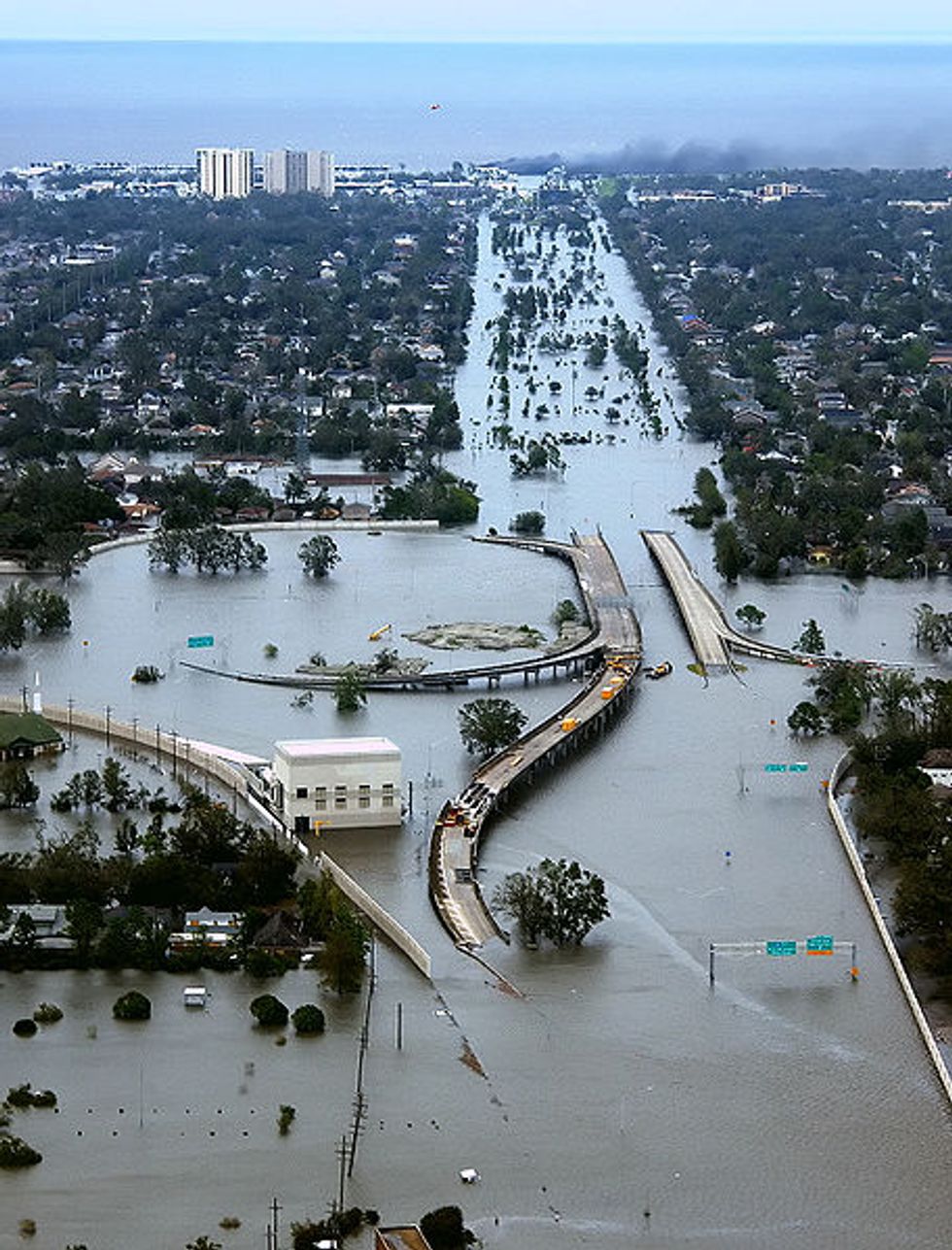 Big anniversary happening on Saturday! Ten years ago, Hurricane Katrina made landfall in Louisiana, and the storm and the levee breaches it caused altered the course of history for New Orleans and surrounding areas. And, as governor of Louisiana, Bobby Jindal knows the city is in danger again, this time from that foreigner president of ours. What if Obama gallivants into New Orleans and says, "Climate change is real," or "Science exists," or "Bobby Jindal is a fucking moron"? Something had to be done, so Jindal writed hisself a letter to the president, explaining that the topic of climate change makes him uncomfortable, so please do not say mean words like that:

There is a time and a place for politics, but this is not it.

It is therefore with disappointment that I read of the White House’s plans to make this visit part of a tour for your climate change agenda. Although I understand that your emphasis in New Orleans will – rightly – be on economic development, the temptation to stray into climate change politics should be resisted.

While you and others may be of the opinion that we can legislate away hurricanes with higher taxes, business regulations and EPA power grabs, that is not a view shared by many Louisianians.

I would ask you to respect this important time of remembrance by not inserting the divisive political agenda of liberal environmental activism.

How DARE the president do liberal environmental activism to Jindal like this? And in New Orleans, a city that doesn't even HAVE a climate!

So yeah, that mean President Obama is doing a big, dick-all-the-way-out "Climate Change Is Happening, To Your Mom" tour around the nation, and his speech in New Orleans, to commemorate the anniversary of Katrina, will surely address the subject.

And despite how Bobby Jindal doesn't believe in climate change, and also has the cock of Big Oil so far down his throat it tickles his prostate from the inside, both Big Oil and Mother Nature are doing a hell of a number on southern Louisiana. For one thing, oceans are getting warmer, and what gives hurricanes the boner juice they need to perform? Warm water, that's what.

A 2014 National Climate Assessment Report (released by the White House, probably to annoy Jindal) has a lot to say about just how fucked Louisiana might be in the near future. Big block quote here, packed full of science-y goodness:

“The southeastern region is exceptionally vulnerable to sea level rise, extreme heat events and decreased water availability,” said Kirsten Dow, a geography professor at the University of South Carolina and one of the authors of chapters in the report, during a telephonic news conference on the report. [...]

The report uses Hurricane Katrina as an example of the potential for national disruptions disruptions expected from future disasters. For instance, it includes a map showing how more than 800,000 Louisiana residents were displaced across the country by the storm, based on the zip codes where they requested federal emergency assistance.

Louisiana is especially sensitive to sea level rise, thanks to the coast’s already rapid subsidence rates. The state’s coastline has lost 1,880 square miles since the 1930s, and the state’s coastal Master Plan predicts that another 1,750 square miles could be lost by the end of the century, in part due to sea rise fueled by global warming.

IN PART fueled by global warming. The other IN PART is caused by Big Oil, hurray!

Here, watch this video from The Guardian, on what life is like for four residents from New Orleans and the surrounding wetlands after Katrina. Aside from how it's just a lovely piece to watch, and worth your time, two of the residents talk about how the sea level rise is directly affecting their lives:

These, and all the rest of the people in the region, are the ones Bobby Jindal is trying to "protect," because he's just too much of a Republican wingnut shitbag to actually care about what's happening to his own state.