Bobby Jindal Is BFFs With Some Duck Dynasty Guy, Let's All Vote For Him Now 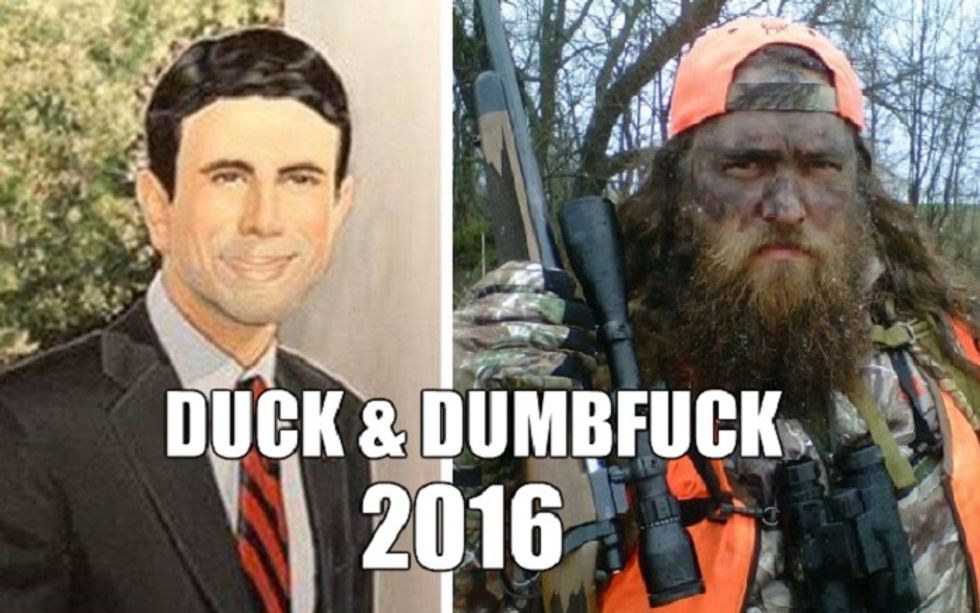 So much sexciting news in the wacky world of Republican presidential primaries! Ted Cruz is in, Rand Paul is in, and now Bobby Jindal ... well, he's still making up his mind about whether he'd like to one day be the question to a Jeopardy! also-ran answer, but at least he's got a great idea for a running mate: that dude from Duck Dynasty. No, not daddy Phil Robertson, who only resists the temptation to cut off your penis because the Bible tells him so. One of the prodigal sons (there are so many, they are practically the Duggars). The Louisiana governor is talking about his bestie, Willie Robertson, "icon" and "hero of many":

Is Jindal joking? Maaaaaaybe. But then, we figure he's always joking, because how could a guy who believes in exorcisms and creationism, but not volcano monitoring, cuz that's dumb "science," possibly expect to be taken seriously?

Obviously, we are all for this winning ticket. We'd love to see the whole Robertson clan out there, stumping with Gov. Jindal, teaching us 'bout how abortion is good or maybe not -- who knows? -- and how to do Bible sex the Robertson way and how to Cajun rub your meat (not a euphemism).

Of course, if Jindal decides to wimp out because the growing GOP field is so dad-jeans intimidating already, the Robertsons can still look forward to their Duck Dynasty musical, opening soon in a Vegas near you.

[The Des Moines Register via The New Civil Rights Movement]