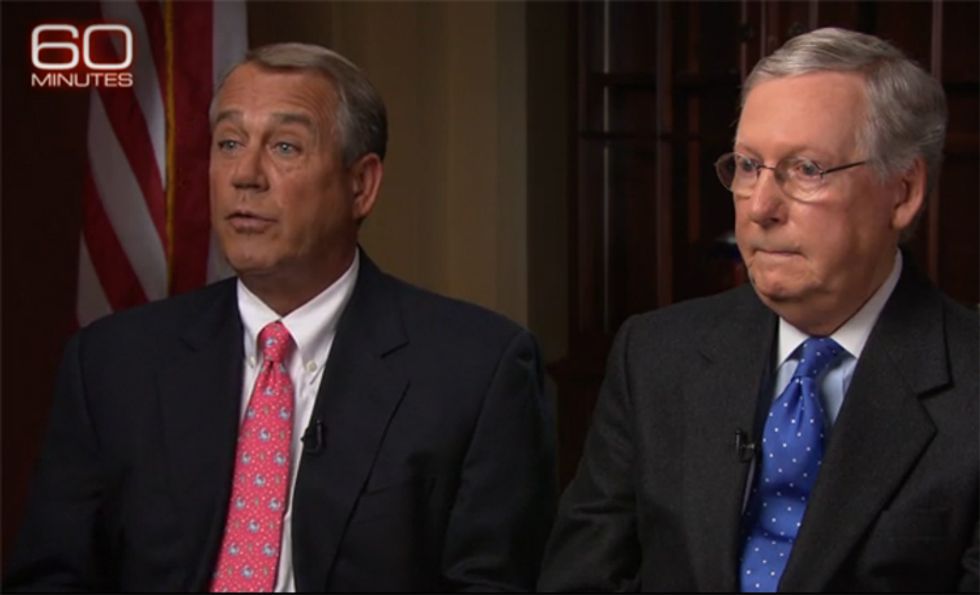 Senate Majority Leader Mitch McConnnell and Speaker of the House John Boehner went on the 60 Minute televisual informatical program Sunday to explain all the exciting plans the Republicans have for uprooting Obamacare and replacing it with something much better, except that the part where they actually said what the replacement would be kind of got left out. Asked to explain the GOP's Obamacare alternative, Boehner offered a clear-eyed vision of the past and how things might have been different, maybe:

Providing more access we could have done without taking control of the entire healthcare system. When you look at Obamacare, it’s a perfect example of what Washington does. It’s a one size fits all approach for the whole country all driven by Washington bureaucrats. I’ll bet they’ve hired tens of thousands of people between the IRS and over at Health and Human Services just to run this. All of the decisions, all of the rules decided by Washington. We have a wide, diverse country, and I just think it’s time for us to look at this differently. For those who don’t have access to affordable health insurance. Helping those at the bottom I think we’re all for it, but we don’t need Washington to ruin the best health delivery system that the world has ever known.

You see? That should fix things just fine, apart from not actually including "a plan." But Washington sure is terrible at getting anything done, because there's no one-size-fits-all solution, also the IRS is very very bad! So let's stop ruining the 37th greatest healthcare system in the world, OK? Host Scott Pelley tried again, asking what exactly that Republican plan is. This time, Boehner got down to the nitty and explained exactly how it would work:

We’re, we’re working on this. Having discussions amongst our members, got a lot of divergent views about how best to go back to a doctor/patient relationship that’s revered, about rewarding medical professionals as opposed to all those rules that are coming down and frankly driving doctors out of the system.

That's reassuring -- we gather that the Republican plan will have something to do with people going to see doctors, then. And they will be in a system that doesn't have rules. Or at least not bad rules.

Pelley tried again, noting that he'd heard a lot about what Republicans are against, but nothing about what they're for. That really is a silly question for a man who has said that the job of lawmakers is not to make laws, but to repeal them.

McConnell jumped in to point out more of what Republicans are against, noting that there are a whole lot of people who still don't have health care (thanks in part to Republican governors who refuse to expand Medicaid, though he didn't mention that), and saying that if he had his druthers, he'd rip Obamacare out "root and branch" -- like some great president known for brush-clearing on his ranch -- but that with Barack Obama still in the White House, that's going to be awfully hard to do.

Pelley summed up: "You don't have an alternative," and Boehner said that they did too, like the decade-old idea of letting people buy insurance across state lines and passing malpractice reform, which would surely make health insurance so plentiful that insurers might have to pay people to take it. Also, maybe let states run their own exchanges, which they would surely do if only a Republican were president. And did he mention selling insurance across state lines? That would be huge! Oh, and malpractice reform. Also, Benghazi.