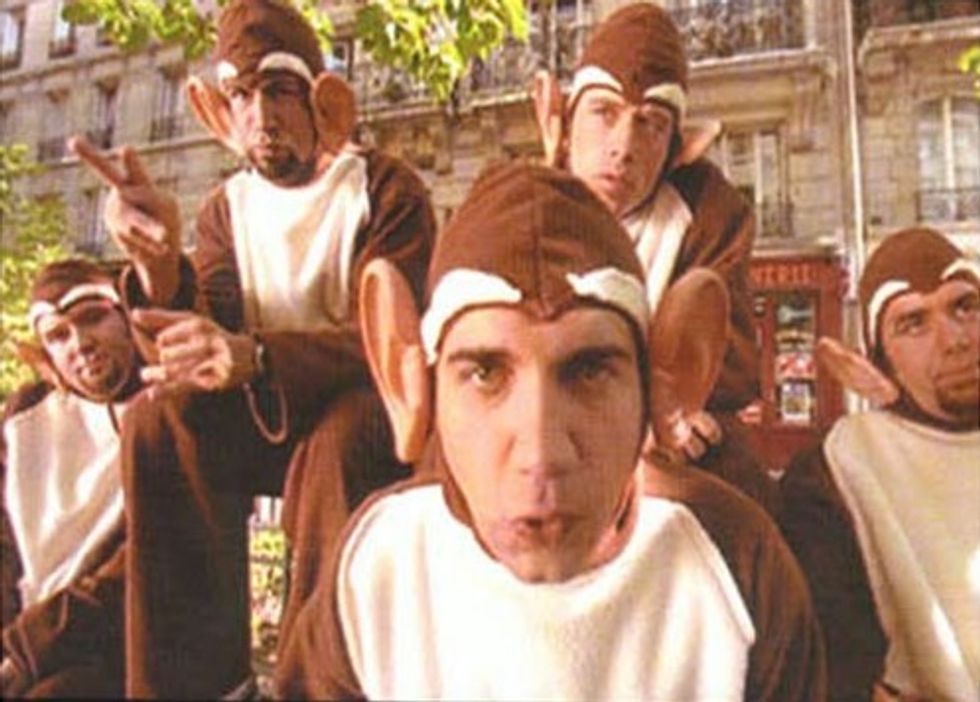 Oh, golly, you know sometimes Yr Doktor Zoom goes a few weeks or more without encountering the odd mental oscillations of Wonkette frenemy Bradlee Dean, who keeps failing to sue us so we can get all his money. We still think that Jim Hoft richly deserves his title of Stupidest Man on the Internet, but Bradlee Dean is a close second, and since he mostly works the rightwing podcast & "radio" circuit -- some of it's broadcast on AM and shortwavesomewhere -- we can't just read Bradlee, we have to listen to him. Which is all by way of saying that every time we hear this man speak, we can feel our brain atrophying. And so it was with some trepidation that we listened to most of Dean's half-hour interview on the "TruNews" End Times podcast from Thursday, to see if he ever elaborated on his assertion that in New York City, liberal teachers are now "teaching kids bestiality in public schools." We figured that if he had, Right Wing Watch would have quoted it, because how would you not? And of course, he never explained it at all. Oh, but there was other stuff, too, and we will bring you the worst of it so you needn't damage your own headparts listening to it yourself.

So, as far as context goes, the conversation was mostly about public schools and how God has been banished from them, which is just plain logic. And within the first 30 seconds of the interview, Dean was just flat out lying (or not knowing what words mean, which you could make a case for), saying that when the Supreme Court "took God out of the schools," they created an "unconstitutional oligarchy," because only 3% of Americans then ruled the rest. Who were those 3%? We'll assume he means he saw some estimate of the number of atheists in 1961, as if only atheists supported separation of church and state... but who knows?

In any case, something has to be done about the terrible state of affairs in America, because there are all these completely lawless liberals everywhere, and as nutball podcast host David Berman says, "This is a demonic problem, isn't it, my friend?" And Dean is off and running. Here's a nice serving of word salad for you all to try and parse:

But going back to the schools again, you're dealing with an educational system -- National Education Association -- they're so demoralized [sic], they're so irrational that now they have something called the homosexual caucus; that wasn't good enough, now they have a drag queen caucus. In New York City, they're teaching kids bestiality in public schools.

Now, you might think that after a statement like that, Berman would at least ask for an example, like what animals the children are learning to fuck, but nahh, Berman was more interested in talking about why "left" and "right" are not useful terms, because the only good political position is being for the Constitution or something. (We're going to guess maybe it had something to do with this story about an Albee play in an Arizona high school? Or John Nolte's worries about walrusfucking?)

The two continued to natter on about god knows what for a while, with Dean explaining that the Tenth Amendment bars government from running schools (we'll be generous and assume he means the federal government can't give aid to schools?), and the schools are just like Mao, Stalin, and Hitler rolled into one. But we eventually stopped focusing on content -- you've heard all this Oppressed Christian bullshit before, and you'll hear it again -- and we let the dissonant music of Bradlee Dean's patter wash over us. He seems physically incapable of saying only the president's first and last names, and he can't toss out one of his memorized Great American quotes without the formulation "as _____ so rightly said." And now, having listened to him for almost a half hour, we can safely say that we have been pithed like a frog in Bio 101. We're ready to get our drink on now.

Still, we wish we knew more about these New York bestiality classes...