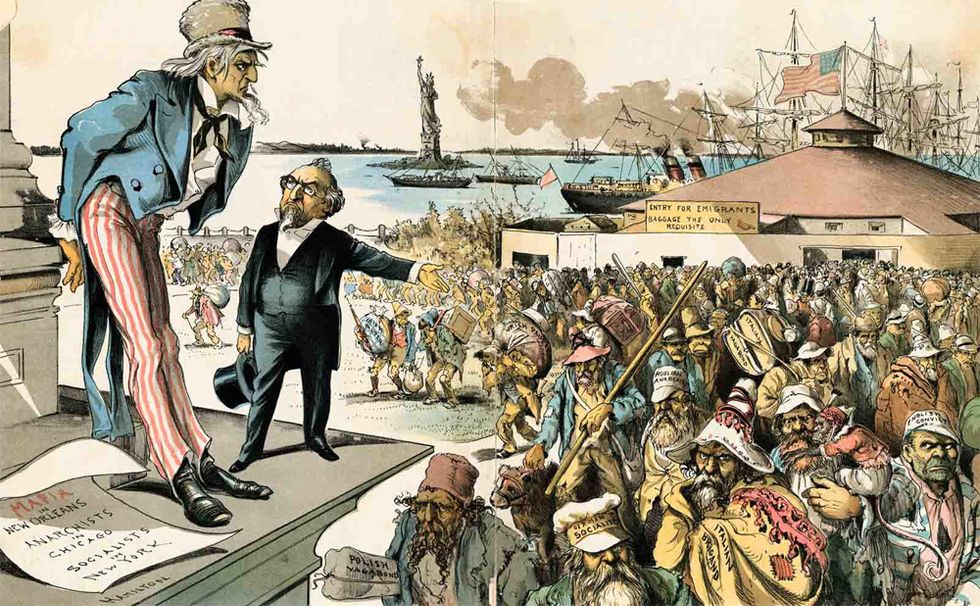 Judge to Uncle Sam: 'If Immigration was properly Restricted you would no longer be troubled with Anarchy, Socialism, the Mafia and such kindred evils!' (1891)

Just when America's on the verge of helping refugees, you can count on rightwing militias to cry that the filthy foreigners are going to be a bunch of terrorists. Take the brave patriots (please!) of "III% Idaho," a gang of paramilitary loons who have been protesting a community college's refugee center, warning that it's a portal for Islamic radicals who are of course going to Kill Us All. Sunday, the group gathered at the Idaho Capitol, complete with American flags, flak jackets, and dire warnings that the Gem State will be overrun by Sharia Law:

“Now, refugees coming from Islamic hotbeds of terrorism, don’t you think that poses a threat to Idaho communities?” shouted III% of Idaho spokesman Chris McIntire into a bullhorn.

The demonstration was part of an ongoing fear-fest from the "III Percenters," named for the mythical portion of colonists who took up arms in the American Revolution and will lead the next one any minute now. The group has been raging against a program run by the College of Southern Idaho in Twin Falls, which has been helping refugees resettle in Idaho for over 30 years, but has recently become the focus of panicky Islamophobia. In late October, the group held a protest outside the center that attracted more than 200 marchers, many carrying guns because they were absolutely certain ISIS militants were going to come roaring out of the sagebrush.

At that event, the head of the III Percenters demanded the refugee program be shut down, as it poses a threat to national security:

“We’re not against refugees or helping people,” said Brandon Curtiss, the president of the Three Percent. “However there have been issues, like the Boise bomber who was placed through the program, that shows that there are problems with the program.”

For what it's worth, there haven't been any bombs going off in Boise, although a Boise man from Uzbekistan was convicted on terrorism charges in July in one of those great FBI sting operations where a paid informant helps create a terrorism plot that otherwise wouldn't have existed. The case is under appeal. So yeah, terrorists everywhere.

And just how scary is the center's flood of refugees? As the Idaho State Journal reports:

In October, the center in Twin Falls is expecting 22 refugees. They’ll come from the Democratic Republic of Congo, Sudan, Iran, Iraq and Eritrea, but none from Syria, according to Zeze Rwasama, the director of CSI’s refugee center.

[contextly_sidebar id="2OXg05JUvuHGW9VHGdFRM2TD57MIoqzt"]A whole 22 refugees in a month! Good god, Martha, hide the children, it's an invasion! Approximately 300 Syrian refugees are likely to be resettled in Idaho over the next year. They'll all face extensive State Department vetting, through a process that might best be described as Kafkaesque. But there's no doubt about it: Idaho's wingnuts are terrified, and that's what matters.

For what it's worth, people who don't spend all their time wearing camouflage and reading InfoWars don't seem to be panicking:

Jan Reeves, director of the Idaho Office of Refugees -- which oversees the state’s four resettlement agencies (including CSI’s) -- explained to the Idaho Statesman that it’s difficult to assure people about security because the checks on refugees are confidential.

“It’s hard to convince people that they’re adequate and will prevent the wrong people from having access to the refugee program without being able to be specific about what those checks entail,” he said.

Maybe the III Percenters would be reassured if they could waterboard some of the refugees themselves, to be sure. At the October march at the CSI Refugee Center, Chris McIntire whined that refugees are taking up valuable tax dollars that could otherwise be spent on programs for Real Americans (never mind that rightwingers would also oppose those programs):

The current refugee program has a lot of momentum, but it is momentum based off false information. There has been an increase of violence in refugees in Europe and we don’t want that happening here. Another issue is the tax dollars they use. There are veterans and students here that need assistance and this is tax dollars being shifted away from them.

At Sunday's rally, McIntire also warned that the refugees would of course be full of ISIS infiltrators, just because he knows:

“Now, there are many terrorist organizations out there who have stated numerous times that they will manipulate the refugee crisis to spread radical Islam,” McIntire told the crowd ... “We are seeing this in Europe. We have seen it for the past several months, where refugees are rioting in the streets, they are waving Islamic flags, they are praying to Allah, they are demanding Sharia law, which includes the second-class treatment of women!”

The III Percenters take pains to point out they are not racist, of course. Heck, they even sound like a bunch of feminists there, don't they?

Across Jefferson Street from the Capitol building, a small crowd of counter-demonstrators organized by the Boise Interfaith Alliance carried a banner that read "We Welcome All Refugees to Boise." One woman in that group told SPLC's Hatewatch:

I just couldn’t believe that these people were claiming that these refugees who are fleeing from ISIS were actually ISIS terrorists ...

I’m glad to see people stand up [to] that kind of insanity.

We're hopeful the loonies won't win. The Refugee Center has considerable local support, and Boise has a thriving refugee community (Kid Zoom volunteered at a program that teaches English to refugees, even), so we're fairly sure our modern Know-Nothings won't keep us from having nice things, like diversity.

But the wingnuts sure as hell are terrified, which suggests to us that for at least some Idahoans, the terrorists have already won.