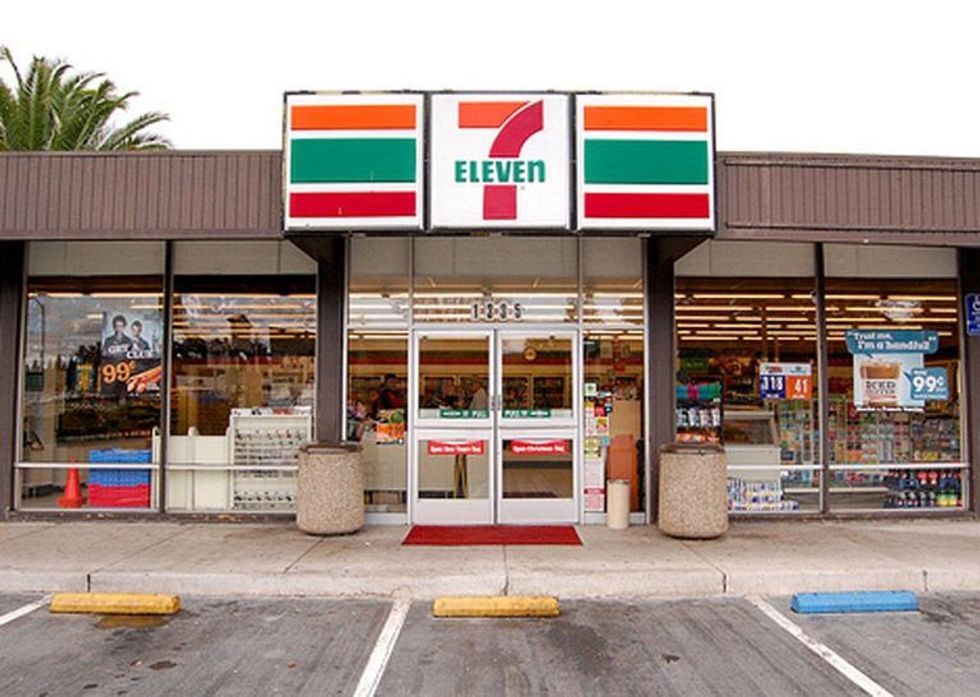 It is not always easy being a men's right activist. In a world where over 95% of Fortune 500 CEOs are men, and where 80% of congress is made up of men, it is sometimes difficult to argue that men are truly getting the short end of the stick. But, if you look really, really hard, and squint, you can occasionally see examples of true injustice.

Doug Mortimer of A Voice For Men has found such an injustice. And it is coming from none other than his local 7-Eleven. What has 7-Eleven done to trigger this outrage? Have they decided to only sell Slurpees to women? Are they posting "BAN MEN" signs outside their doors? No, they are engaging in the cruelest form of misandry known to, well, a certain type of men. VIRTUE-SIGNALING.

Doug, whose author bio states that he was a MGTOW before being a MGTOW was cool, is very upset because 7-Eleven is holding a contest to give away a 7-Eleven franchise to a worthy aspiring entrepreneur. The problem? The contest is for LADY entrepreneurs only, and thus a violation of his civil rights as a man.

So if you’ve always suspected that having a 7-Eleven franchise contract was a license to print money, here’s your chance to find out. Sure, the competition will be stiff, but there’s always a last man standing.

Whoops! Silly me! I misspoke. You see, this contest is open to women only! I should have said “last woman standing.” Unless she lives in Hawaii, North Dakota, or South Dakota, where this sort of contest is taboo.

Come to think of it, isn’t a woman-only contest a violation of men’s civil rights? Wouldn’t a male franchise applicant have grounds for a lawsuit? Suppose it’s a man who says he identifies as a female? For a potential prize of $190,000, it might be worth taking a few hormone shots.

Now, if he had stuck to this argument and this argument alone, he might have some semblance of a point. I would certainly hope that the contest is in fact open to trans women as well. Although he'd then have to argue against this giant list of scholarships that are only for men as well, and that could get awkward on a men's rights site.

But no, he did not do that.

The contest itself is a response to the statistic that only one-third of franchises in the U.S. are owned by women, and is part of a larger effort to increase their own number of female-owned franchises. Doug is very mad about that, because if more women wanted to own franchises, then they would just go ahead and do so.

Sorry I can’t give you a definite percentage. The correct answer is whatever it works out to be, anywhere from 0 to 100%.

For what it is worth, 7-11 also has a program to increase franchise ownership among veterans, and has previously held the exact same contest to achieve that aim. Would Doug be as upset about that initiative? Would he say "Oh, well if veterans wanted to own 7-Eleven franchises, they would just go and buy them?" Probably not!

His real problem, of course, is with the way the contest is being framed to "flatter" women. Which, you must understand, is a terrible, terrible thing in MRA world.

According to the contest web site (womensfranchisegiveaway.com), they’re looking for “a fearless, determined woman.” Funny thing, but the words “fearless” and “determined” generally don’t come to mind when I ponder the management of a 7-Eleven store. But when you’re trying to attract women, ya gotta make ‘em feel special. Just ask any PUA. The contest slogan, by the way, is “Yes W.E. Will” (W.E. stands for Women Entrepreneurs).

In fact, the web site includes a one-minute video (“I Am Empowered”) with a rainbow coalition of egocentric women (“I am a leader,” “I am powerful,” I can do anything,” “I am creative,” etc.). The video ends with each woman proudly stating “I am a franchisee.” Wow! Girls, you are so special!

Well, unless you’ve been cryogenically frozen the last decade or so, you know that corporate virtue signaling vis-à-vis female empowerment has become a cliche of corporatespeak. Almost every company has assigned some corporate cuck to assert that it’s high time society tapped into all that dormant female talent. A petroleum geologist who’s just discovered the biggest oil field since Spindletop couldn’t be more upbeat.

As all proper MRAs know, there is no such thing as dormant female talent. It is all a cruel hoax meant to take power away from deserving men.

If that were not cruel enough, 7-Eleven has even gone so far as to hire a Manager of Diversity Recruiting, when Doug Mortimer is pretty certain they are already diverse enough.

If 7-Eleven feels it necessary to have a diversity officer, then no organization on the planet is immune. I think this new position will actually be a Manager of Female Recruiting, but you can’t come right out and call it that. Kissing women’s collective ass is commonplace these days, but when 7-Eleven does so, the word “Slurpee” comes to mind.

But Doug Mortimer will not stand for this ass-kissing! He is now declaring a boycott of 7-Eleven, in order to challenge the erasure of men from the convenience store business.

That’s one way to make sure pop stays in the picture.

So, if you're keeping track here -- we're going from one little contest for prospective female franchise owners straight to 7-Eleven is making their convenience stores for LADIES ONLY and kicking "pop" out of the picture to make room for them.

[A Voice For Men]