BREAKING: Cop Actually Stopped Other Cops From Beating Guy Up! (Then Got Fired.) 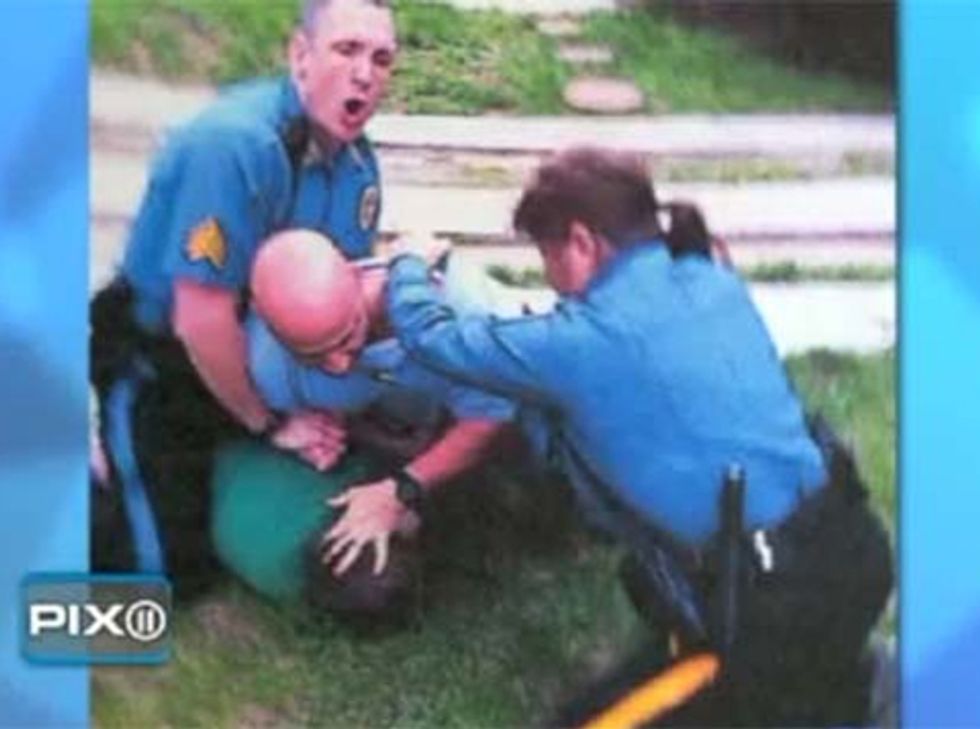 It took a couple of years, but there's finally been a bit of justice done in Bogota, New Jersey, where a judge has ordered the police department to reinstate, with back pay, Regina Tasca, a genuinely good cop who was fired in 2012 after stopping two fellow officers, who were fellows, from beating the living crap out of a mentally ill man who only needed to be taken to a hospital. Instead of getting a commendation for excellence in serving the community, Tasca was suspended and ultimately fired for being "psychologically unfit." Here's what happened back in 2012:

The black-and-white tape captures it all -- a mother, Tara, screaming for police to stop punching her son on their front lawn. She had called to have her emotionally disturbed son Kyle taken to the hospital. Bogota police responded while waiting for the ambulance. Tasca was the sole officer on the road that day, so she called for back-up according to protocol. Ridgefield Park police then sent two officers. Tasca had just completed her state-mandated training for working with emotionally disturbed citizens.

As the videotape begins, you can hear Tasca requesting that the ambulance be sent with no lights, no siren -- no need to upset Kyle unnecessarily. If you can stomach watching the tape, it's pretty incredible. Kyle's upset, refusing to go to the hospital, and Tasca is doing her job, talking to him, de-escalating the situation. And then, because obviously the little lady cop who just completed training on dealing with mentally ill citizens is not Tuff Enough, the backup officer tackles Kyle and everything goes to hell.

And yes, it's Tasca who got fired for breaking up the beatdown. You see, she was a troublemaker, having complained to the higher-ups about harassment on the job, so it was easier, all in all, to just get rid of her for being a pain in the ass. To move that process along, one of the other cops on the scene and Tasca's boss lied in their reports about the incident:

During her hearing to get her job back, the attacking officer, from neighboring Ridgefield Park Police, Sgt. Joseph Rella, admitted to covering up punching the victim. He also admitted to lying about his training in dealing with emotionally disturbed people, and violating protocol with his tackle and punch.

Rella never faced any discipline for his brutal actions that day.

Tasca’s boss, Captain Jim Sepp, also admitted to lying in his report to get her fired. He failed to interview witnesses, twisted quotes from Tasca and destroyed his notes used to make his report.

Sepp never faced any discipline for lying to get a good cop fired.

No word yet on how Eric Holder has encouraged lawlessness by not allowing cops to beat mentally ill people up, but we suppose Fox will get to that eventually.

In addition to the lying cops, Judge Rachelle Harz found that the then-mayor of Bogota, Pat McHale, and then-councilman Tito Jackson should have recused themselves from the disciplinary action against Tasca because they both had conflicts of interest. Jackson was a close friend of Captain Sepp, and Mayor McHale was being investigated for a DWI by Sepp, and may have wanted to look like he was on Sepp's side in the action against Tasca.

The city may have gone just a wee bit overboard, though: After firing Tasca, they also sued her to recover $152,000 in salary between her suspension and her dismissal. She countersued, charging wrongful dismissal, and won. There are eight additional charges in her suit against the city, including "allegations of harassment, retaliation and discrimination." At the time of her firing, Tasca was Bogota's first and only female officer and she also believes she was singled out for retaliation because she's gay.

Sorry, taxpayers of Bogota, but there's a really good Free Market Libertarian message about civil rights here: Don't hire assholes to run your city and police department, and you're a hell of a lot less likely to get sued.

And to Regina Tasca, welcome back to the police force. We need more cops like you. Any interest in being cloned?