BREAKING: George Bush Never Lied About WMDs, Was Gullible Idiot All Along 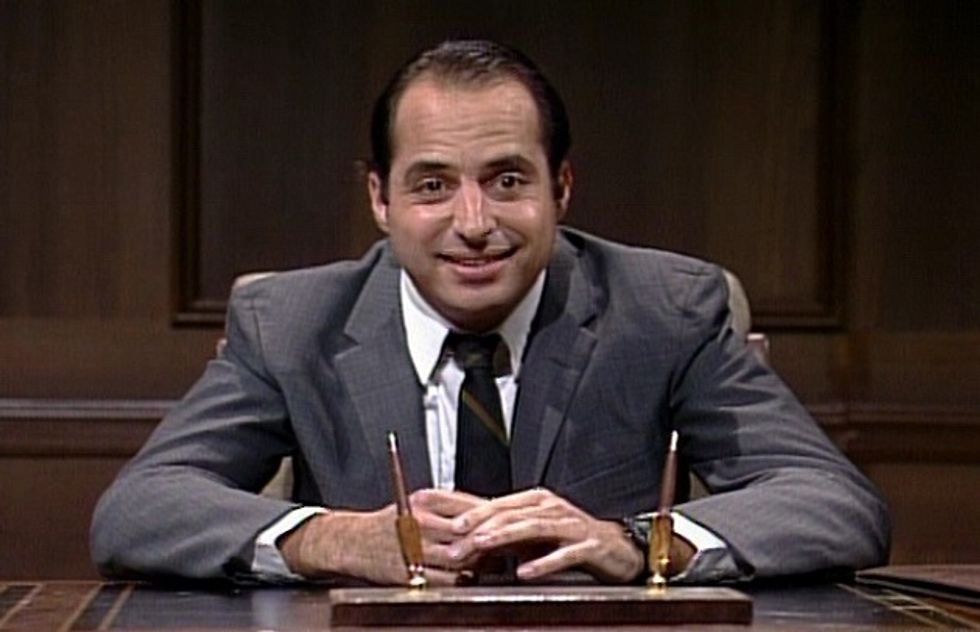 Far be it from us to argue with one of the esteemed legal minds responsible for exonerating Oliver North, but this editorial by Judge Laurence Silberman arguing against the proposition that George W. Bush lied the country into war with Iraq is some rank garbage. Plus it puts us on the same side of an issue as human thumb Ron Fournier, which is not the way we want to begin our Monday.

Now, anyone with half a brain and a working knowledge of recent history may recognize the words “Bush lied us into war with Iraq” as shorthand for the complex series of intelligence manipulation, public relations spin, hubris, ideological dogma, militaristic chest-thumping, and imperialistic self-righteousness that led into our nation’s disastrous adventure in the desert. Not Laurence Silberman, though. Because back in 2004-2005, he co-chaired a commission -- his name was on it and everything! -- that was directed “to evaluate the intelligence community’s determination that Saddam Hussein possessed WMD.”

In other words, a Washington insider tasked with closing the Bush administration’s barn door after the horses got out. Sounds stellar.

The thrust of Silberman’s argument revolves around his examination of the 2002 National Intelligence Estimate. Here is what he has to say about that document:

Oh, that would be the infamous 2002 NIE that was hotly debated and easily the most controversial intelligence estimate ever produced? The one that was written hastily, under pressure and despite protests from some in the intelligence community that the information was not being thoroughly vetted? The one that members of the Bush administration were accused of pushing to include data that would fit a preconceived endpoint where the country found justification for invading Iraq? That 2002 NIE?

But don’t take the word of a mommyblog post being written by a blogger still in his pajamas at ten in the morning, Judge Silberman! Here, let’s look at what people actually involved in the production of that NIE had to say to Frontline in 2006.

Here is David Kay, a former weapons inspector who was part of the Iraq Study Group, which went to Iraq after the invasion to find the alleged WMD.

Here is Sen. Bob Graham of Florida, who was at the time the chair of the Senate Intelligence Committee and had to actually order the intelligence community to produce an NIE, because the Bush administration really didn’t wanna:

Well, The Washington Post reported subsequent to all of this that in the late spring of 2002, the White House had called down a number of CIA professionals and told them that they wanted a document which could be used to convince the American people that the threat from Iraq was sufficiently serious that that should be our first priority. […]

[I]t says to me that the decision had been made that we're going to go to war with Iraq; all of this other [talk] was just window dressing, and that the intelligence community was being used as almost a public relations operation to validate the war against Saddam Hussein.

Pretty damning! Need more? You can read all sorts of comments about the NIE, which included the long-debunked story of Saddam Hussein trying to buy yellowcake uranium in Niger, right here. Didn’t take much Googling at all.

Recall that the head of the intelligence community, Central Intelligence Agency Director George Tenet, famously told the president that the proposition that Iraq possessed WMD was “a slam dunk.”

And here is Melvin Goodman, a former intelligence analyst for the CIA and the State Department:

The fact of the matter is, the CIA didn't want to produce one. The White House didn't want one because they didn't want to allow any venting of whatever opposition there was to what they wanted to be the conventional wisdom on weapons of mass destruction. [...]

So three or four key people were picked to write this estimate that was a fraud; I don't know how else to describe that National Intelligence Estimate.

Silberman also says of his commission,

You must have not been looking very hard, then.

Maybe George Bush didn’t lie, though. Maybe he was too dumb and incompetent a president to press his subordinates to get him accurate information before making a momentous and world-changing decision about invading Iraq, and subsequently believed whatever bullshit they put in front of him. In which case, Silberman’s column turns on the very fine distinction of whether Bush lied on purpose, or lied because he was a Muppet with Dick Cheney’s arm buried shoulder-deep in his ass.

We don’t think that’s any better -- actually we think it's worse than being venal and smart enough to flat-out lie -- but whatever keeps your Republican Party membership in good standing.