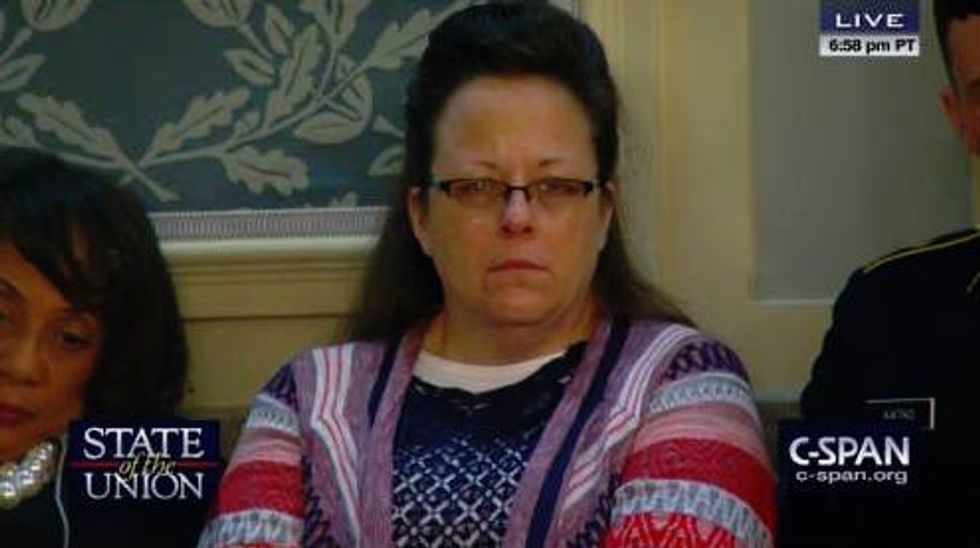 Attention, please! Important journalism update! As we all know, the most important news of the week -- if not the whole year or the whole EVER! -- is that Kim Davis, the gay-hatin' quadruple-married ex-whore-slash-clerk of Rowan County, Kentucky, sneaked her way into the State of the Union on Tuesday night. Don't you just hate when you accidentally invite a bunch of bigots to be your special guests at the State of the Union, Ohio Rep. Jim Jordan (R-Dumbass)? So awkward!

While we have already regaled you with the inside-baseball-below-the-beltway nitty gritty of what Republican leaders thought about the speech (hated it, duh), you know you've been holding your breath waiting for the crucial Kim Davis Hot Take, and lucky for you, POLITICO is ON IT:

Correction: An earlier version of this story quoted Davis as saying, "It was good," in reference to Obama's speech.

OK, so maybe POLITICO wasn't exactly ON IT at first, but it has corrected the error it no doubt regrets, so here it is, your all-important must-read review of the president's address, according to Kim Davis:

“It was a speech,” Davis told Agence France-Press in a quick interview after the event that was partially drowned out by noise from the crowd.

That is some swell journalisming if we have ever seen it. Pulitzers all around.