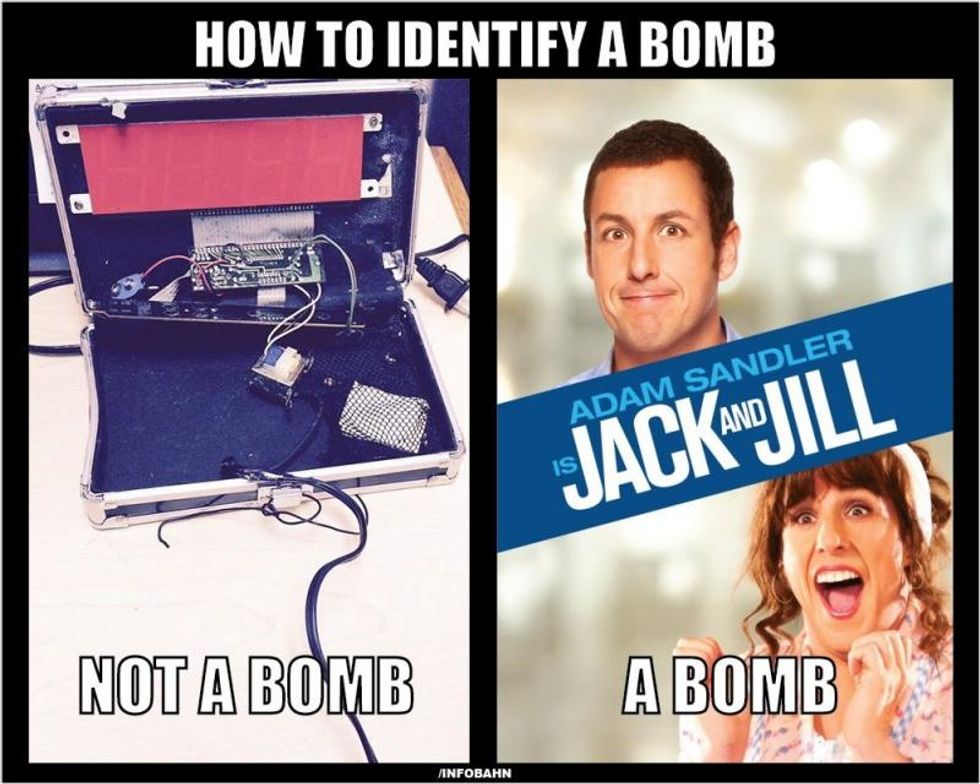 The Wingnuttosphere has spent a fair chunk of the weekend getting very exercised about a post from a weekly Buffalo newspaper Thursday that "exposed" -- with the breathless excitement of the best investigative journalism -- the True Facts about 14-year-old Ahmed Mohamed and the homemade clock that he was arrested for building. It turns out Ahmed didn't create the clock out of spare parts and his own innate genius with electronics; rather, he took the guts of a manufactured alarm clock out of its case and reassembled them inside a pencil case (still being described on some rightwing sites as a "suitcase" or "briefcase," although the actual dimensions of the case are 8.5 inches by 5 inches by 2 inches). Therefore, all of Ahmed's claims that he had "built" a clock -- and worse, his references to the thing as an "invention" -- are proven to be filthy lies, probably part of a Muslim plot to make the Irving, Texas, high school and police look like bigots and maybe even to enrich the family by creating unwarranted sympathy for the young would-be terrorist. Therefore, Barack Obama must immediately rescind his White House invitation to Ahmed, everyone who was nice to Ahmed must immediately withdraw their offers of campus tours and geek toys, and liberals must admit they were wrong, the Right is right, and eternal suspicion of Muslim teenagers is merely good sense.

Righty blogs have been howling over the "discovery" that Ahmed's clock is a "fraud." The Gateway Pundit crowed, "Hoax Exposed: Muslim Student Ahmed Mohamed’s ‘Briefcase Clock’ is 1980s Digital Alarm Clock." The RightScoop exclaimed, "WE’VE BEEN HAD!! AHMED DIDN’T EVEN MAKE THAT CLOCK!!" And even Richard Dawkins decided Ahmed was a big dummy, since he didn't really "invent" anything. So what was his REAL motive, huh????

We'll give Artvoice writer "Anthony" -- no last name given, though he identifies himself as having an "engineering degree" -- credit for a pretty good job of figuring out where the clock guts came from. He notes that the circuit board looks like something from the late '70s or early '80s and points out that there's no way a kid built it himself, since it has a manufacturer's silk-screened logos; eventually, with some corrections from a reader, the source clock is identified as an early-'80s product: "Amhed’s clock was invented, and built, by Micronta, a Radio Shack subsidary. Catalog number 63 756."

Nice detective work! Unfortunately, from there, "Anthony" goes off into a bunch of speculation about what must have really happened:

So there you have it folks, Ahmed Mohamad did not invent, nor build a clock. He took apart an existing clock, and transplanted the guts into a pencil box, and claimed it was his own creation. It all seems really fishy to me.

If we accept the story about “inventing” an alarm clock is made up, as I think I’ve made a pretty good case for, it’s fair to wonder what other parts of the story might be made up, not reported factually by the media, or at least, exaggerated.

After "Anthony" offers a brief disclaimer that his goal isn't "to pick on the poor kid," he immediately starts picking on him, deciding that there had to be something suspicious about Ahmed's decision to house the clock in something that looked like a small briefcase (maybe it's what he had on hand?), and finding deception in his after-the-fact description of having wrapped the clock with a cable so it "wouldn't look suspicious." AHA! "Anthony" pounces: "why would 'looking suspicious' have even crossed his mind before this whole event unfolded, if he was truly showing off a hobby project"? We're guessing that's because he's talking about it after his engineering teacher had told him not to show it to other teachers, and after he'd been arrested and accused of building a hoax bomb, maybe.

Because, is it possible, that maybe, just maybe, this was actually a hoax bomb? A silly prank that was taken the wrong way? That the media then ran with, and everyone else got carried away? Maybe there wasn’t even any racial or religious bias on the parts of the teachers and police.

I don’t know any of these things. But I’m intellectually mature enough to admit I don’t know, and to also be OK with that. I don’t feel a need to take the first exit to conclusionville. But I do like to find facts where I can, and prefer to let them lead me to conclusions, rather than a knee jerk judgement based on a headline or sound bite.

For a guy who wants to stick to the facts, he sure offers a lot of conjectures. He bloviates some more about how this is probably all just a hoax, an overreaction by social justice warriors who see victims of discrimination everywhere, and we've all been played for fools by the Big Media.

Rightwing blogs have gone even further, speculating that since Ahmed's father is active in anti-Islamophobia groups, then obviously the whole event was planned from the start, and maybe Ahmed didn't even make the clock himself because he's too dumb and his father planned the whole thing just to make Muslims look like innocent victims. Or MAYBE this was a "dry run" for a REAL bomb. Now that The Muslims know that the school wasn't evacuated, they'll feel free so start waltzing into schools with explosives, probably this week!!!!!!

Now, if you're not into Muslim Panic stories, you could look at it the way Mike Senese and Jordan Bunker, editors at Make Magazine, did -- a day before the more ballyhooed piece in Artvoice ran. Instead of screaming "hoax," they said it looked exactly like the kind of project a 14-year-old might throw together in 20 minutes the night before school, to show his electronics teacher that he liked to tinker:

Inside it, the electronics appear less as a combination of miscellaneous parts wired together into a timepiece, and more so as simply the guts of a standard digital alarm clock [...]

Ahmed should be proud of his build. All 14-year-olds possess curiosity about taking things apart and putting them together; this is integral to learning and growing, which allows us to understand and master technology. It’s an extremely unfortunate situation that none of his teachers were able to understand the build, nor his intention to connect with them and find someone to foster his creative desires.

But ... but ... but ... he's not a genius! It's not a real invention! He LIED when he said he "built" or "invented" it!!!! The comments section at Make is a fascinating look at how a bit of kludged-together technology can serve as a Rorschach test. Most of the techie folks (the regular readers) are saying things like, "Oh, hey, that pencil case is a much better container for clock innards than the cigar box I used when I was 12," and most of the new arrivals are insisting that Ahmed is a tool of a huge propaganda hoax intended to create sympathy for Muslims (and maybe to con his way into MIT or to make us all let our guard down!!!) The righties insist that Ahmed is a scheming little liar for using words like "built" or "invented," and the Maker types are perfectly cool with those words, pointing out that they regularly call putting a bunch of factory-made parts together "building" a computer, even if they didn't create a single component from scratch, and that unless a kid tries to take the thing to the Patent Office, it's perfectly OK to call their creative re-building of a clock an "invention." Needless to say, Yr Dok Zoom is on the side of the creative hippies here; I'm writing this post on a computer that I say I "built" by transferring the wimpy guts of a cheapo eMachines computer into a bigger case with a more robust power supply, a lot more RAM, and a video card that can actually handle games. Better indict me for perjury.

We'll leave you with the Deep Thoughts of paranoid crazy person Debbie Schlussel, who worries boy bands will make your daughters Muslim. She frets that "we don’t know that [Ahmed] Mohamed didn’t have instructions from someone to do this and test the system or conduct a dry run" and complains that Irving police didn't even seize the family's computers or cell phones like they should have, and warns that because of political correctness, we have no way of knowing what connections to terrorists Ahmed really has. And we'll probably pay the price for that:

Anyone who “stands with Ahmed” might have ended up having their legs blown off their torso and straight across the room. But they’re too stupid and knee-jerk in their tears and sympathy for the religion of the 19 hijackers to have a clue [...] next time, that “clock” might kill a lot of kids.

Not that she's overreacting or anything. That's only what liberals do in thinking that Islamophobia played a role in this story and the backlash.