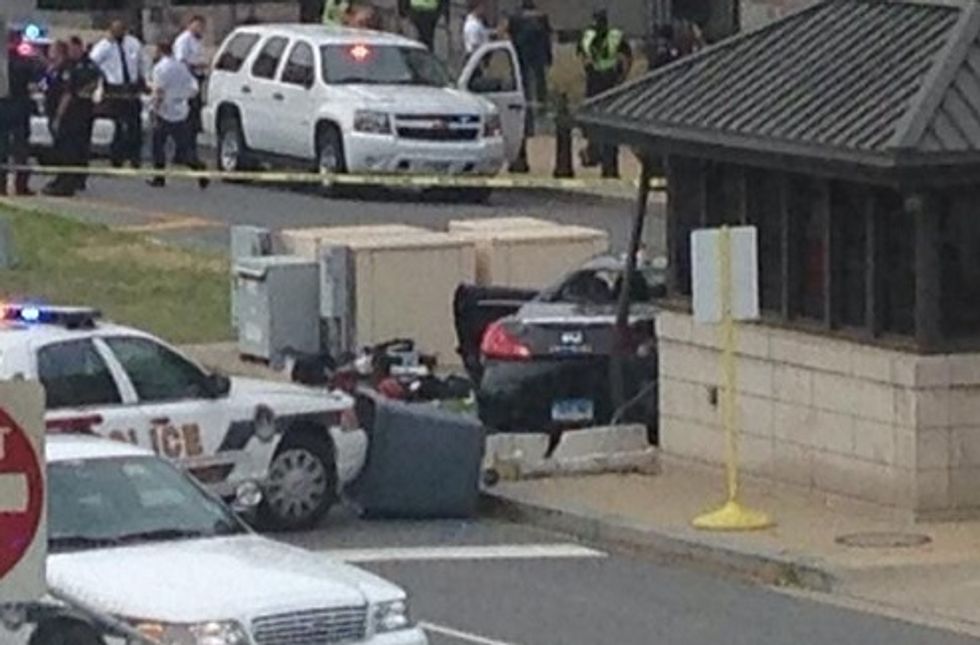 4 shots were fired outside the U.S. Capitol at about 2:15 today; Wonkette Editrix Rebecca Schoenkopf was about a block away when she heard "four sharp bursts of gunfire," followed by a "loud boom." Twitter messages indicate that the Capitol is in lockdown and that a suspect may be in custody; Rebecca says that she overheard a plainclothes capitol police officer telling a uniformed officer that "an officer is down" on 15th Street. (Update: Early reports that a police officer had been shot appear to be erroneous; see 3:45 and 4:02 updates below) She has taken some video that she's in the process of uploading; we'll have it for you as soon as possible. [Update: Probably not anytime soon. Computers -n- smartphones are difficult]

Please keep in mind that as information comes in, we're likely to get a lot of contradictory reports; we'll try to label things as accurately as possible.

2:50 And we already have our first boneheaded tweet from a member of congress, the winner is Tim Griffin, from Arkansas district 2:

3:00 PM Several networks are reporting that a female suspect tried to ram the gates of (or a barricade at) the White House with a car. A chase ensued and the suspect is reported to be dead. Again, this is far from confirmed.

3:05 PM Chris Hayes tweets: "We're reporting that the Capitol is no longer in lock-down mode."

3:25 PMMedia Matters reports that, to the surprise of no one who's ever heard of him, Alex Jones has proclaimed the Capitol shooting a "false flag attack." Has anything ever just happened in this man's world?

3:32 PM Tweet by Jordan Sekulow (@Jordansekulow) shows vehicle that crashed at 2nd/Constitution. (We've cropped this from the original)

3:38 PMRep. Tim Griffin is walking back his "not helpful" comments:

The victims and their families are in my thoughts and prayers. The shooting today is a terrible and inexcusable tragedy and an act of terrorism. No one but the shooter is to blame. We are still processing information about this shooting, but as I have been saying for days, we all need to choose our words wisely because violent rhetoric only coarsens our culture, creates an atmosphere of incivility and is not helpful. I tweeted out of emotion but agree that the timing was not helpful.

3:25 PM: ABC News reports the child in the vehicle with the woman is unharmed.

3:38 PM: MPD says no officer was shot during the incident.

4:02 PM We'll be shutting down the livebloog now with a couple of updates: Salon is reporting that a police officer was injured in a car crash, not shot.

And finally, the required Pure Silliness from the incident: Shirtless Bro Witness:

4:27 PM One last link; video of the car driving away from the White House after trying to crash through barriers. From Dorsey Shaw at Buzzfeed.

4:45 PM And of course, some things never change. From NYT's Doug Mills on Twitter:

Hill Staffer checks his phone as Capitol Hill police take aim on the grounds of the Capitol.