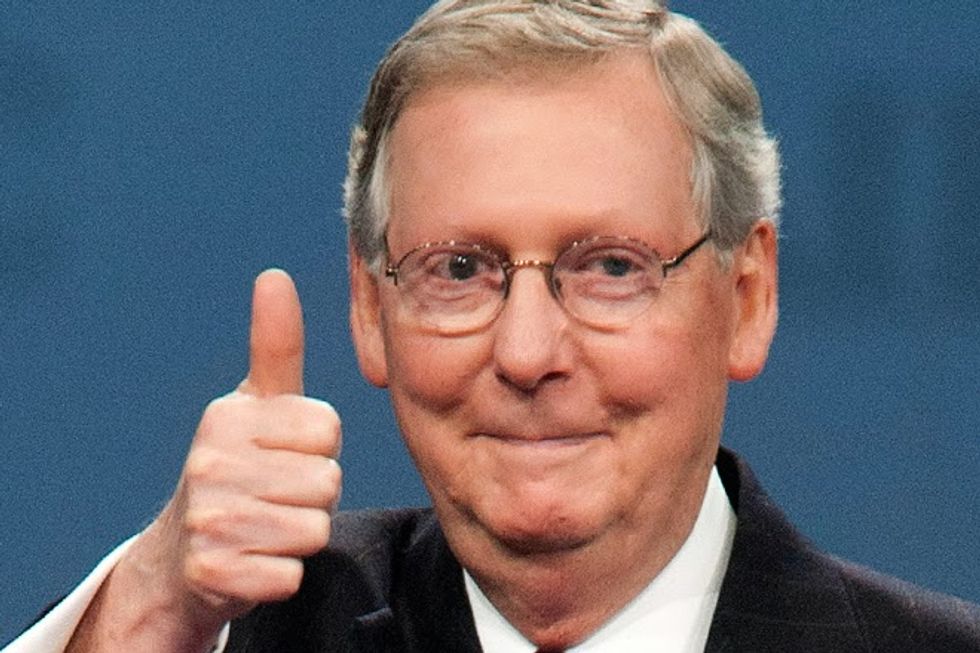 Hey, remember when Sen. Ted Cruz (R-Calgary) refused to commit to supporting Mitch McConnell as Majority Leader, right after McConnell engineered a takeover of the Senate? It's a politically sensible position from a Tea Party contrarian dickhead senator, and surely it presaged the kind of reasonable, policy-based debate that has become Cruz's calling card.

Well, the first battle in the McConnell-Cruz dick-measuring wars happened this morning, and we know you're all looking forward to reading about Ted Cruz's principled challenge to McConnell's inside-the-Beltway leadership. To the Twitter machines!

Unanimously? Does that mean Ted Cruz voted for the Kentucky Kompromiser?

Cruz's refusal to endorse McConnell on election night was prophylactic, and no, you can't unsee what your mind's eye just saw. Cruz gave his non-endorsement in an effort to put distance between himself and whatever actual governing McConnell deigns to do. It's purely a political calculation, and one designed to prevent Cruz from having a turtle around his neck in November 2016. But when the TV cameras were no longer rolling, and it was just the Republican senators talking among themselves, Cruz fell right in line.

Cruz might be keeping his powder dry for the upcoming fight on immigration -- or for an upcoming Revolutionary War reenactment, who knows? -- which would further enhance his reputation as a constantly campaigning and deeply cynical legislator. But that's exactly what the Republican primary electorate appears to want in 2016 -- a Tea Partier on the streets, but an establishment freak in the Lincoln Bedroom.